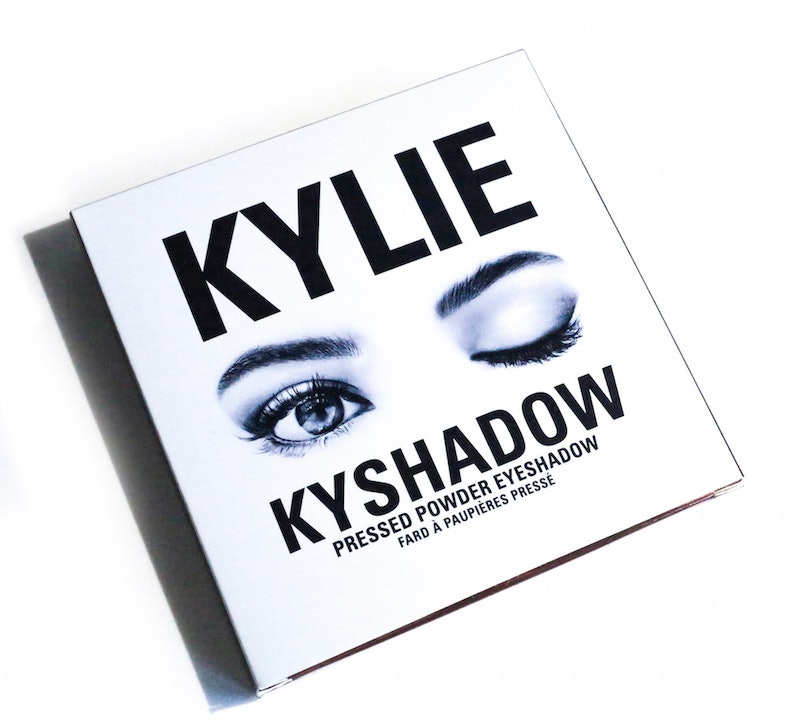 Kylie Jenner's Kylie Cosmetics brand is slaying the makeup game. From selling out entire Birthday Collection kits, to teasing potential new lip kits online, to fanning the pandemonium of flames with #Summersurprises, she's killing it. Now, Kylie Jenner teased new Kyshadow palettes on her Snapchat, so get ready Kylie Cosmetics fans, because they're on the way. Unfortunately, when Jenner took to her Snapchat to tease the two new palettes, they were in black and white. That doesn't mean some details didn't sign through though.

On Monday, Jenner's Snapchat was practically on fire when it came to sly Kylie Cosmetics news. Early on in the day, Jenner was snapping from a Kylie Cosmetics photoshoot which seems to feature new lip kits shades. While these snaps were also in black and white, they were nonetheless exciting for fans looking for another new lip kit after the launch of Leo. Jenner, however, took it one step further.

The images of the new KyShadow palettes shouldn't be a surprise, though. Jenner is known to post sneak peeks of her upcoming products. However, that doesn't make it any less exciting that Jenner posted a KyShadow sneak peek on her Snapchat. Though the image is in black and white, there are still some elements that can be discerned.

So far, Jenner hasn't given any other details about her two upcoming Kyshadow palettes. When the KyShadow Bronze palette originally launched, Jenner did tell fans that two more palettes were coming, and now she's given us all a look. So get ready Kylie Cosmetics fans, because two new palettes are coming your way.