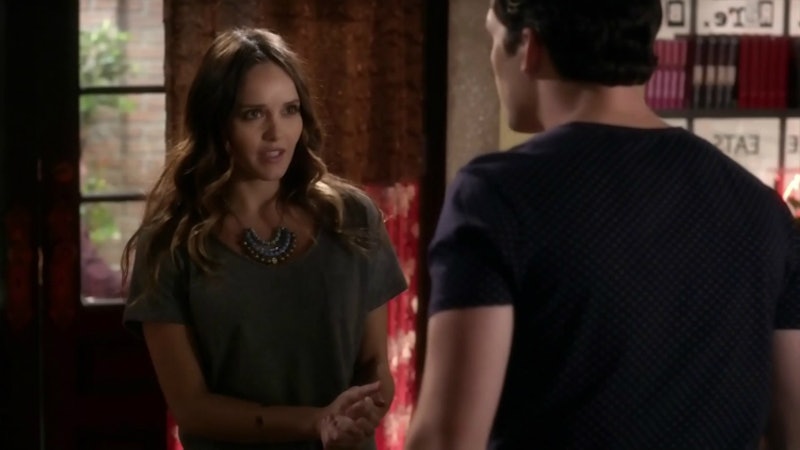 Things are basically as close as peachy keen as they can get in Rosewood for Ezria. So much so, it's easy to forget that mere months ago, Ezra was in deep, alcohol-soaked mourning for his longtime girlfriend. Time has passed, but his ex has been brought up recently, which may not be an accident, because if you recall what happened to Nicole on Pretty Little Liars , you'll realize how likely it is that we could see her again.

Nicole and Ezra met at the end of Season 6A, which means they dated for most of the five-year time jump. They met through Emily at the Brew — Nicole and Emily had volunteered for Habitat for Humanity together, and when Emily blew her off for Sara Harvey (this was before the Black Widow/Red Coat reveal), Nicole ended up hitting it off with Ezra. Then, when the show returned for Season 6B, we found out that during those five years, she had gone missing after being kidnapped by revolutionaries in Colombia, and was eventually presumed dead. However, a body was never found, which is a significant detail on a show where characters believed dead rarely stay that way.

In Season 7, Nicole was pretty much part of the past... until Aria picked up a strange call from her number on Ezra's cellphone. There was no answer when Aria picked up, just indecipherable sounds, and after talking to Emily, she decided to hide the interaction from Ezra completely, even going so far as to delete the call from his phone. No matter what ends up happening with the whole Nicole plotline, I think we can safely assume that this decision will come back to haunt Aria. After all, the synopsis for the Aug. 9 episode, " Original G'A'ngsters," states that Ezra will receive a "call about someone from his past,” which definitely seems like a potential nod to Nicole. Even worse, the synopsis further elaborates that the call "may change his course."

With all that in mind, it seems most likely that Nicole will return and if/when she does, you can bet she'll wreak havoc with the Ezria engagement. I mean first off, Ezra's definitely going to have a problem with the fact that Aria deleted Nicole's call — and engagement or no engagement, the return of his tragically presumed dead former girlfriend might stir up old feelings.

On an even grimmer note, we should also consider the possibility that she could be involved in something darker. A Habitat for Humanity volunteer getting kidnapped by revolutionaries doesn't exactly scream A (or A.D., as the case may be), but it could be part of some sort of elaborate cover-up, especially since Nicole had ties to both Emily and Ezra.

Any way you cut it, that deleted call was a definite harbinger for bigger Nicole-related problems to come — and it'll be great to the storyline unfold with Pretty Little Liars' signature dramatic panache.