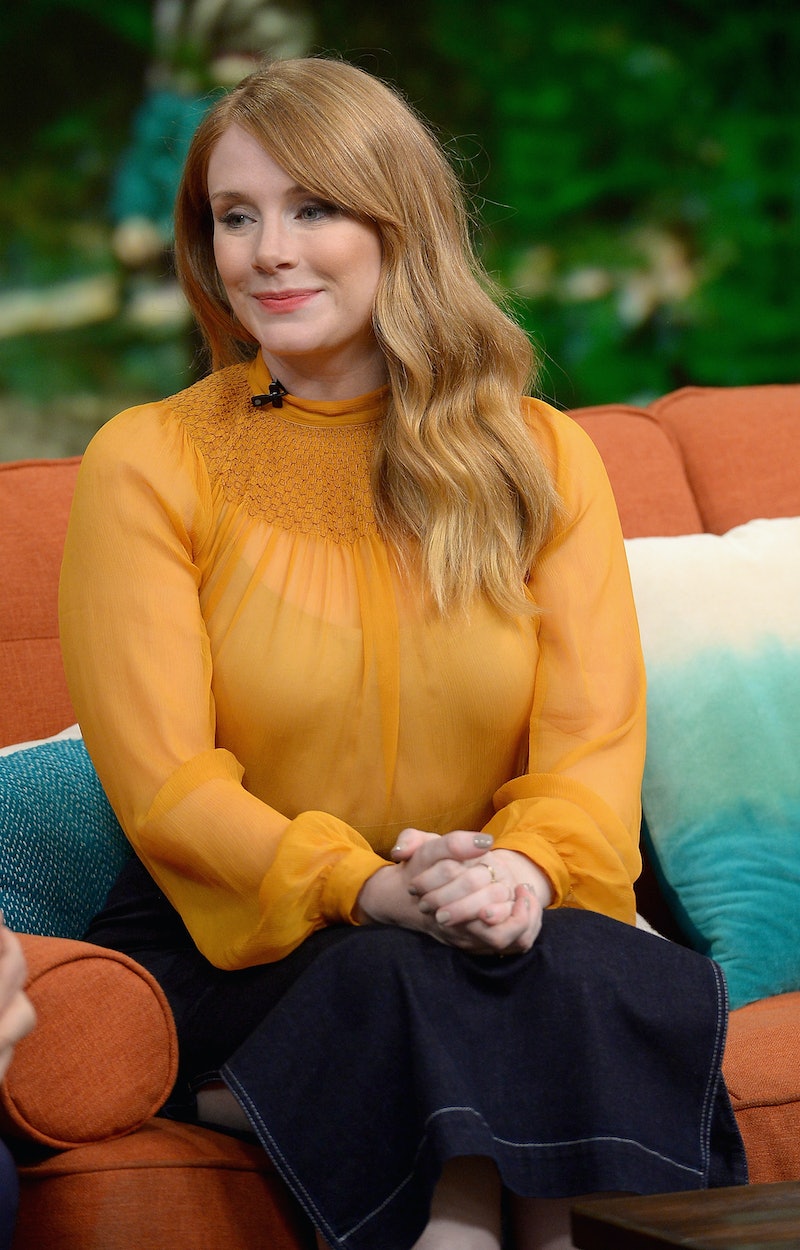 Outside of a cozy movie theater where magic, happiness, and friendly dragons are very much real, some truths of our world are terrifying. It’s a ballsy move to even turn on the news these days, and call me crazy, but I feel nervous to step outside of my home at times. I can’t imagine what it would feel like having children to think about, too. After speaking with Pete’s Dragon star Bryce Dallas Howard about raising kids in the current climate of the country and the world, I realize the fear for a mom in our day in age is very real, but also, worth fighting for.

The reimagining of the iconic giant dragon Elliott in the film (out Friday) is incredible, as is the fearless nature of his young friend Pete (Oakes Fegley) and sidekick Natalie (Oona Laurence). For example, in a scene where the kids are trying to free a trapped Elliott, they take the wheel of a truck and insist Mr. Meacham (Robert Redford), who says he’ll drive, to “get in.” They’re two admirable, young rebels fighting for what they believe in. But being a rebel in real life (and raising kids to be) isn’t that simple. Howard, who has a nine-year-old son and four-year-old daughter, explains the fine line.

“Something can be a strength until it’s taken too far and then it’s a weakness. You want to [instill] in your children the desire for independence and being rebellious for the right reasons,” she explains. I ask Howard how a parent goes about teaching their kids to stand for what they believe in, even though the repercussions can be fatal.

Encouraging those things are great and sometimes it is going against a person in a position of authority. I think it comes down to: What is the central message? What is at the center of this that justifies all of these various things that are happening? And making sure at the center of it that it’s good, it’s for something positive. That’s what I want to definitely encourage in my own kids, for sure.

Howard seems confident in her methods to instill positive and strong qualities in her children. That said, when I tell her I’d be fearful on some level to bring kids into the world right now, she completely empathizes and, in fact, agrees. She says this is something she discusses with her own parents all the time. Luckily, their words of wisdom have helped guide her in being positive and gaining perspective. “They’re like, ‘Listen, when we were growing up, it was the Vietnam War, it was the Civil Rights movement, it was Kent State,’” she recalls. “They were born into a world where segregation was legal. So much changed during their lifetime. There was a lot of hope that existed within revolution. Also a lot of loss,” she says.

She says her famous father Ron Howard has also recalled the difficulties of growing up in Los Angeles, which, while difficult to hear, was eye-opening as well. “My dad was saying, ‘When you were a kid, right around the time that we left LA… people were shooting each other on the freeway,’” she says. Case in point (as her father once told her): There are so many reasons to not have children. However, this is the reason her dad, and ultimately she, were motivated to want children.

“You want to bring goodness into the world. You want to be part of the solution,” the 35-year-old says. “We are an evolving species. While none of us want to saddle our kids with a legacy that is heavy with loss and that feels hopeless, we need to do our best and be active about it,” she explains.

As heartbreaking as the world can be, Howard holds on to her parents’ advice and her own hopefulness to remain positive, and encourages all women to do the same. “We need to have faith that there are people coming into the world who, as every generation, have something to offer and give and have a vision for the future. If you feel called to, have kids. It is scary, but it’s motivating. It makes me, as a parent, not want to be complacent,” she says.

I leave Howard feeling inspired, realizing that famous or not, every mom (and woman) is just doing the best they can to not only get by, but to fight.