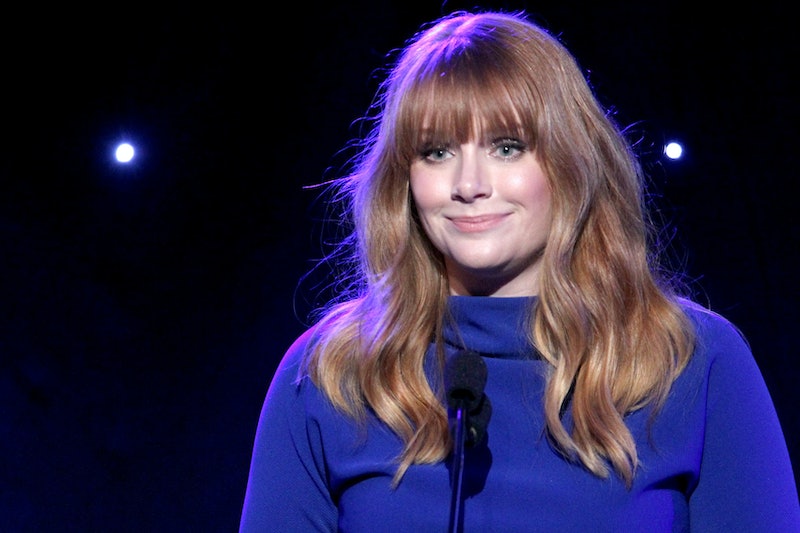 When 35-year-old Bryce Dallas Howard isn’t fighting off dinosaurs on the big screen, she’s got her own little animals to deal with — at home, that is. The actress killed it in Jurassic World last year, and as she gears up for the sequel, set to premiere in June 2018, she’s juggling a 9-year-old and a 4-year-old between set visits and script memorization. If there’s one thing Howard thought she’d have down more than acting, it’s parenting. That is, however, until her first little one came along. She admits: “I knew nothing.” Because the thought of parenthood didn’t sort of/totally freak everyone out already.

Howard has two kids with her hubby of over 10 years, Seth Gabel — a son, Theodore, who’s approaching fourth grade, and a daughter, Beatrice. “It’s a crazy time in my house,” the actress says at the Motion Picture & Television Fund’s Reel Stories, Real Lives event in Los Angeles on Thursday evening. “[Theodore] is like a person, he’s like a pre-teen,” she says. “And then with my four-year-old, it’s just that delicious age where they really, really love you and want to cuddle with you. I know there’s potentially an end to that [but] I mean, I’m loving that.”

Right now, life is hectic, yet manageable and seemingly positive for Howard. However, she’s faced real, dark struggles in being a new mom. If you recall, she was brave enough to disclose her detailed challenges (like “feeling nothing”) of postpartum depression on Gwyneth Paltrow’s site Goop .

The incredibly challenging struggle of PPD aside, it’s the unforeseeable day-to-day tasks that completely continue to throw Howard for a loop. And she was prepared. Extremely prepared. “I was the oldest of four and I nannied for four years and I worked at a daycare for three years and I was like, ‘I got this,’” she tells Bustle. “And then I had my first child,” she laughs. “I knew nothing.”

Crap. I nannied for, like, one year. Should I be scared?

Maybe not. She admits a lot of the time, handling small kids and a career can feel “impossible” and explains, “Things just feel like [they don’t] add up. You’re like, ‘Wait, I need to be dropping him off and dropping her off at the same time, how am I gonna do this?’” But Howard proves it’s a journey many women endure and come out of stronger. “[It’s] the juggle of life,” she ensures. “What everybody goes through with kids. I think until you have a kid, it’s difficult to understand.”

So maybe it’ll be OK after all. And one day when you do have toddlers pulling at your couture, just remember: What would Bryce Dallas Howard do?