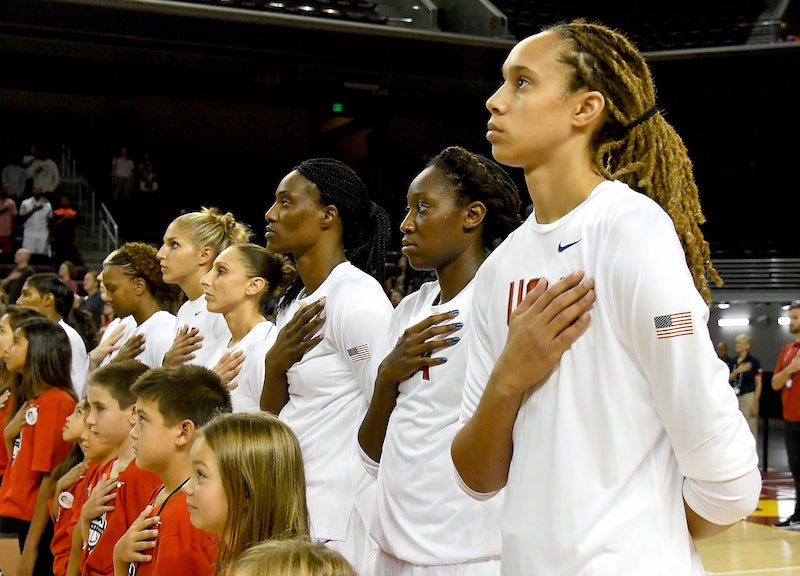 The 2016 Rio Olympics have only just begun, and Team USA is already killing the game, from the U.S. women's basketball team's incredible Sunday night victory over Senegal to 19-year-old swimmer Katie Ledecky breaking her own world record. The women of Team USA aren't only setting records on the court and in the pool. As a matter of fact, they broke this year's first Olympic record even before the opening ceremonies began. Of the 554 athletes representing the U.S. in Rio, 292 are women — this year's Team USA roster includes the most women of any country's delegation in Olympic history. And that's something to be proud of.

"Sport, and the Olympic Movement in particular, has always had a unique ability to inspire our nation and unite the world," U.S. Olympic Committee CEO Scott Blackburn said in a statement. "These Olympic Games will be no different in that regard, as 555 Americans rise to their best and make our nation proud. I am especially excited for the historic achievement of our women's delegation, which is a true testament to the rising strength and growing number of women's sport opportunities in the United States."

Not only is Team USA composed of a record-breaking number of women, but its female members are also among the top-ranked athletes in the world. The U.S. isn't lacking in female athletes, and these all-American women are definitely not lacking in athletic quality.

Take the U.S. women's basketball team, which set three records in a single game on Sunday night and defeated Senegal 121-56. On Monday afternoon, the U.S. team beat Spain 103-63, securing their second of what will probably be many Olympic victories. The women's team hasn't lost an Olympics since 1992 — the team's youngest player, Breanna Stewart, was born in 1994, meaning the team she reps has been undefeated for her entire life. Then there's the U.S. women's soccer team, which recently won the 2016 Women's World Cup, making them the first-ever women's team to win three World Cup titles.

Team USA's women aren't just making history with their athleticism. They're also one of the most diverse Olympic teams in history. From Ibtihaj Muhammad, the first U.S. athlete to wear a hijab to the Olympics, to 19-year-old gymnast Simone Biles, who overcame a drug-addicted mother and a brief time in foster care, and is now one of the best athletes in the world. This year's immensely talented, diverse group of U.S. athletes prove that there's no template for what an Olympian looks like or where she comes from.