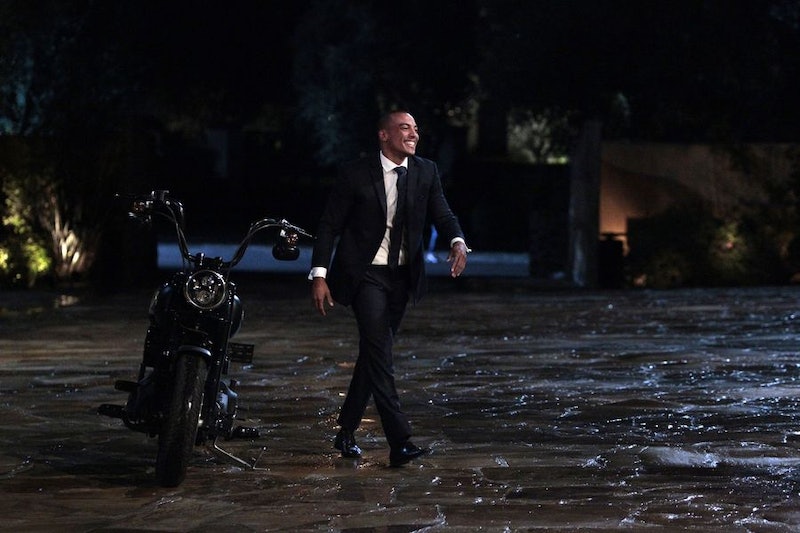 Christian’s out-of-the-limo pre-interview was probably the most interesting out of the other Jimmy Neutron clones on JoJo’s season. He described himself as “the most motivated guy you’ll ever meet,” and he wakes up at 3:30am every day to go to the gym. I hope he won’t get up that early in Paradise, mostly because everyone is probably still drinking at 3:30 a.m. A tech consultant by trade, Christian has also battled some serious stuff. In his bio package he revealed that he’s biracial, with a black mother and a white father, and said that he was ignored by his father’s family for most of his life. According to his intro, his paternal grandfather was a hardcore racist, and no one on that side knew Christian existed until he was in seventh grade, and, even then, Christian wasn’t allowed to see his father’s family.

All of that hate could weigh someone down, but Christian seems like a buoyant, hopeful kind of person. He’s raising his two younger brothers, he’s hitting the gym, he’s doing his tech consultant job, and now he’s on Bachelor In Paradise. We really didn’t see a lot of him on The Bachelorette — basically, all of the Chad versus the rest of the house drama took over that season, and Christian didn’t last long enough in front of JoJo to really get to know him.

But, I want to get to know him, and I'm excited to starting Tuesday night. And, here’s who I think Christian should get to know on Bachelor In Paradise 3 .

So Lace and Grant seem to be hooked up already, but Christian could be a really nice counterpoint to Lace. Lace has had some struggles in the past (she said as much on Ben’s season of The Bachelor and removed herself from the show to work on herself), and Christian has overcome his own set of struggles. I think Christian could show her that there is another side to life’s problems — it’s all about perspective.

Amanda is the single mom in this crew, and Christian is helping to raise his younger brothers. His brothers are older, sure, but both Christian and Amanda know what its like to have to put someone else’s needs above your own. Plus, they would make some seriously adorable babies together, too.

So Ashley I. isn’t on Bachelor In Paradise quite yet, but she’s in the previews crying over Jared (still), so it’s a safe bet to say she’s on her way. When Ashley’s not crying, she’s a lot of fun, and Christian seems fairly reserved. She could draw him out of his shell, and maybe he could help her get over Jared. This is a win/win combination here.

Whoever Christian chooses in Paradise, I’m just glad to see him again. He was wasted on The Bachelorette, and he totally deserves another chance at love.