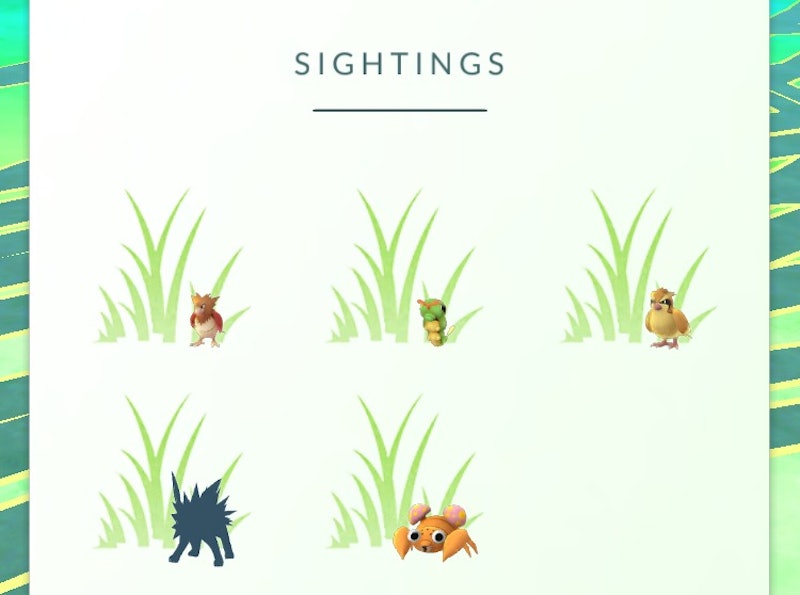 It was a "Pokemon Go" glitch that confused players to no end — the little footsteps that were supposed to tell you how close by a Pokemon kept straight-up lying to you about how far away that Abra (or Jigglypuff, or Clefairy, or...). Then developer Niantic removed the feature completely, and all hell broke loose. But worry not, Trainers: "Pokemon Go" is testing a new "Nearby Pokemon" tracker in the app's latest update that will — fingers crossed — once again tell you whether you're hot or cold on your hunt for the little monsters.

This exciting update is Niantic's answer for the previously malfunctioning Pokemon tracker — something that would have been an invaluable tool for Trainers if it had worked properly. What it was supposed to do was identify how far away a nearby Pokemon was from you: If one footstep displayed next to the Pokemon's icon in the tracker, it was quite close; if two footsteps displayed, it was at a bit of a distance; and if three footsteps displayed, then you'd have to go even further afield to find it. However, the "three-footstep glitch" resulted in every Pokemon displaying three footsteps, making it impossible to know where all those little critters were.

Niantic pulled the footstep tracker after the July 31 update, stating on the "Pokemon Go" Facebook page, "We have removed the ‘3-step’ display in order to improve upon the underlying design. The original feature, although enjoyed by many, was also confusing and did not meet our underlying product goals. We will keep you posted as we strive to improve this feature." But in the Aug. 8 "Pokemon Go" update, a new and hopefully improved tracking feature has appeared for some users: According to the release notes, Niantic said, "We're currently testing a variation of the 'Nearby Pokemon' feature with a subset of users. During this period you may see some variation in the nearby Pokemon UI."

Currently, players are experiencing different things in terms of the updates. Some are merely seeing which Pokemon are nearby — a feature in its own section called "Sightings":

Others, however, are being given huge hints to where they can find Pokemon in the "Nearby" section, with the game giving them the closest Pokestop to that specific monster. Thus, it's not telling them the exact location, but it's certainly putting them in the right spot:

No word yet on what this means for Trainers in more rural areas, who likely have fewer Pokestops to work with.

If you haven't yet noticed any changes, hang tight, because they might be on the way. For now, it looks like the majority of the users testing out the new "Pokemon Go" feature are in San Francisco, with a few other sprinkled throughout Melbourne and Bangkok.

Similar to how the original tracker worked, the new one "pulses" the area every 10 seconds, refreshing itself to show you who's nearby. Also similar to the previous tracker, you simply start walking in a direction to see if there are nearby Pokemon, and hunt them down from there.

Happy hunting, Trainers. And please remember to look both ways before you cross a busy street to catch a Pokemon.