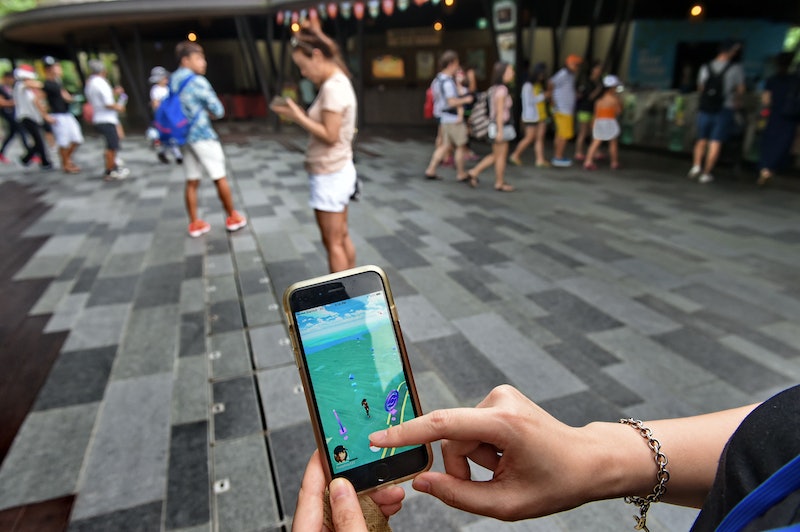 If you've been playing "Pokemon Go" (and, honestly, who hasn't?), you probably know a little something about the uproar over the tracking system. When Niantic removed the tracking feature altogether in the last update, players lost their minds... but in the newest "Pokemon Go" update, tracking is back, friends. Albeit with a few changes, so let's break those down.

When "Pokemon Go" first came out, the game included a "three-step system," which indicated the proximity of specific Pokemon to the player. (Those were the good old days, amirite?) If a Pokemon had one footstep beneath its picture, you were close. If it had three, you could expect to walk for a while in order to find it. However, within a few days, every picture displayed three footsteps due to server overload, no matter how close the Pokemon actually was to you. This became known as the "three-step bug," and it was one of the biggest annoyances that hardcore fans complained about.

Then, when an update went live a week and a half ago, the tracking system disappeared completely. Players went bonkers as they vented their frustration over social media.

I myself was moderately annoyed, but appreciated that Niantic had removed the mechanic from the interface if they weren't planning on fixing it. I didn't expect that Niantic would try anything else related to tracking... but I was wrong.

In another update that became effective for most players on Aug. 8 and 9, tracking is back. It doesn't resemble the three-step system of yore, however. Instead of footsteps, nearby Pokemon have a grass illustration that appears behind their image. According to Forbes' Paul Tassi, who's been testing the new feature, the tracking system works by pulsing every 10 seconds to find the Pokemon that have spawned and de-spawned near you. It then updates the list of nearby Pokemon in the bottom left-hand corner of the app. Tassi says that, to use the system, you simply pick a direction and walk. If the Pokemon you're tracking disappears from the list, turn around and go back. Repeat as many times as needed until you stumble upon the Pinsir or Porygon you're hunting.

This, by the way, is not technically a tracking system. Niantic is calling it the "nearby" feature, and it has other plans in the works for tracking. Certain players have been trying a new tracking method that ties Pokemon to specific Pokestops, so you know where to head. I can't really comment on this update, since it hasn't become available for me. However, the latest tracking system, if implemented, would take most of the guesswork out of the Pokemon-catching equation. While convenient, it also eliminates a lot of the fun of hunting down Pokemon. If you know exactly where that Scyther is, going to catch it seems more like running errands.

Tracking isn't the only thing the newest "Pokemon Go" update changes. If you're going too fast, the app will assume that you're driving or biking and issue a prompt that tells you to stop. You can soothe its fears by telling it you're just a passenger, so the warning isn't foolproof. Still, it helps dissuade people from playing and driving.

Also, it seems to be somewhat trigger-happy. The message popped up on my screen this morning while I was sitting down, drinking a latte. Slow your roll, I thought, the only part of me that is going fast is my brain as it processes caffeine.

Finally, the update fixes a glitch that prevented the proper amount of XP being rewarded for Pokemon catches, and battery saver mode is back (Mew be praised).

We'll have to wait a few days to find out how Niantic plans on implementing both the nearby and the tracking systems, since it seems like most players only have access to nearby at the moment. Until then, I'm outta here. I have an Omanyte to catch that keeps showing up on my street.