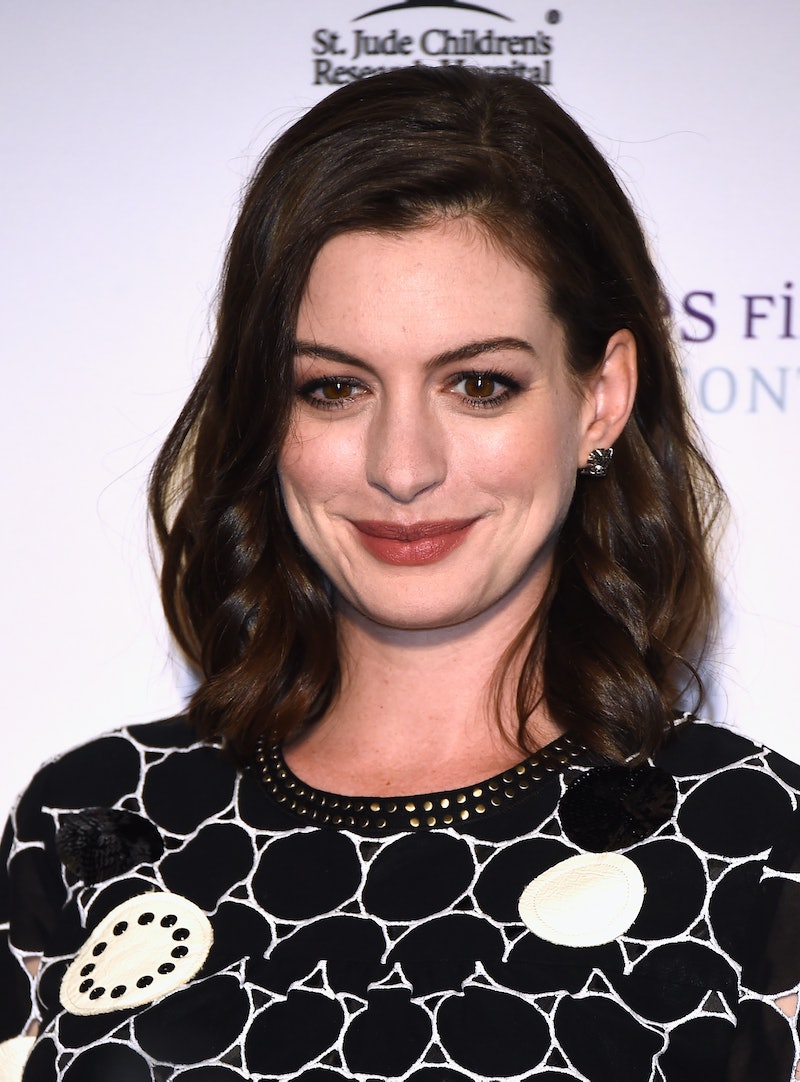 For a lot of people, struggling with being comfortable with their weight can be a lifelong issue, and it can become an especially sensitive topic for women who have recently had a baby. And even though celebrities seem superhuman, they're totally mortal, and they're affected by it too. Case in point: Anne Hathaway, who welcomed her first child last March. On Tuesday, Hathaway opened up about her post-baby weight on Instagram, and the message she shared was actually really inspiring — and it came out of something as simple as her decision to turn a pair of jeans into a pair of shorts that made her feel a little more comfortable with what her body looks like right now.

Although the photo is just of the jeans, her caption is what's really important here. Hathaway uses that space to remind us of one simple truth: Gaining weight, whether you just had a baby or not, is nothing you should ever be ashamed of, even if that means you don't feel comfortable wearing short shorts in the summer. As she writes, no matter how your body changes, if it gets bigger or smaller, that's OK, and that's something that a lot of people — including me — tend to forget.

For me, Hathaway's words hold a lot of meaning. I'm getting married later this summer, and over the past year of planning, I've also been trying to lose weight. There's so much pressure to look the most beautiful you've ever looked on that one, all-important day, and it's easy to let that pressure get to you. After all, most of us have been taught to equate beauty to a number on a scale since Day 1. So far, I've tried it all: Weight Watcher's, doing tons of cardio, taking regular barre classes, eating all kinds of green stuff that grows in the ground that Ron Swanson would never classify as food. It's hard not to get caught up in the voices that tell you the only thing that matters is how you look in that dress.

But here are the facts: Right before your wedding is a terrible time to try to lose weight. You're busy, you're stressed out, and even if you're trying to eat more vegetables than cake, sometimes you just need to eat the cake. And after struggling with the way I look for months, I've come to the conclusion that it honestly doesn't matter what I weigh on the day that I marry my favorite person. And if it doesn't matter on that day, why should it matter on any other? So now that I've made peace with it, I'm going to focus on enjoying this special time with my fiancé, because I'll never get it back. And if I want the cake, I'm having the cake.

And just like the time you spend planning a wedding is a difficult time for weight loss, so are the months after you become a mother. You're bonding with your new baby and trying to survive on little to no sleep, and you're also supposed to be working out and dieting to lose those pounds you gained while you were literally growing a human? I've never had a kid, but I imagine that pressure is similar to what I've been feeling lately, and it's not fair. If that's what Hathaway's dealing with right now, I just want to give her a hug.

Then, add in the fact that as a celebrity, everyone's paying attention to your post-baby weight, waiting to see how long it will take you to shed those pounds. You're a new mother, and you're having to field questions about the diet and exercise regimen you plan to use to make it seem like you never had a baby in the first place. It has to be so difficult to have that spotlight on you, and I'm glad Hathaway is talking about it.

What the actor is saying is so relevant to what I've been experiencing lately, and I know I'm not the only one. So if you're struggling too, take comfort in the fact that the former princess of Genovia is dealing with those same emotions. Weight is a number on a scale; it doesn't define you. Neither does the length of your shorts. If you ever forget that like I do, just reread Hathaway's words. She's totally right, and I'm so thankful she shared them.