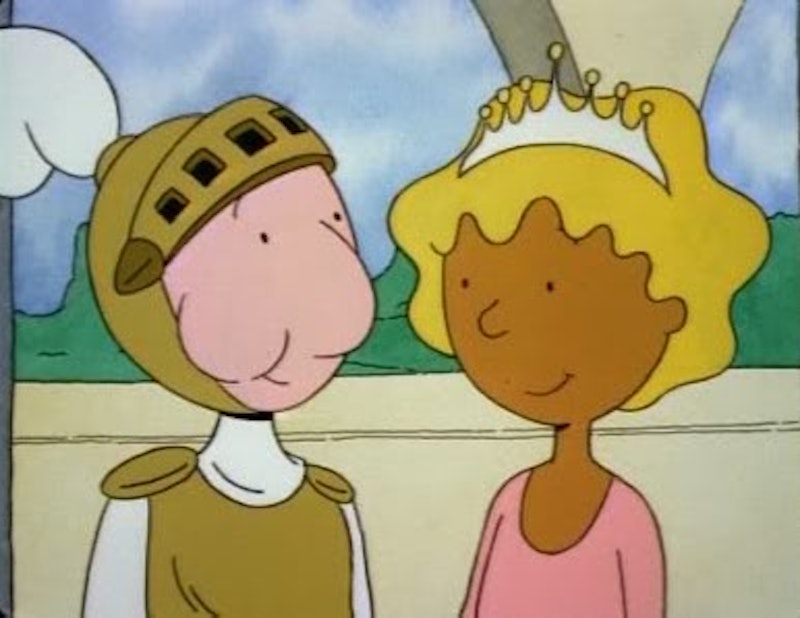 In case you don't already feel ancient, it seems like a bevy of our favorite '90s Nicktoons are about to turn 25, and that includes one of the OG Nick mainstays, Doug. Naturally, our nostalgia-obsessed minds are wondering if a Doug reboot is in the works to celebrate, and the sad news is that Disney currently owns the rights and has no interesting in reviving the series. But if the day ever comes, creator Jim Jinkins already has plans for a series sequel, one that would answer the age old question of, "Would Doug Funnie and Patti Mayonnaise ever get together?"

In an interview with Entertainment Weekly, Jinkins revealed what it was like reuniting with the real Patti Mayonnaise. After skipping out on his 10 year high school reunion, he got a phone call from this Real Patti Mayonnaise, saying she didn't see him there but found out he lived in New York. How serendipitous: she also lived in New York, and invites Jinkins up for a dinner. Immediately, he starts freaking out over the romantic possibilities that could occur, and then he relayed:

I get to the door, and you get buzzed up in New York, and so I walk up to the apartment and I hear the lock turn — it’s getting ready to happen — and she opens the door, and she’s perfect. Just perfect... And she was just funny and fun and innocent, but it’s like Doug and Patti together again, ten years later, right? So this is all wonderful, right? And then she wheels and goes, ‘Oh, Jimmy, I want you to meet my husband.’

So, if art is imitating life in this scenario, Doug and Patti will not be the endgame... and that might be fine. As Jinkins was quick to acknowledge, most people don't end up with their childhood crushes. You're simply not the truest version of yourself when you're 11-and-a-half; you're just not. While the series acknowledged a true bond and friendship between Patti and Doug, one that did, in fact, culminate in a weird non-date, it seems implausible that they would be able to carry that over into something tangible as adults. Never mind the fact that Doug's crush always seemed to idealize Miss Mayonnaise... but that's just me.

If you're still shipping all these years later, though, not all hope is lost. Jinkin's acknowledged that there's no rule that says he has to slight Doug in the same way, and Patti could simply be in a serious relationship instead of married. Even if that's the case, though, he has plans of possibly including a female friend for Doug, someone who's listening to all his Patti problems and, in a traditional rom-com twist, ends up with her instead.

Double womp womp. Sorry for kicking off the Nicktoon's quarter century anniversary by ruining your childhood, but at least take solace in knowing that this reboot is still on the shelves... for now. Until then, you can keep on penning your Doug and Patti fanfiction like the '90s never ended.