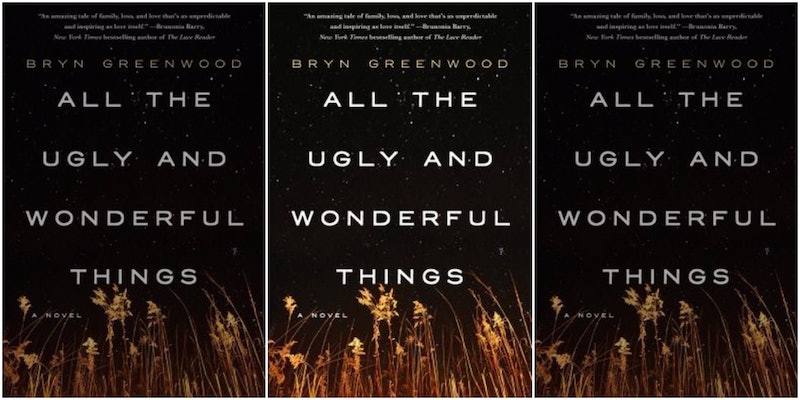 Wavy, a cherubic child with porcelain skin, doe eyes, and fair, golden hair, is just eight-years-old when her love story begins to unfold in Bryn Greenwood's haunting new novel, All The Ugly and Wonderful Things, out Aug. 9 from Thomas Dunne Books.

Simply described, All The Ugly and Wonderful Things is the story of how Wavy, the young daughter of a drug dealer and his abusive wife, and Kellen, a loner, drug runner, and ex-con, fall in love. But that definition doesn't do justice to the breadth of this painful, beautiful novel about two lonely, lost people who find their place with each other.

Despite the inevitable comparisons to Lolita , Greenwood's novel is not about pedophilia or the victimization of a young girl by an older man, and Kellen is not like Humbert Humbert. Greenwood's novel is about ugly things — mental illness, family discord, child abuse — and wonderful things, like the vast, healing powers of unconditional love and understanding. It's a novel that asks readers to step outside their comfort zones and step inside Wavy and Kellen's world without judgment.

"A lot of people really hate it," Bryn Greenwood tells Bustle. "A lot of people hate it because they read it and they don't in any way want to sympathize with the situation. And other people haven't read it, and they disapprove of the basic concept."

Greenwood, who began writing the novel in 2009, had a tough time selling the novel to agents as well. She previously published two novels with an independent press, but by the time she was ready to query All The Ugly and Wonderful Things , her former literary agent had left the business. She began from scratch, but after 122 agent rejections, she stopped querying her novel.

"I had played with the idea of self-publishing," Greenwood says. "At that point, it had been revised and polished. A lot of people said, 'It's a really great book. I just don't think I can sell it to anybody.'"

In a stroke of luck, Greenwood's current literary agent approached her after reading one of her previously published novels. From there, All The Ugly and Wonderful Things found its home and its place on the shelf amongst 2016's most acclaimed literary fiction.

All The Ugly and Wonderful Things by: Bryn Greenwood

It's not an easy novel to read. There are many things about it that are uncomfortable — namely, the child abuse suffered by Wavy and her younger brother at the hands of her unstable mother and self-absorbed father. In fact, the least uncomfortable passages in this book are the ones that are perhaps the most controversial: the touching scenes of tenderness and affection between Wavy and Kellen, who begin a more intimate relationship after Wavy enters adolescence.

Greenwood asks those who feel uncomfortable about Wavy and Kellen's romance to examine the root of their unease: "Did it make you uncomfortable, or were you made uncomfortable by the fact that you weren't really all that uncomfortable?" she asks.

The author says that some of the novel — which is set in her native Kansas — is loosely based upon her own life experiences. Her father was a drug dealer, and as a preteen, Greenwood dated older men. "I was made to feel isolated and ashamed about the fact that I had these relationships with much older men when I was young," she says. "There were people who were like, 'You don't know that you were victimized.' [Those statements] really suck your sense of empowerment. [They] rob of your narrative capacity."

And that, of course, is the entire point of All The Ugly and Wonderful Things: to voice the narrative of two individuals who have found comfort and belonging in a forbidden relationship. Over a dozen people tell the story of Wavy and Kellen throughout the course of the novel, each offering a different perspective on the facts of their story. Some of these narrators deeply disapprove of the affair; some find it strange; others disagree with their decisions but sympathize with their situation; and others don't care one way or the other. This juxtaposition of opinions allows Greenwood to present readers with a mostly unbiased picture of Wavy and Kellen's love story. At the same time, the differing perspectives serve as a reminder that no two people have the same life experiences and readers would be best served if they approached the novel with an open mind and open heart. You don't have to like the characters or like their choices, but to enjoy this novel, you must at least seek to understand them. All The Ugly and Wonderful Things is a novel that quietly demands empathy from its readers.

But Greenwood doesn't simply ask for understanding in her readers. She asks it of herself, as well. "[This story] required me to really get into those characters and ask, 'What are these people are about? What's motivating them?'" she says. "Once you can figure out what's motivating them, they are very sympathetic."