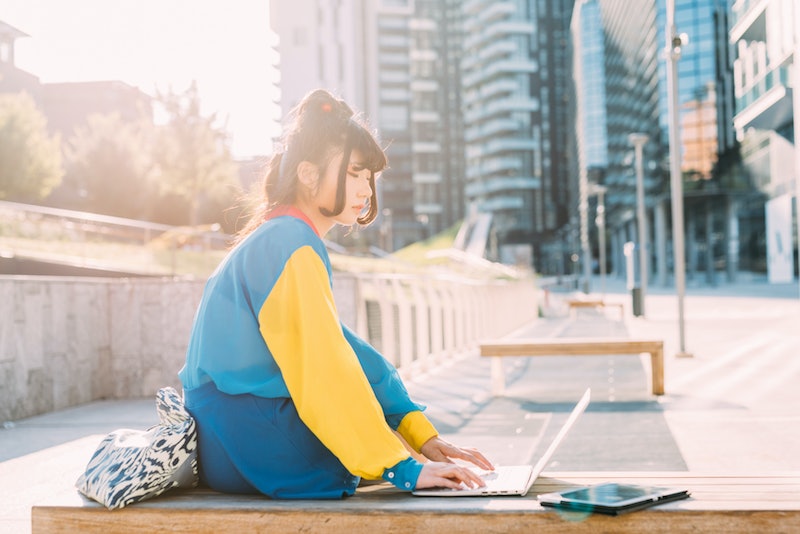 One of the first things I do when I realize a friend has gone through a breakup is sift through their pictures on Facebook and see if they’ve erased their ex from their social media presence. I do this because, 1) I’m a nosy, nosy human and, 2) I think the way that we deal with social media after a breakup can reveal a lot about how the breakup went. So, for example, a complete wipe of any evidence that a relationship ever existed is a pretty good sign that your friend and their partner did not part on good terms. However, if all that’s changed is a quiet removal or change of relationship status — and all pictures and events are still intact — than you can surmise that the breakup was sad (as all are) but relatively amicable.

I can practically hear the scoffing from older generations who were safely married long before Facebook was even a twinkle in Mark Zuckerberg’s eye, but for so many of us falling in and out of love today, what to do with social media post-breakup is a serious question. For some, a simple de-friending and unfollowing is enough but, for others, a complete wipe of everything is necessary. So I asked around to see how people are dealing with social media after a breakup. Here’s what 11 of them told me.

Most recently I've been feelin' that "out of site out of mind" vibe, so I unfollow on the ‘Book (but remain friends) and unfollow everywhere that it's not super easy to tell you've been unfollowed. I recently had it happen that I liked a picture from a mutual friend that was hiking with my ex and the caption said it was "national hike naked day" so I went out of my way to go to the exes profile and also like her naked hiking photo….

I definitely make sure my profile picture isn't one of us (but usually that has happened before the break), but I rarely delete anything.

Breakup shared on the old blog and to Facebook for all of our friends. We were together for so long and had built a community of mutual friends so wide that an online post was necessary.

My ex and I decided to change our relationship status, but made sure to click the setting that allowed it to not show up as a story in our friends timelines/our timelines. We didn't want our split being a big social media event, because it was personal. We also never went through and deleted any digital evidence of the history of our relationship because we cherish that chapter of our lives and it's part of our story.

I've been “married” to a platonic friend on Facebook for 10 plus years, from back when it was cool to be in Facebook relationships with your platonic girlfriends. A while ago she messaged me saying it appeared I may be in an actual relationship and if I wanted a divorce she understood. I had no desire to make my real romantic relationship Facebook official because it seemed like if a breakup were to happen, it would be incredibly annoying to be forced to make it public by changing my status. My boyfriend questioned it once, then proceeded to not care at all, and Samara and I remain happily Facebook married.

I deleted a few photos of us together, although didn't go through the whole thing. Haven't unfollowed on Instagram or Twitter, still friends on LinkedIn, and still see him pop up on gchat, which is oddly comforting. His best friend's wife unfollowed me on Instagram, however, and that hurt for some reason. She's still close friends with one of his exes who actually used to physically abuse him. So I unfollowed her out of spite. Haven’t deleted his number from my phone, because I have it memorized so that doesn't matter. Still friends with his brother on FB and Insta.

I guess I don't check it all that often, so it doesn't really bother me. It wasn't a hostile breakup, but something feels so final about blocking him on all fronts. We don't have any communication whatsoever; it's like he never existed or is just another random person on my list who I met once and never talk to.

I've had three major social media breakups. 1) Alex, sad but positive: We were young and stupid and in a long distance relationship. Our break was inevitable looking back now, and as Facebook memories reminds me, we still have plenty of shared online presence. We were too young, jealous, and far away to make it work, but it ended on good terms and we still talk today, though we rarely end up on the same continent.

2. Jordan, sad and chaotic: Our breakup was drawn out over two years and by the time we were finally, totally done, it was too painful to stay in touch. During those two years we blocked each other, unblocked, re-added each other, made up, fought, rinsed and repeat. We dated other people and I certainly obsessed over his new partners... Currently we're Facebook friends but it's been months since we talked. I mostly just like having him as a friend to see how he is and what he's up to. He still pops up on my Facebook memories from time to time, but I have to refrain from reaching out to him from sheer nostalgia.

3. Oscar, angry and chaotic: My freshest break up and the most painful to date. He cheated on me, we were living together, and I threw him out of my life, house, and social media pages with the same intensity that our relationship started with. I did keep some accidental traces of him here and there, but mostly I needed to cleanse him from my social media, with Beyoncé's "Irreplaceable" in the background, to start my healing process. We will never be friends on Facebook again after he harassed me online for months.

My recent breakup has been friendly but incredibly difficult as well. Technically, we broke up last fall but fell into seeing each other/sleeping together again after seeing each other on Tinder. Not exactly social media (or is it?) but we had agreed to stop being Facebook friends and thus our first contact in weeks occurred in a horrifying and terrible moment where we both realized that the other was looking for a casual relationship and this made both of us extremely uncomfortable.

In talking, I found that she started using Instagram more after our breakup. I started using Facebook more. While neither of us said it straight up, it seemed that both of us were trying to tell the world (and perhaps each other should we stupidly look one another up) that we were just fine and life was great. Even if we both were actually pretty sad and missing each other. It's also odd now to realize that her friends and family all still have access to my Facebook while I still have access to her Instagram and all of her friends posts and pictures which she will occasionally show up in. I've honestly debated deleting Facebook simply because the sight of her and the new boyfriend always feels like a punch to the gut. Or even pictures of her with people I don't know brings about strange feelings of jealousy and curiosity that I wouldn't otherwise have.

You have to unfriend and unfollow the ex. Also avoid social media for a while. Looking and thinking about what that person is up to is cruel and unhealthy for yourself (and them). The one time I didn’t do that at first, it was torture. In my experience and what I've witnessed is if you are cutting off a long emotional and intimate romantic relationship, you need to give yourself a clean cut to move on. Doesn't mean you can't ever return to being friends but you need to give yourself time to really move on, and by keeping tabs on what they're doing, who they're hanging out with — which is inevitable with social media — slows that process.

The first time, we tried to stay friends on Facebook but I disconnected him on Spotify and Instagram. But this time I disconnected him on Facebook (it became like our little chatting parlor, and way too much of our super sexy connecting would occur on Messenger) so this time I did that, but kept him on Instagram and Spotify... He's usually in private listen mode and every now and then he goes public, and it will alllllways be with something like, I introduced him to and we listened to together on a “special” night.

I first defriended him on Instagram because he posted a photo I took of him on the day we broke up. I was so hurt. It was like, a photo I took with my love behind it.

I got divorced in 2011, so I might have a different experience than most. Our breakup was sudden in some ways, certainly to friends. But after we'd been separated for a while, I changed my status to "it's complicated" from “married." Most people knew by then anyway so I didn't think it was a big deal. Turns out it was a big deal to my ex, who pretty much freaked the f*ck out on me the next time we met up to deal with logistical things.

He thought I should have consulted him, and that it was inconsiderate, and basically thought I was doing it to hurt him. Which I sooooo wasn’t — I just didn't like seeing "married" up there. For a long, long time, I made it so my relationship status was just hidden altogether because it didn't really seem to serve anyone to have to change it all the time. It was private until the last couple of years, since I’m, well, remarried. But even now it doesn't say "married" it just says "in a relationship" and it doesn't say with who because people who know me know who!

I had to de-Instagram and de-Facebook for the first time with a relationship because I didn't know what happened at the end of our relationship, and the internet just led to rampant speculation. It was long-distance lack of communication at the end. Sort of dissolution by estrangement, if that makes sense.