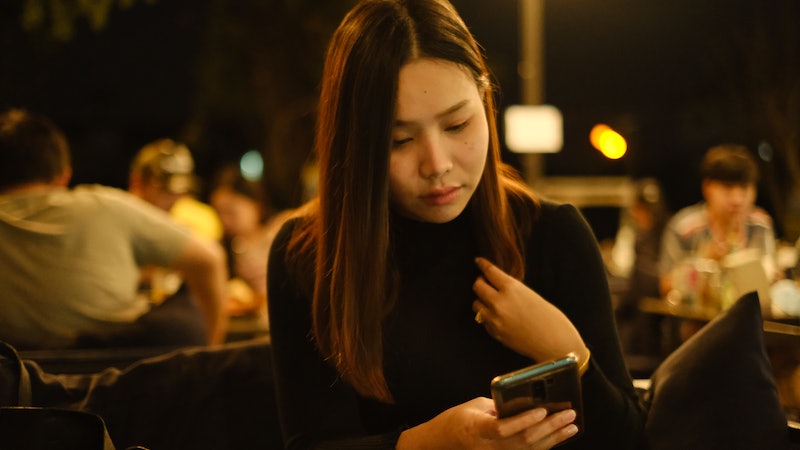 Some research suggests that Facebook can ruin your romantic relationships if you let it, so the easiest way to keep social media from affecting your relationship is probably just to avoid it altogether. If that's not an option for you, though, then you might want to at least consider modifying your social media habits — because taking social media too seriously can harm relationships. (In fact, that probably goes for taking anything too seriously.)

This doesn't mean you shouldn't participate in social media at all, because for some of us, that's just not realistic. This also doesn't mean you shouldn't make your relationship "Facebook official." (Mine is!) And if you want to post cute vacation pics of you and your SO, or share the occasional adorable status update about them, there's nothing wrong with that. In fact, as Women's Health reported back in 2013, sometimes bragging about your relationship on social media in moderation can leave you feeling better about your bond.

That said, it's important to know the difference between legit social media red flags and all the stupid, little things on social media that shouldn't affect your relationship. For example, if your partner hasn't gotten around to un-tagging themselves from all those photos of them and their ex yet, it doesn't necessarily mean they have unresolved feelings for them — it could just mean they're that lazy. (Though you should definitely talk to them about it if it bothers you.)

No two couples have the exact same feelings about social media, and that's fine — but here are five things on social media that shouldn't hurt your relationship. Period.

1. The Frequency & Cuteness Of Other Couple's Posts

Social media makes it really easy for us to compare our lives to the lives of others, and any time you start comparing yourself to someone else, it's probably going to mess with both your overall happiness and your confidence. As Margaret Rutherford, a clinical psychologist based in Fayetteville, Arkansas, told The Huffington Post: "Several clients have told me, ‘I’ve had to get off Facebook. It makes me crazy.’ They are struggling with the idealized view of others’ lives as portrayed in cheerful, perfect-looking posts on Facebook."

So even though it's certainly easier said than done, you shouldn't let that sickeningly sweet anniversary pic of your college roommate and her partner kissing affect how you feel about the state of your relationship, because your relationship shouldn't feel like a competition. As Rutherford said, "Even before social media, keeping up with the Joneses has never been healthy for couples. It’s an unobtainable and superficial goal." If it really bothers you, just hide all the PDA-loving couples from your newsfeed. It's super easy to do, and they'll have no way of knowing that you did it.

2. A Lack Of Likes, Shares, Or Retweets From Your Partner

Hey, I get it. It can genuinely hurt when you share something that you're really excited about, but the person you love doesn't even acknowledge it. When you post a gorgeous Instagram that you edited to perfection, or the funny video that makes you smile on your worst days, or the poem you finally got published, you want your favorite person to "like" it — and that makes sense. As Mic writer, Kate Hakala, reported back in 2015, "research has shown those small Instagram hearts and mini red flags give us something of a high by boosting oxytocin levels and reducing stress hormones, akin to falling in love. " Apparently, this is possibly even more true when it comes to the "likes" we get from the people we're "actually in love with," as Hakala put it.

All that said, it's important to keep in mind that social media is not real life, and if you're looking to "likes" for validation, then you might be struggling with low self-esteem, or just feeling insecure about your relationship in general. Just because your partner didn't "like" your pic, article, or joke doesn't mean they don't actually like it. They're your partner, so you already know they like you, your face, and almost everything else about you (or at least, they should). Maybe they missed your post, or maybe they just don't take social media as seriously as you do. Either way, it's not worth your relationship to get super upset about it. If your partner's lack of support on social media bugs you, though, remember that talking to them in person about how you feel is always OK.

3. Any Posts That Happened Before You Started Dating

First of all, if you're going far enough back into your partner's timeline that you've hit the posts that happened before the two of you started dating, that's probably not going to end well for you. As one Bustle writer put it back in 2014, "Some things are meant to be private. Seeing your current partner’s past, through social media, isn’t helpful. In fact, it can be hurtful."

Secondly, the past is just that — past. So even though it can be difficult sometimes, you shouldn't let any of your partner's posts from previous relationships get to you. Rather than allowing your partner's past to drive a wedge between the two of you, focus on the present, and remember that you also have a past. If you're still feeling wigged out after that, just talk to your partner about how you're feeling — because jealousy is damaging, and communication is essential.

As John M. Grohol, researcher, author and CEO and founder of PsychCentral told The Huffington Post, "you have to keep connected with your partner and limit your flirting -– especially with your exes — on messaging apps or social media sites like Facebook. Doing so will reduce unnecessary temptation.” So you should probably be careful and communicate with your partner about this one, but that doesn't mean being Facebook friends with exes has to affect your relationship. I mean, some couples may need to delete their exes completely, and that's OK, but it's not required — in fact, their ability to stay friends can be a good sign of their maturity. As long as you and your partner aren't behaving inappropriately with your respective exes, and you're both comfortable with the whole situation, then neither of you should stress out over it.

5. Old Pictures Of Exes Your Partner Has Yet To Remove

I totally understand that it's not fun to see pictures of your partner with their ex. Actually, it can really sting. That said, if your partner hasn't scrubbed all evidence of their previous relationships from their social media accounts yet, that's not necessarily a red flag. Right now, I have nearly four years worth of pictures of me and my ex that I still need to take down and all it means is this: I would rather play Pokemon GO and re-watch Gilmore Girls than hang out on Facebook sorting through dozens of old photos for hours.

Of course, I'm not suggesting you and your partner shouldn't go ahead and get all that un-tagging out of the way, either — because photos with exes won't do your relationship any favors. As Jennine Estes, a couples’ therapist from San Diego, told The Huffington Post, "For your partner to see you cuddling on the beach on a date? That’s going to sting for any human. ... Other people might have a tougher skin, but I say [err on the side] of caution. Do some preventative work. Better to be safe than sorry.” I guess I know what my next weekend project is going to be then...