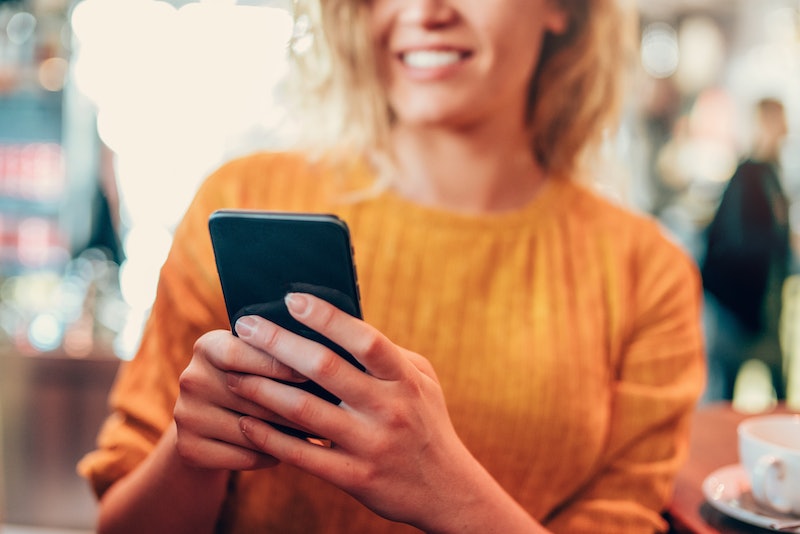 First of all, if you dig social media, then you won't be receiving any shame over it from me. Although I recently deleted the Facebook and Twitter apps, (not Instagram, though, because pretty), and I've started leaving my phone safely tucked away when I'm hanging out with friends (be in the moment, you know?), I still consider social media a necessity in my life. That said, I also know from personal experience that taking social media too seriously can be really bad for our overall wellbeing. In fact, not only is social media literally addictive, its use has been linked to depression, low self-esteem, problems with alcohol, decreased productivity, and a whole bunch of other negative stuff. So if your social media scrolling is leaving you feeling less-than, then you might be taking social media too seriously.

Of course, just as it's important not to take social media too seriously, it's equally important not to underestimate the role social media can play in your career and personal life. Hell, there are full-time, grown-up jobs that revolve solely around social media-branding for companies and prominent people. Additionally, social media can be a great way to build your personal brand, (especially if you're a creative-type, like myself), and there's really no easier way to keep in touch with friends and family. So, yes, social media can be a fun and productive tool, in moderation. Unfortunately, however, it's just too easy to get wrapped up in the merry-go-round of negativity that is Facebook, Twitter, Instagram, LinkedIn, Tumblr and whatever other social media platforms I'm forgetting.

Basically, what I mean to say is this: If you want to keep Facebooking and Tweeting, cool. Just don't take these social media things too seriously.

1. When Someone You Don’t Know Very Well Unfollows You

Hey, I get that being unfriended on Facebook or unfollowed on Instagram can sting. So if you've ever felt bummed about being unfriended, I'm not suggesting your feelings weren't valid. Hell, there have been studies conducted, and articles written, on the psychology of both unfriending someone and being unfriended — so I think it's safe to say no one likes social media rejection. That said, I can tell you from experience that, usually, when someone unfriends and/or unfollows you, it's more about them than you. As Slate put it back in 2014, "unfriending someone is rarely warranted unless you are trying to preserve your own mental health."

About a year after I graduated college, I found myself unfollowing several of my classmates, and it wasn't because I didn't like them. I actually liked them a lot, (still do) but seeing all their status updates about the fabulous jobs they were getting and trips they were taking was really difficult for me to deal with at the time. We'd gone to the same school, selected the same major, and graduated from the same honors program — but they were killing it in their professional lives while I was still stuck working retail jobs that did nothing to further my career. So hiding them from my timeline actually had nothing to do with them — it was all about my own self-esteem issues. Remember that the next time an ex-coworker or former classmate unfollows you.

2. When Your Partner Is Still Facebook Friends With An Ex

The first time I got an essay published I made the mistake of looking at the comments. The essay was about gender equality, so, of course, it inspired anti-feminist comments. Since that day, I've never intentionally looked at the comments on one of my stories — because people on the Internet are typically the worst, and if I took their criticism too seriously, my self-esteem would become so damaged that I'd probably never write another word.

The thing is, you really can't take negative comments too seriously, because people are especially mean on the Internet. Mostly this is just because the vastness of the Internet fosters a lack of personal accountability, but it also comes down to human psychology. People don't physically see how their words are affecting those they cyber-bully, so it makes it that much easier to troll the day away. Before the Internet, most human communication took place face to face. Because of this, we're still hardwired to take body language, tone, pitch, pace, gestures, and facial expressions into account when we're talking with, to, or about another person. On social media, all of these physical and emotional cues are removed, so it makes it easier for people to be mean without remorse.

Of course, I'm by no means suggesting that this excuses anyone's sh*tty Internet behavior, and safety and cyber-bullying should always be concerns. But I do think, in general, that it pays not to take the hate too seriously. So the next time someone's an a**hole to you online, (because, yes, there will be a next time) just block them and move on.

4. When Your Posts Don’t Get As Much Attention As You Thought They Would

I won't pretend I've never felt saddened when a pic I thought would get a ton of likes only a got a few. To be honest, I've been there more times than I'd like to admit. It's crucial not to take the absence of social media likes as personal rejection, though, because taking the popularity of your posts too seriously will hurt your self-esteem in a major way. Plus, ultimately, it just doesn't matter.

5. When Your Facebook Friends Forget To Wish You A Happy Birthday

Look, I know it's easy to feel disappointed when people forget your birthday on Facebook. Birthdays are a big deal for a lot of people, and everyone knows Facebook is down-right diligent about those upcoming birthday reminders. (I mean, could it be any easier for your college roommate to remember to wish you a happy birthday? No, no it couldn't.)

In my experience, though, no matter how easy Facebook makes it for me to remember birthdays, I never end up wishing everyone on my friends list a happy birthday. Yes, it takes two seconds and it would probably be the nice thing to do, but life gets busy, and sometimes you don't check Facebook.

6. When Someone You Know Posts Something That You Disagree With

I know it's easier said than done, but you can't take it to heart every time someone you love and respect posts something on social media that makes your brain angry. If everyone on my friends' list took my liberal, feminist, pro-choice, status updates on Facebook as a personal attack on their beliefs, then I wouldn't be Facebook friends with most of my family members. On the other hand, if I took all of my family's ultra-conservative posts seriously, I would have to delete them from my Facebook account. Fortunately, we agreed to disagree on all of that stuff a couple of years ago.

If you, too, can boast a politically diverse friends list, try to remember that everyone is entitled to their opinions — even when they don't make any sense to you. Equally important to keep in mind is the fact that, for some people, social media may be one of the few spaces they feel safe sharing their opinions. So, just like IRL, tolerance is key.