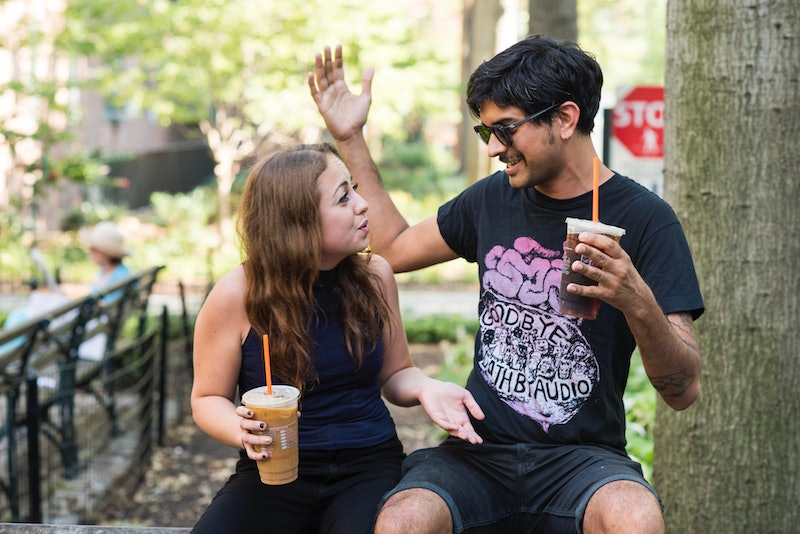 Being with an argumentative partner is like living with a dog that pees on the floor — super cute and lovable, but an ongoing and lingering issue that threatens to overshadow your whole relationship. This, of course, begs the question: Why are some partners so argumentative, and how can you work on this? If your partner is going at it all the time, lashing out and fighting back instead of just being the chill human you want them to be, what can you to do calm things down, take a step to the side, and retire the argumentative attitude once and for all?

I spoke with nine relationship experts on this topic, asking them what a gal should do who finds herself in this situation, and imploring them to elucidate, for the love of god, why some people are this way all the time. It seems as though, more often than not, people are this way because of old patterns or learned behaviors that go way back — and if you want to defuse the issue, speak softly and put down the stick. Keep these nine things in mind if you have an argumentative partner and you are searching for a rational and reasonable solution.

“People who are argumentative most likely are either very unhappy themselves and can't find other healthy ways to communicate this unhappiness, or have learned this behavior from their parents,” life coach Kali Rogers tells Bustle. "It's best to call out the behavior and have an honest discussion about it,” she says.

“If you are able to get on their level by asking questions and truly understanding where this combative nature comes from, together you two can work on building a different form of communication.” Though argumentativeness is annoying, it doesn’t have to be a relationship-ender, as long as you can work together. “Couples therapy is highly recommended for this kind of work,” Rogers says. Options are good in situations like these.

“Argumentativeness often stems from defensiveness, and defensiveness often stems from shame: shame about being wrong, shame about being not good enough, shame about not knowing,” licensed marriage and family therapist and certified sex therapist Natalie Finegood Goldberg tells Bustle. “The antidote to this kind of shame is reassurance. When you're partner's defensive hackles rise, it's often a sign that they are trying to protect themselves against the above forms of shame. When you see this happening, it's important to remind your partner that you love them and care about them and, if possible, that you're not attached to whatever it is they are arguing about.”

By practicing compassion and detachment, you can move on, instead of engaging in a fight. And you can be proactive: “It's also helpful to address it on the front end prior to discussing something that you know will be a potential argument, by saying something like, ‘I would love to be able to have a discussion about this, how can we talk calmly without it getting too heated or personal?’" By thinking ahead, you can skip over unpleasantness later.

3. They May Have Been Emotionally Abused

“Typically, people who have a history of being emotionally abused … lack the ability to communicate effectively,” author and relationship expert Alexis Nicole White tells Bustle. “It’s OK to agree to disagree. It is also equally OK to simply disagree altogether.” If you and your partner are butting heads, though, it’s time to get to the bottom of it. "[You can] disagree without being argumentative and combative, which is a skill that emotionally abused people tend to overlook as they don’t realize their behaviors as being problematic,” she says.

“Sometimes, you have to disengage from the conversation in order to really be effective in your getting your point across as to how their conversation tactics are effecting you,” White says. “The only way to really prevent this from happening is to bring it to their attention to see if they are willing to shift the dynamics of their conversation.” From there, hopefully things will begin to shift — or at least you’ll get an idea of where things are going. “This would indicate if they are willing to work on this and work through with you,” she says. If so, great. If not — move on.

Even if they have a really, really good reason to be argumentative (does that exist?), it doesn’t make it palatable. “There are a few ways to deal with argumentative partners,” she says. “For starters, don’t assume they realize what they’re doing. You might say, ‘You’re arguing with me,’ and test the waters.” Instead of fighting back, give them a chance to back off.

“If they’re surprised, then simply bringing arguments to light is a great way to begin to dissolve them,” she says. “You can also ask, ‘Why are you arguing with me?’” This takes the focus off the issue and onto the relationship dynamic. They may open up and tell you that they’re angry about something else, stressed from work, or something that brings the two of you closer to a healthy relationship dynamic.”

5. They Learned It In The Past

“Many times, they are simply repeating what they have been taught, and what they observed in their home of origin,” psychologist Nicole Martinez, who is the author of eight books, including The Reality of Relationships, tells Bustle. “Also, they may have only had partners who were either argumentative as well, or did not try to work on this behavior and them having healthier interactions.” It’s not going to fly in your relationship, though.

“You can work on this by letting your partner speak their whole side and point of view before you cut in,” she says. “You may not agree, but they will feel heard, and that you tried to understand them. Become a master of compromise. What is a halfway point in this situation that each of you can live with? This way, each person feels like they are walking away with something, and were understood.”

It’s also wise to point out the problem — not vilify the person. “Attack the issue and not each other,” Martinez reminds. “Do not resort to personal attacks, name calling or screaming.” From there, everything will go a little more smoothly.

6. They’ve Forgotten To Be Curious

“They are forgetting about that curious posture they once held … when the relationship was new and fun,” marriage counselor Jessica Wade tells Bustle. “Instead of assuming the best, [they] could be accusing and blaming.” No good.

Don’t get defensive, though: “Holding a defensive posture perpetuates conflict,” she says. “To end the cycle, someone simply needs to step up and model that open and curious posture again. It will change the tone of the conversation. Blaming is no longer necessary when the blamed partner’s defensiveness turns instead to curiosity about how to fix whatever problem is at hand.” So instead of getting upset every time your partner is argumentative, try sitting down and having an open conversation about it.

7. They Grew Up In A Critical Household

“Some things just come back to how you were raised,” Stefanie Safran, Chicago's "Introductionista" and founder of Stef and the City, tells Bustle. “Perhaps they grew up in a critical household, perhaps their last partners were very argumentative. Sometimes it's all in the approach to actually talk things out before they become heated,” she says. If you can, have that talk about what’s what way before tension breaks out.

“If you go to your partner with a request about what you need, rather from them than what they lack, you might get a better response or reaction,” she says. “As I tell clients, it's about learning to date on the offense, not the defense.” Your partner doesn’t have to duck for cover, and you can figure things out together.

“When couples are anxious, and perhaps grew up in families where arguing and blaming was the norm, they tend to be reactive to each other, getting defensive about every little thing,” Tina B. Tessina, aka Dr. Romance, psychotherapist and author of How to Be Happy Partners: Working it out Together, tells Bustle. “Instead of complaining, criticizing or resenting each other, try asking each other what you’re thinking about the situation.” If you just get mad, you’ll get nowhere. Try saying something like, "I think it would work better to do this — what do you think?” she says.

“If you listen to each other, and focus on sharing what you know, you’ll grow in understanding and teamwork,” Tessina says. “The best way to end the ‘who is supposed to do what’ argument is to do it — or at least work it out — together and make it fun.” Get the dishes done together, and you’ll get them done in half the time. Sit around fighting about it, and — well, you know the rest. “

A smart partner will make this as easy as possible — make it fun, affectionate, and focus on becoming a team,” she says. “Rather than figure out who’s right, couples need to focus on what works, and find ways to motivate each other to work together.” Amen.

9. Who Cares? Find A Solution

Plain and simple, go straight to the source and try to help a partner who is argumentative, Darren Pierre, educator, speaker and author of The Invitation to Love: Recognizing the Gift Despite Pain, Fear, and Resistance , tells Bustle. “When the time is right — that is, when your significant other is open to the conversation — share that their tone in heated conversations is not moving what they intended to move forward,” he says. “Often, when I know that what I am saying or doing is not yielding the results I want, I am more apt to change.”

Instead of jumping all over your partner, tell them things aren’t working, and why. Articulate to them that they have to change their tone to be heard. “If your partner is expecting you to listen, to hear them, and validate their concerns, that expectation is muted when tone and delivery are off-putting,” he says. “Want your expectations to meet your partner? Make sure your tone in request or frustrations meets the needs of your partner.” From there, everything is possible.