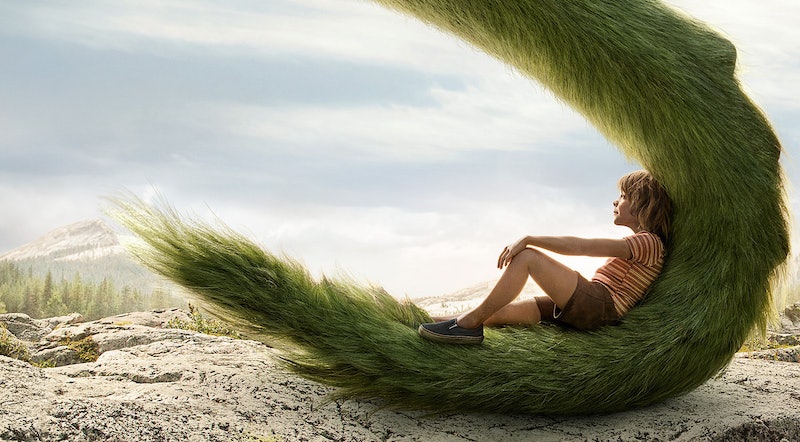 Disney is really reaching into their back catalog for IPs that are worth remaking for a modern audience, and the latest is a surprising selection. While previous remakes from the Mouse House have focused on well-known animated films like Alice in Wonderland, Cinderella, and The Jungle Book; the latest draws from a long-forgotten and little-known film: 1977's Pete's Dragon. But how does the new Pete's Dragon compare to the original?

The short answer is that it barely does at all. Other than the fact that both films center around a young orphan named Pete and his dragon friend Elliot, who can turn invisible, they're two completely different movies. This really isn't too surprising of a direction for Disney to go when you think about it, though. The original, while it has its fans, is hardly considered to be a venerated classic. The film only has a 48 percent rating on Rotten Tomatoes, so even though some fans will no doubt be unhappy about its reputation being besmirched, the bulk of the population should be just fine with Pete's Dragon getting an update. So with that disclaimer out of the way, here are all the major ways the new Pete's Dragon differs from the original.

This is probably the most obvious change. The old dragon was traditionally animated, while the new is CGI. Also, the new Elliot is furry, while the '70s version had skin like a classic reptilian dragon — save for a tuft of pink hair on his head.

It's Not A Musical

The original film was full of singing, with one song — "Candle on the Water" — even receiving an Oscar nomination. The new movie ditches the songs for more of an adventure feel.

In addition to Pete and Elliot, the movie centers around a forest ranger named Grace who discovers Pete in the woods. Her father, Mr. Meacham, is known for telling tall tales about a dragon in the same woods. Grace is romantically involved with Jack, who owns the local lumber mill. Eventually, Jack's young daughter Natalie befriends Pete as she, Grace, and Mr. Meacham uncover the truth about Elliot. This puts them into conflict with Jack's brother, Gavin, who wants to hunt the dragon. Not a single one of these characters appears in the original film.

The first Pete's Dragon had a sad story at its core. Pete was an orphan who was adopted by a hillbilly family, the Gogans, who abuse him (there's even a song about the abuse). He runs away, and that's when he finds Elliot, moves to the coastal town of Passamaquoddy, and fends off a medicine man named Dr. Terminus who wants to exploit Elliot. The new movie removes the abusive backstory and the crooked conman completely, instead villainizing Gavin and the lumber mill's ambitions in the forest, and depicting Pete as someone who's lived in the woods with Elliot for six years.

The first film takes place in the early 20th Century, largely in Passamaquoddy. The new movie has a more modern, though still retro, setting of 1982, and the action moves to the Pacific Northwest.

There's definitely a lot more that's different than familiar in the new Pete's Dragon, and if it weren't for the title, I'd hesitate to even call this largely original movie a remake at all.