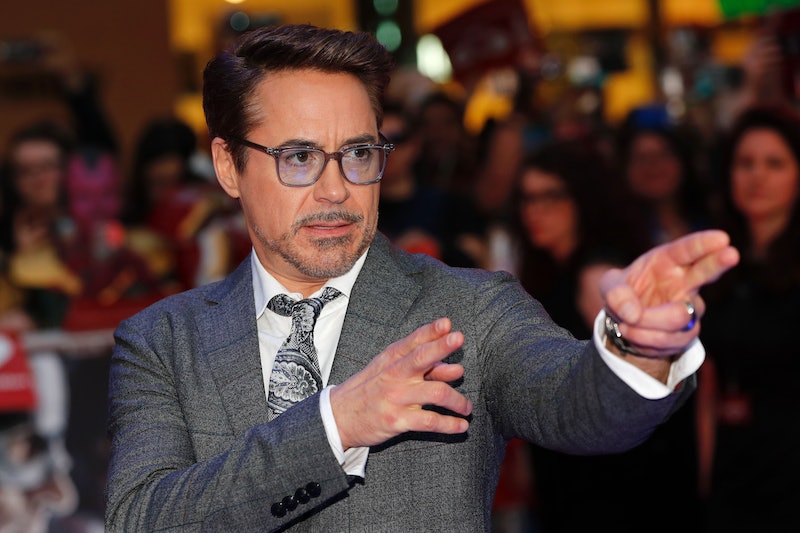 Do you remember that one time we gathered around the computer and stared at those photos of Tom Hiddleston celebrating the Fourth of July in an “I <3 T.S.” tank top? And do you remember when we were all like, “Wow, Hiddles and Taylor Swift's relationship has already reached the put-your-significant-other's-initials-on-a-tank-top level? What a thrill!" And do you remember when we all wondered whether or not anyone made a matching shirt for the rock pile? (Come on, don’t tell me I was the only one! If there’s anyone who deserves a free T-shirt, it’s that now-infamous third wheel.) Well, I hope you and your world are chill with being turned upside down. To commemorate the day Tom Hiddleston created an Instagram account, Robert Downey Jr. posted an “I <3 T.S.” tee pic and paired it with the following caption:

Join me in welcoming the biggest T. Stark fan of them all to Instagram!

Wow. Wow wow wow wow. And to think we were so sure "I <3 T.S." meant "I love Taylor Swift." We were so certain. We were so confident. But one month later, Hiddles's Avengers costar swooped in and set every last one of us straight: Loki was just showing Tony Stark some love. Loki and Iron Man: true friends 'til the end.