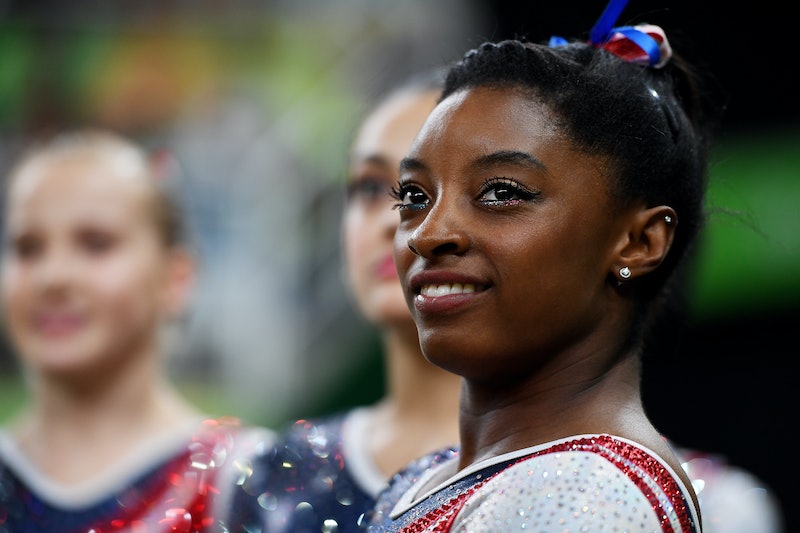 Superhuman, champion, all-star. These are just some of the phrases used to describe Simone Biles, who's officially now an Olympics gold medalist, along with the rest of the U.S. gymnastics crew. While she's on a whole different level as far as athleticism, a recent interview with NBC revealed she's more relatable than you may have thought. During a tour of her bedroom, Biles revealed she has a life-size Zac Efron cutout. Making this news even better, she confessed, "Sometimes I used to kiss him on the cheek."

In the clip below, the reporter asks the 19-year-old, "You realize that's a little strange, right?" In response, Biles smiles and nods. But is it really that strange, though? Who didn't plaster their wall with posters of their celeb crushes growing up? Having a life-size cardboard version is just an extension of that. If anything, it's even cooler. Plus, perhaps it's a good luck charm, considering she's so successful athletically.

Part of me hopes that this NBC clip will go viral and Efron will see it. That way the High School Musical alum would know and could actually meet the gymnast. Could you imagine what a dream come true that'd be for Biles, since she's had a cutout of him in her room for years? It'd be the perfect full-circle moment. Plus, unlike the cardboard, he could actually speak to her.

In the screenshot above, you can see the admiration in her eyes as she gazes at the cutout. (Because duh, it's Zac Efron.) It's also amusing to see the major height difference between the 4-foot-9 athlete and the actor.

Skip ahead to the 1:54 mark to see the moment for yourself in the video below. Or you could watch the full thing, because it's only three minutes and her life story is rather inspiring.

Honestly, I think Efron would be flattered to hear about Biles' crush, especially since the actor tweeted a picture standing in front of a poster of the Final Five. He's holding his hands in a heart shape and said "of course" he's watching the team during the Olympics.

Is it just me or does it sound like the fandom is mutual? Somebody make an Efron-Biles meet-up happen ASAP.