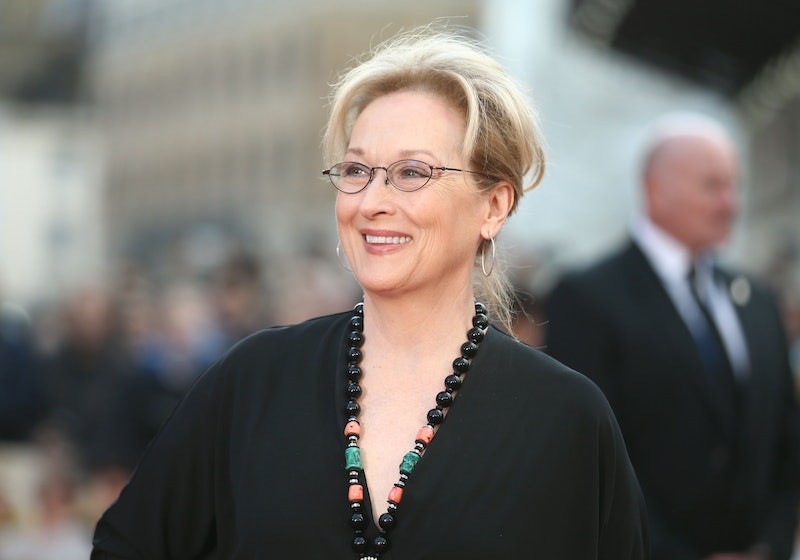 The same way it tends to be most convincing when a really nice person plays someone super mean (Rachel McAdams in Mean Girls, anyone?), it takes a highly skilled actor to convincingly play a character who's terrible at, well, everything. Such is the case for Meryl Streep in Florence Foster Jenkins , a new movie that finds the multi-talented star playing a real-life woman known for having a love of music but an absolutely terrible voice. Streep, of course, is a strong singer herself, having shown off her musical chops in movies like Mamma Mia! and Into the Woods, although performing is just one of her many skills; the actor is also known for abilities like a mastery of accents, screenwriting, and violin playing. But it turns out that, like Jenkins, Streep does have something she's truly bad at doing (besides identifying as a feminist, rather than a humanist, that is).

"I don’t like golf. I mean I really don’t. I tend to like things that I can do right away, and if I can’t do it right away, I don’t like it," Streep told reporters at the New York press conference for Florence on Tuesday. "So skiing I really like, because you can get up on skis if you’re coordinated and completely reckless. You can lean forward and go, but golf, no. Nobody can do that."

Tiger Woods might disagree, but alas, it appears that golf is just not for Streep. The star went on to explain that when she tried to play, she "never hit the ball, ever. And my husband kept saying, 'you’re coming up on the ball.' I’m not coming up! I would hunk (sic) down and just woosh right over the top of it."

If it's hard to imagine Streep being bad at golf (or anything, for that matter), you're not alone — her Florence co-star, Hugh Grant, is on the same page. After Streep's admission, Grant joked, "I’d love to see you be bad at golf, just be bad at something. It’d be very comforting."

Hear, hear. Yet Streep's apparent lack of skill isn't even really a detriment, as it likely helped her get in touch with Jenkins while filming Florence. The character, an upper-class New Yorker who pursues her dream of performing at Carnegie Hall despite having an awful voice, famously said, "People may say I can't sing, but no one can ever say I didn't sing," and with that kind of energy and determination, her lack of ability hardly mattered. Jenkins' attitude is truly inspirational, and at the conference, Streep said that she, too, has learned from her character's perseverance.

"I think that that kind of spirit can live in anybody. You can’t buy out Carnegie Hall, but you can certainly sing in the kitchen and not give a damn whether anybody doesn’t want you to," she said, adding with a laugh, "That’s a lesson from my own life."

Streep added that Jenkins' spirit is especially incredible considering the environment the character lived in, an era — New York in the '30s and '40s — in which women's roles were limited and their agency was often questioned. "Speaking to that time, for women of privilege and education, there were not many opportunities and places to put it," said Streep. "So they found their ranking and their importance in society, where they were in the hierarchy of importance, in these clubs ... that was the realm of women. And they were slightly ridiculous, because they didn’t matter. They didn’t move anything in society. They weren’t in the government, they weren’t in law, they weren’t in business, except for a few outliers."

"So this was where you would shine, and [Jenkins] had a big dream," Streep continued. "She was silly and she wore ridiculous clothes, but she was happy and she enjoyed her life."

Jenkins' circumstances may have been specific to her time, but her attitude about both singing and life in general is something, as Streep made clear, we can all learn from.