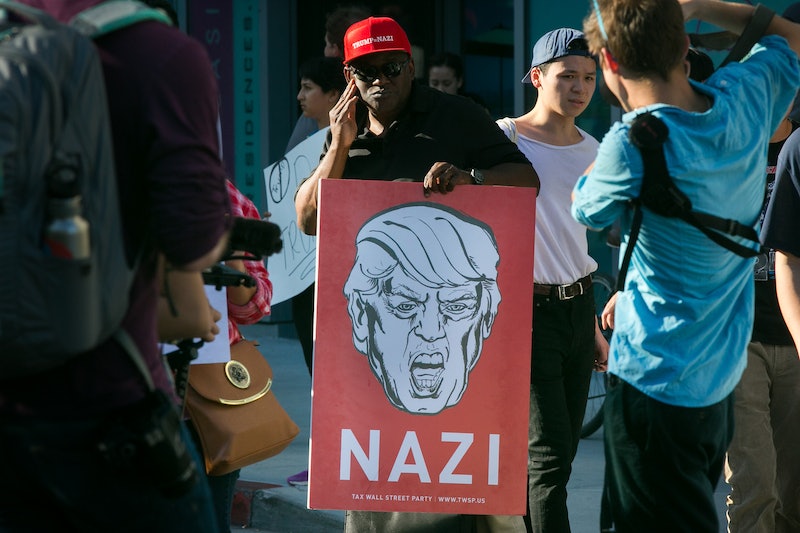 There are only 90 days left until the presidential election, and Donald Trump is desperately trying to make up for lost support in the polls. However, a new endorsement might have just seriously set him back. It turns out, somewhat unsurprisingly, that the head of the American Nazi Party is a Trump fan. Rocky Suhayda, the party's leader since the early 2000s, suggested that if Trump is elected president, white supremacists would be able to start building a pro-white caucus in Congress.

“Now, if Trump does win, okay, it’s going to be a real opportunity for people like white nationalists, acting intelligently to build upon that, and to go and start — you know how you have the black political caucus and whatnot in Congress, and, everything, to start building on something like that, okay,” Suhayda said during his radio program's most recent broadcast.

“It doesn’t have to be anti, like the movement’s been for decades, so much as it has to be pro-white. It’s kinda hard to go and call us bigots if we don’t go around and act like a bigot. That’s what the movement should contemplate.”

This isn't the first time that Suhayda has made statements about Trump. The ANP leader has written in past reports that he would avoid making statements about Trump in order to keep any negative association away from the campaign, BuzzFeed reported. He also stated that Trump was an exemplification of the party's views, and a sign that they were more popular with the American people than many like to believe.

“We have a wonderful OPPORTUNITY here folks, that may never come again, at the RIGHT time,” Suhayda wrote. “Donald Trump’s campaign statements, if nothing else, have SHOWN that ‘our views’ are NOT so ‘unpopular’ as the Political Correctness crowd have told everyone they are!”

Suhayda hasn't been 100 percent on board with all of Trump's policies, however. He criticized Trump's Muslim ban back in December, calling it unrealistic but appreciated. "Unless Trump plans on ruling by Presidential Decree, I don’t see how he would implement ANY of his ‘plans,’ the rest of the sold out ‘mainstream’ political whores would block his every move,” Suhayda wrote in an email to BuzzFeed. “I seriously doubt if he even believes all what he says, but its nice to have someone like him saying it.”

Trump hasn't responded to these latest comments yet, but he's already been through a similar situation earlier in this campaign. Trump received a ton of criticism for his failure to disown former KKK grand wizard David Duke's endorsement in a timely manner, as it appeared to the public that he didn't mind the endorsement from a prominent white supremacist leader. Although Trump eventually publicly disavowed Duke's endorsement, it left a stain on the campaign that Trump will likely be quick not to repeat this time.