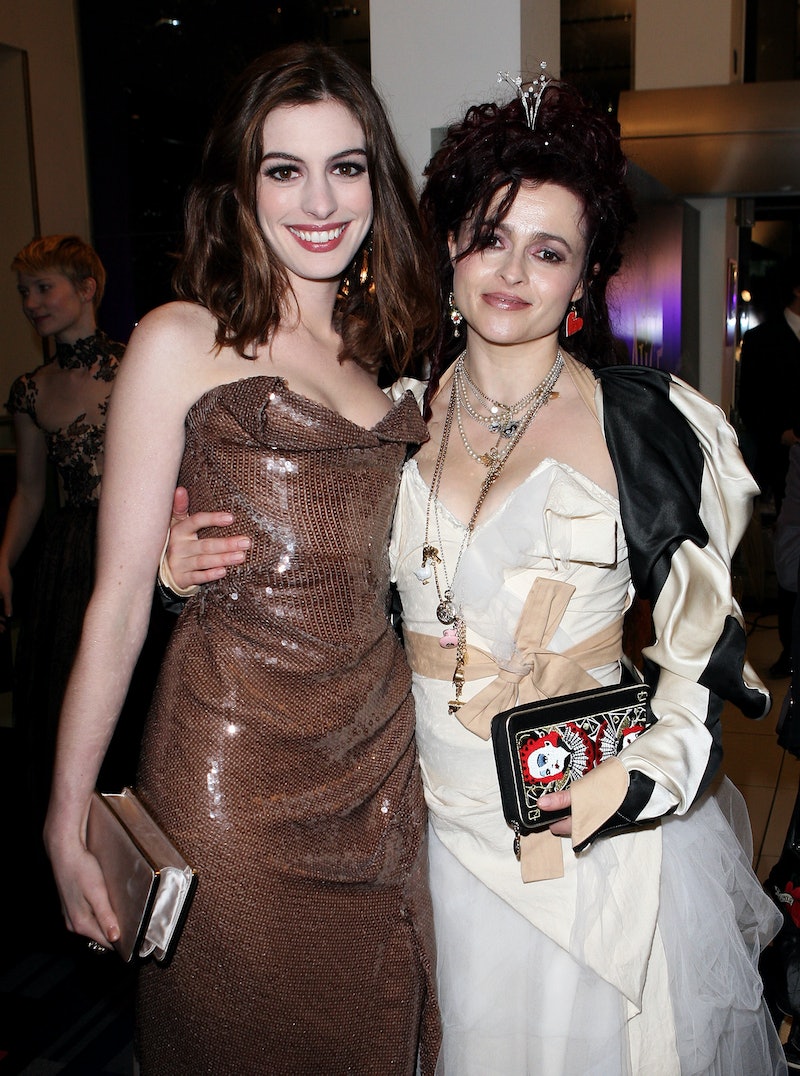 Hey, remember that time the all-female cast of Ghostbusters was announced and it caused the bro-pocalypse? Yeah, me too. Thankfully (for my sanity), though, when it comes to casting women rather than men in popular film remakes and spin-offs, the tide seems to have turned altogether. Case in point, the female cast for Oceans 8 was announced, and the Internet, specifically Twitter, seems to be pretty damn jazzed about it. And I mean, why wouldn't they be? According to Deadline, "deals are close with Anne Hathaway, Rihanna, Helena Bonham Carter, Mindy Kaling, and Awkwafina," in addition to the already closed deals with Cate Blanchett and Sandra Bullock.

If you weren't previously privy to the Ocean's 8 news, per Deadline, the film is the Oceans Eleven "female-driven caper spinoff directed by Gary Ross." Which, I'm sure makes this casting reveal all the more satisfying to you — and if so, you aren't alone in that. After cautiously searching around the dark place that Twitter can be, I was pleasantly surprised to find that most people on the outspoken social media platform are gung-ho about the remake and the casting. It's a breath of fresh air.

Here are a variety of tweets that show the Ghostbusters remake controversy is mostly a thing of the past:

People Are Ready And Willing To Give The Film A Chance

But, Some Are Pumped For One Person In Particular

Others Are Feeling Quite Optimistic

Honestly, sequels can really go either way, but it's just nice to see that people aren't counting it out before they even see it.

In Fact, Some Are Totally Over The Moon About It

Not literally, though. That'd be difficult to execute.

And, Are Super Proud That It's Happening

Congratulations, it's a sequel!

While Others Are Being So Supportive

Some Tweeters Are Making Jokes At The Expense Of The "Bros"

Others Are Ready For The Backlash And Don't Care

Aka, the Ghostbusters brand of haters.

A Significant Amount Of Jokesters Have Also Targeted The Wage Gap

Does someone need ice for that burn?

I Told You, I Wasn't Kidding

The wage gap is important to note.

It's a major issue, it's hard not to point it out.

And, I'm Here For All Of It

Some Were Even Perturbed By The "11" Being Reduced To "8"

Meaning, That Rather Than The Female Ghostbusters Fury...

...The Ocean's Eight Fury Is Centered On Their Not Being Enough Females

Now, that is a welcome change of pace (of course, it could just mean it takes less women to get the same job done as it does men... in which case, *thumbs up*).

Sure, there were naysayers woven throughout tweets of excitement and praise, but it's important to note that this time, the positive feedback totally outweighed the bad. In the words of Mean Girls' Janis Ian, "Suck on that."

More like this
Amanda Gorman Shared A Powerful Message On Meghan Markle’s Penultimate Podcast
By Darshita Goyal
How To Stream 'White Noise' On Netflix
By Grace Wehniainen
You Definitely Know The Voice Of Shuri's AI In 'Black Panther: Wakanda Forever'
By Brad Witter
Keke Palmer Finally Showed Angela Bassett Her Famous Impression Of Her
By Stephanie Topacio Long
Get Even More From Bustle — Sign Up For The Newsletter