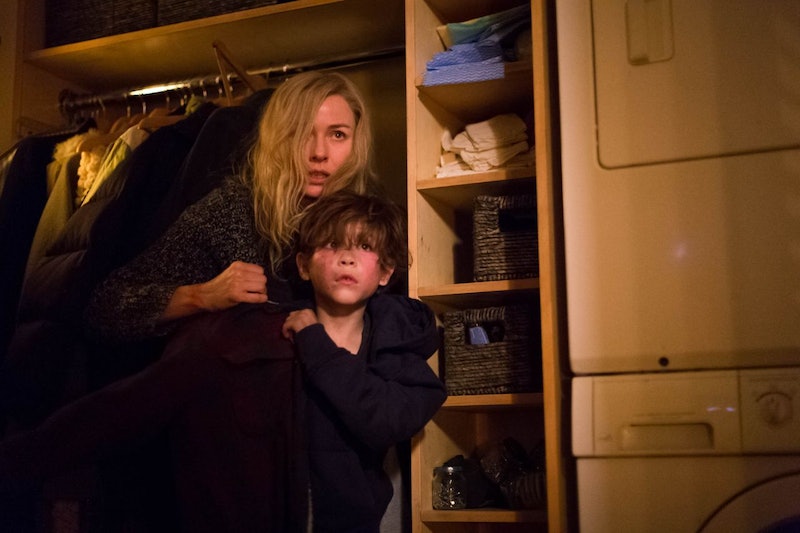 In seven and a half months, 2016 has already brought us a decent amount of scary movies. Blake Lively fought off a terrifying shark in The Shallows, The Purge: Election Year saw murderous anarchists roaming the streets, and The Conjuring 2 featured the classic "kid possessed by an evil spirit" scare. But, with the end of summer near and Halloween on the horizon, movie theaters are about to get a lot more spooky. If you're a horror movie junkie, or just enjoy a good jump scare every now and again, you're going to want to be prepared for the 19 scary movies still to come in 2016.

It's about to be a really good time to be a scary movie lover. Not only are new, ambitious horror thrillers hitting the screen, like The Girl with All the Gifts and Morgan, but the end of 2016 will also see the comeback of two beloved horror franchises, The Blair Witch Project and The Ring. But, that's not all 2016 has to offer fans of gore, blood, death, and scares that will give you nightmares. The year will also bring some horror comedies, some psychological thrillers and a few action mysteries sure to send shivers up your spine. But before you go to the movies, just remember, there's no shame in sleeping with the light on after you've seen these 19 scary movies hitting theaters before 2017.

Jane Levy, Stephen Lang, and Dylan Minnette star in this horror movie about a group of young adults who decide to rob a blind man. Needless to say, the tables turn against them pretty quickly.

Morgan presents a sort of dystopian future where scientists have created a superhuman, and that superhuman wants to kill everyone.

Get ready to see Room cutie and red carpet charmer, Jacob Tremblay, in a whole new light. In Before I Wake, Tremblay plays an adorable little boy whose dreams come to life when he sleeps, whether he wants them to or not.

When the Bough Breaks is a twisted thriller about a young woman who embeds herself into a married couple's life when she becomes their surrogate. Think Fatal Attraction, but with more pregnancy troubles.

Filmmakers managed to keep Blair Witch, the new follow up to the 1999 classic The Blair Witch Project, a secret until revealing the first trailer at Comic Con this summer. The movie finds a new generation, led by James, enter the woods of the Blair Witch in the search for James' sister.

Goat isn't a traditional horror movie. The film, which stars Nick Jonas and James Franco, is about young men pledging a fraternity, and the sick things they are made to do for initiation, including brutal hazing. Sometimes the violence every day kids inflict on each other is more scary than the violence in a fantastic horror film.

Need a movie to scare you off Facebook? Friend Request will do the trick.

Ok, so this one's more of a weird, WTF kind of horror movie. Either you'll think it's a hilarious take on horror, or you'll find the humor so unfunny it's scary.

From director Jonás Cuarón (son of Oscar winner Alfonso Cuarón), Desierto is a cat and mouse thriller about a group of people trying to cross the Mexican border illegally, only to find themselves as prey for a white vigilante once they reach American soil.

I know what you're thinking, Ouija did well enough to inspire a sequel? Apparently, the answer is yes. Ouija: Origin of Evil takes place in the '60s, when the Ouija board came into the lives of a single mother and her two daughters, only to cause a dark spirit to take over the youngest child.

Yes, this Tyler Perry movie will most definitely be more comedy than horror, but, hey, scares, even if they're for laughs, are still scary.

When The Ring was released in 2002, it was a huge phenomenon and even inspired a sequel in 2005. Now, 11 years later, the scary series is back with Rings, and the tape that caused the horror all those years ago is back too.

Tremblay stars in another horror movie, this one about a little boy who is under the care of a chid psychologist (Naomi Watts) during a vicious winter storm that threatens their lives. (Based on the photos released, I'm guessing there's something far more supernatural threatening their lives as well.)

Did you really think a movie titled Bye Bye Man could be anything but horrifying?

Another horror movie about a woman and a young boy (this time, it's her son) who find terrifying things in the attic of their home. This time with Kate Beckinsale and without Tremblay.

Bella Thorne and Chandler Riggs star in this thriller about a family forced to play a dangerous game when their home is invaded by sadistic killers.

Not much is known about Kidnap, a thriller in which Halle Berry plays a mother desperate to find her kidnapped son. IMDB has the film listed for a Dec. 2 release, but based on the serious lack of information on the film, I wouldn't be surprised if it was pushed back.

Other horror movies are rumored to be coming out before the end of the year, including Leatherface, a prequel to the Texas Chainsaw Massacre series starring Lily Taylor and Stephen Dorff, Solace, a murder mystery starring Anthony Hopkins and Colin Farrell, and The Girl With All The Gifts, a science fiction movie based on the novel by Mike Carey. (Both Solace and The Girl With All The Gifts are scheduled for release in the UK, but not yet in the US.)

If these aren't enough to satisfy you scream queens out there, then I don't know what is.