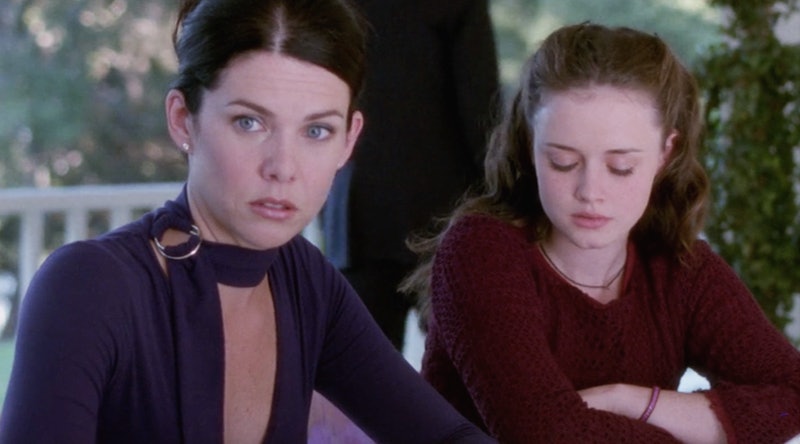 There’s been such thick excitement about the Gilmore Girls Netflix reboot — not only because the rapidfire dialogues and coffee-worship, but because of the beautiful girl power undercurrent of the hit TV show. Yes, many can claim Gilmore Girls as one of the first nudges towards their feminist awakening, and it’s understandable. From the beginning you could see those leanings: feminism in Gilmore Girls can be seen as early as Season one, 1 when Rory and Lorelai were just two blue-eyed babes filled with ambitions.

Yes, the first season showed Lorelai as a self-made woman who wanted nothing more than to own an inn of her own and foster her daughter’s education. Rory was an over-achiever with a love of books that rivaled Lisa Simpsons. They were best friends, unbreakably close, and they were passing the Bechdel test with flying colors. Of course, not everything was perfect; the word “slut” comes up in the first few episodes a bit more than I’d ever like to see. Likewise, a lot of these claims are certainly up to debate and interpretation... is it feminist to be a good daughter, a good mother? Not necessarily.

But Gilmore Girls wins feminism points for showcasing those relevant bonds, and giving us complex, nuanced female characters. So peer deep with me, as we catalogue some of the moments that showcased lots of female love, sisterhood, and support in Gilmore Girls Season 1.

She jokes about offering to sleep with the principal to get Rory in, but you have no doubts that Lorelai has fought hard to give Rory an academic advantage.

She's almost more excited than Lorelai is, and plans to make celebratory cookies on the immediate.

3. Sookie's Refusal To Be Silenced About Lorelai's Final Option About Asking To Borrow Money From Her Parents

Lorelai is an expert at running away from her problems, so it's plausible she would dodge Richard and Emily indefinitely if she could. However, Sookie forges through with the difficult conversation and urges Lorelai to consider it, for the sake of Rory's education.

In context, this may have something to do with her pride and a resistance to be tied back to her parents. She's certainly shielding Rory from thinking she isn't hardworking... which is silly, because Lorelai is someone who climbed up the career ladder without the help of her privilege. She is nothing but hardworking.

5. The Adorable Story Behind Rory's Name

She named me after herself. She was lying in the hospital thinking about how men name boys after themselves all the time, you know, so why couldn't women? She says her feminism just kind of took over. Though personally I think a lot of Demerol also went into that decision.

Don't get me wrong. Guys are great. I am a huge fan of guys. You don't get knocked up at 16 being indifferent to guys. But, babe, guys are always going to be there. This school isn't. It's more important. It has to be more important.

She flies into a light rage fit proceeding this, but it's so important that she gets to essentially say, "There's nothing wrong with dudes, but you need to make your life, ambitions, and education a priority first." It's something Rory works to balance as she grows throughout the series, and she usually (eventually) falls towards the latter.

7. Also, The Depth Of Rory's Ambitions Showcased In Her Speech About Wanting To Be Like Christiane Amnapour

She's less concerned with being a talking head on The View or being famous. Rather, she wants to report on things that a real and important. I wanted to be Courtney Love when I was 15. Still feminist, but like... in a different way.

8. When Rory Thanks Lorelai For Not Forcing Her Into Anything As A Child

Lorelai sees a little girl being stuffed into some frothy frock and reminisces on how she hated being stuck wearing dresses like that. All at once, it dawns on Rory why her mother feels such a need to rebel: being raised in the high-class world of Richard and Emily, she was forced to conform to their high standards. Rory then remarks, "Thank you for not putting me in a dress like that." The subtext... is heavy.

9. Sookie's Perfectionism, But Particularly In The Magic Risotto Saga

It may seem a little crazed, but there's no doubt that Sookie takes her career 1000 percent seriously. Like, seriously enough to track down a famed food critic with a plate of food and the right glass of wine.

11. Lane's Continued Rebellion Against Her Mother's Strict Rules, Encapsulated In This Scene Where She's Dancing To Rancid

Eventually she manifests more confidence and is able to be open with her mother about living a sort of rock n' roll lifestyle. For now, though, we have to appreciate the little, behind-closed-doors moments.

12. Our True Introduction To Miss Patty, All Around

She gives zero f*cks about eating food in the middle of the aisle and offers Rory a plum because they're "better than sex" (such a sex positive character). Miss Patty is the literal best.

"Well I’m attracted to pie, but it doesn’t mean I feel the need to date pie." She tries, she really does try.

14. And The Explanation For Refusing To Date, Which Is For Rory's Sake

She doesn't like how dating Rory's teacher would reflect on her daughter, but she's also afraid of breaking up with someone and having Rory get attached and hurt.

15. Also The Passive-Aggressive Conversation About Dating-Or-Not-Dating Max Is Worth Noting

"You can go out with whoever you want." "It’s whoever we want." Rory's definitely not cool about the situation at this point in the game, and she's down to shut down the subject entirely. Still, it's good to note that, when the truth comes out, Lorelai does offer to not date Max out of respect for her daughter.

It's a big effort on Lorelai's part.

17. Lorelai's Hurt About Rory Not Confiding Her About Being Kissed

"I have to make her understand that I'm OK with the guy thing," she tells Luke. "'Cause not talking about guys and our personal lives... that's me and my mom. That is not me and Rory." Aww.

18. When Lane Calls Out Rory On Being A Neglectful Unsupportive Friend, Because... Yeah

And then, TBH, Rory continues to be half-distracted about her friend's problems throughout the rest of the series. But at least Lane calls her out on it here, and knows that supporting your female friends means calling them out when they're in the wrong, too.

19. Lorelai's Apprehension About Bringing A Guy Home And Ruining The Gilmore Sanctity

Again, a lot of this ties back to Rory and respecting their shared space. It is a big deal.

20. When Lorelai Listens Objectively To Lane's Problems And Then Allows Her To Crash At The Gilmore Household

"Yeah, everybody screws up Lane. That's what happens. It's what you do with the screw-ups, it's how you handle the experience, that's what you should judge yourself by." That's, like, really good advice to give someone. And very generous considering Lane just totally c*ckblocked her.

21. This Whole Dialogue Between The Gilmore Ladies About Whether Dean Should Get Rory At The Door Or Not

I think it's sweet that Emily insists upon it as it's a sign of respect, and I also think it's important that Rory and Lorelai argue that, "No, really, it's cool."

22. When Lane Gives Up On Todd Because He's A Total Idiot, OMG

23. When Lorelai Encourages Rory To Forge Female Friendships With Chilton Girls By Giving Them Bangles Tickets

Paris is the only one who comes out of this situation unscathed.

24. Rory And Paris's Heart-To-Heart About Tristan

"I think maybe you could do better," Rory says. Understatement of the century.

25. The Way Lorelai And Rory Satirize The Gender Stereotypes In The Donna Reed Show

26. Likewise, The Way Rory Investigates Donna Reed As A Person And Notes That She Was Actually A Respectable Woman

"She was an uncredited producer and director on her TV show, which made her one of the first woman TV executives." It is, as Rory says, "kind of impressive." But only kind of.

27. The Way Lorelai Defends Herself Against Christopher's Awful Father

Dude, Lorelai was a single teen mom who moved up the ranks of hospitality like a boss; she's the last person you should blame for your son's failure. Like, that's on him.

28. Also The Way Richard Defends Lorelai, Noting That A "Mutual Mistake" Was Made 16 Years Ago And Lorelai Is A Very Successful Young Woman

It's complicated and maybe more of a familial thing, but I'm glad it happens none-the-less.

This is the closest Emily ever gets to warm and fuzzy and it's beautiful.

30. How Rory Refuses To Be Coerced Into Saying "I Love You"

Just because her boyfriend built her a car doesn't mean she owes him anything.

31. The Way Rory Tries To Power Through Her Break-Up With Productivity

This is more of a coping mechanism, but so it goes.

32. How Lane Just Falls In Line When Rory Shows Up Hysterical And Says They Need To Go

Even if that means breaking conversation with a cute boy. Ovaries before brovaries.

Not that she doesn't throw shade at that whole teen-pregnancy thing, but Trix values self-sufficiency over scandal. "Hard work is good for a woman... makes her stronger," she says.

34. And, Finally, When Lane Shows Up With Apology Coffee To Rory

She was just trying to look out for Rory's best interest by keeping her study session with Dean a secret, and look. Coffee. Rory loves coffee. Such a good friend, and women being friends with other women is still shockingly underappreciated in mass media.

Even in its early days, and despite a few hiccups, Gilmore Girls was empowering us to be our best selves by showing us examples of women — and relationships between those women — that we could admire on their best days and their worst days. As if we needed more reasons to love this show.

More like this
24 History-Making Black Women You Probably Didn't Learn About In School
By Ayana Lage and JR Thorpe
25 Inspiring Quotes From Black Women To Celebrate Black History Month
By Kyli Rodriguez-Cayro and JR Thorpe
The Banned 'Friends' Ad Shows Monica As You’ve Never Seen Her Before
By Sam Ramsden
Ashton Kutcher Wants Danny Masterson “To Be Found Innocent” In Rape Retrial
By Jake Viswanath
Get Even More From Bustle — Sign Up For The Newsletter
From hair trends to relationship advice, our daily newsletter has everything you need to sound like a person who’s on TikTok, even if you aren’t.