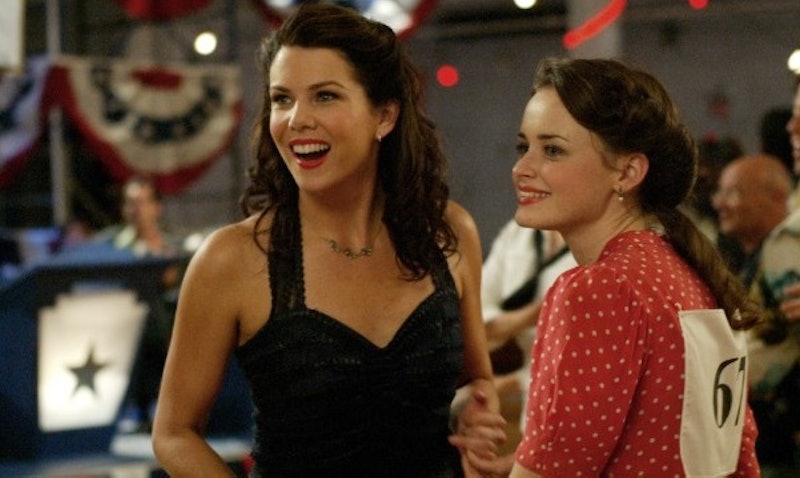 After spending almost a year speculating wildly about plot lines, love interests and potential spoilers for the Gilmore Girls revival on Netflix, it's suffice to say that anticipation for the show has reached a frenzied pinnacle. However, when the first trailer for Gilmore Girls: A Year In The Life was finally released on Tuesday afternoon, I was ecstatic, yes, but I couldn't help but feel a little frustrated at how stripped back and basic the trailer was. There were no actual scenes from the Gilmore Girls revival featured and no other characters involved in it except for Lorelai and Rory (who were, thankfully, on top form). Oy, with the teasing already. Something tells me, however, that this is exactly what show creator Amy Sherman-Palladino may have intended for.

In all of our excitement for the Gilmore Girls revival, it feels like many of us (myself included, I'm totally complicit in this) have forgotten the core essence and values of the show. Fans have spent more time swooning over the potential that Rory may get back together with Dean, Jess, or Logan in the revival, or that Lorelai could be getting married to Luke, than they have wondering who Rory and Lorelai are at this current point in their lives. By focusing purely on the relationship and dynamics between Lorelai and Rory, the trailer is reminding us of one crucial idea — Gilmore Girls is primarily a show about female relationships, and men will always come second to that.

Now, don't get me wrong. I'm as much of a ridiculous romantic as I am an ardent feminist, and, as such, I still need to know that both Rory and Lorelai will be getting swept off their feet by the men that I dearly want for them to be with. But the trailer reinforces the comforting notion that, although the romantic obsessions of Gilmore Girls fans can get a little out of hand (totally guilty), the people working on the show are helping to totally keep it real and maintain everything that made the original series phenomenal. And that means putting love stories secondary to female stories.

I'm sure many Gilmore Girls fans will agree with me when I say that the way that the show portrayed and even prioritized female characters and their relationships felt like something of a revelation to me when I first watched it. Here was a series which had seemingly reversed the default gender dynamics of your average TV show, positioning male characters as the ones serving the plot lines of the female ones. In Gilmore Girls, men are love interests, they're quirky side characters, and they're even band members led by an impassioned female drummer. Women are the heart and soul of Gilmore Girls, and the trailer seems deliberate in how it chooses to re-assert this fact to its fans by focusing solely on the core female relationship.

The women of Gilmore Girls are witty, acerbic, intelligent, stubborn, obnoxious, and wonderfully flawed. They don't always make the right decisions or say the correct things at the right times, but they always felt all the more real for it. These are female characters who are incredibly relatable, in spite of, or even because of, how flawed they can be. By revealing the first glimpse of the Gilmore Girls revival within a set-up which seeks only to validate and celebrate the core female relationship of the show, fans are being reminded that nothing has changed or will ever change within the show. This is a proudly female centric series, and it always will be. "Once a Gilmore, always a Gilmore," as the trailer tagline announces.

And that sentiment isn't just framing the idea that our central characters remain to be as beloved, idiosyncratic, and quick-witted as they always were, but also the idea that we, as fans, are Gilmore Girls too. And, as such, it feels like the Gilmore Girls revival trailer is assuring fans that our own desires for how the revival should be will be completely validated when A Year In The Life premieres on Netflix in November. We're as much a part of the Gilmore Girls journey as the central characters are.

So, let's cool down on our Jess, Logan and Dean shipping and our speculation over whether or not Lorelai and Luke are finally tying the knot, and instead focus on what is truly important about Gilmore Girls: the female characters, their careers, their lifestyles and their relationships with each other. It appears to be what Sherman-Palladino is reinforcing the importance of with the first trailer, and it's a sentiment that is hard to argue with.