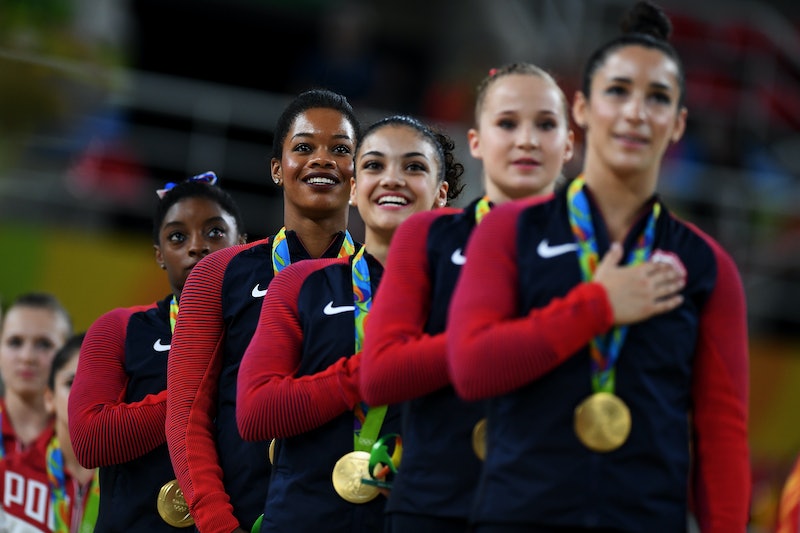 Tuesday's gold medal win for Team USA's "Final Five" at the women's gymnastics team finals brought many smiling faces, proud parents, and tears of joy. But one other thing the win brought was unwarranted criticism. Specifically, reigning women's all-around gold medalist Gabby Douglas was criticized online for not placing her hand over her heart during the medal ceremony while "The Star-Spangled Banner" played. Those disappointed in Douglas flocked to Twitter to express their outrage at the young star, calling her unpatriotic, un-American, and disrespectful, while totally ignoring that she had just helped Team USA win a gold medal. But in addition to the fact that the flack Douglas received was totally blown out of proportion, there was also a double standard at work. That same Tuesday, Michael Phelps received his 20th gold medal for winning the 200-meter butterfly, and during his ceremony, he burst into laughter. But has he been called un-American or disrespectful, like Douglas has? Nope. So what gives?

Just imagine for a moment that you're Douglas. You're the reigning women's all-around gold medalist. You faced enormous challenges to return to the Olympics after giving it your all in 2012. You heard criticism that you weren't even supposed to be on the team heading to Rio, but you made it anyway. You've practiced for years, starting early in the morning for hours a day. You busted your ass during the qualifying round, you gave it your all on the uneven bars, and you helped your team win gold during the team final for the second straight time. In a flurry of adrenaline, hugs, congratulations, friendship, and immense pride, it slipped your mind to put your hand on your heart during the national anthem. As a result, what greets you online is a barrage of spectators criticizing your actions instead of praising your accomplishments.

This is absurd. Douglas is hardly the first American Olympian to keep her arms at her side or in any other position during the national anthem. Not every member of the 1992 men's basketball "Dream Team" did, and in 1968, track and field athletes Tommie Smith and John Carlos gave the Black Power salute during their ceremony. After winning his fourth gold medal in 1936, Jesse Owens saluted the flag during his ceremony, despite the rule that only members of the military should do so. Yes, holding one's hand over their heart during the national anthem is considered law, but that is by no means enforceable. U.S. Code says that, during the national anthem, any non-military citizen "should face the flag and stand at attention with their right hand over the heart." But as Slate points out, "Though the procedure for listening to the national anthem is spelled out in the U.S. Code, you can't be punished for breaking the rules. That would likely be considered a violation of the First Amendment." Just think about any sporting event you've been to in your life. Does the entire arena hold their hands over their hearts? Not a chance.

Not only should critics cut Douglas some slack, but they should also examine the double standard at play when it comes to what behavior we expect of women versus men. Phelps burst into laughter during his medal ceremony because of an inside joke with his friends. As he told an NBC reporter after the ceremony, "My boys from Baltimore were down on the other end, and back in Maryland, we all say 'O!' for the Orioles during that part of the National Anthem. And all of the sudden I hear them roar 'O!' and... just lost it." But Phelps' laughter has been met with a very different reaction than Douglas' actions. No one has called it disrespectful or unpatriotic, with articles explaining the laughter by saying that it's totally OK and citing Phelps' hometown pride. It's a clear double standard that folks are criticizing Douglas, a tremendous athlete, for simply standing respectfully, while Phelps' flub is only considered adorable.

And really, neither athlete should have their actions criticized or analyzed. While these medal ceremonies may have gotten repetitious for Phelps, what with 21 medals and all, there's no reason he shouldn't be able to smile, laugh, wave, sing, or do whatever he chooses to within reason on that podium while he receives his medals, as there are zero official team rules about how to act during that event. But the fact that his laughter was considered fine while Douglas' stance was considered unpatriotic points to a major double standard. Thankfully, the now-three-time gold medalist Douglas doesn't seem to be terribly bothered by the controversy, and has released what sounds like a standard non-apology apology that hints that those offended need to chill. She wrote on her Twitter, "In response to a few tweets I saw tonight, I always stand at attention out of respect for our country whenever the national anthem is played. I never meant any disrespect and apologize if I offended anyone. I’m so overwhelmed at what our team accomplished today and overjoyed that we were able to bring home another gold for our country!"

And that's exactly how Douglas should feel: proud, overjoyed, and incredibly accomplished, without giving heed to any unnecessary criticism.

More like this
11 Super Bowl Instagram Captions To Use On Game Day — Even If You Don’t Like Sports
By Alexis Morillo
The 2023 Super Bowl Commercials Feature A 'Breaking Bad' Reunion & Missy Elliott
By Alyssa Lapid
Twitter Is Shook As Tom Brady Holds Back Tears Announcing His 2nd Retirement
By Marina Watts
All The Ways You Can Watch The Super Bowl In The UK
By Asyia Iftikhar and Darshita Goyal
Get Even More From Bustle — Sign Up For The Newsletter
From hair trends to relationship advice, our daily newsletter has everything you need to sound like a person who’s on TikTok, even if you aren’t.