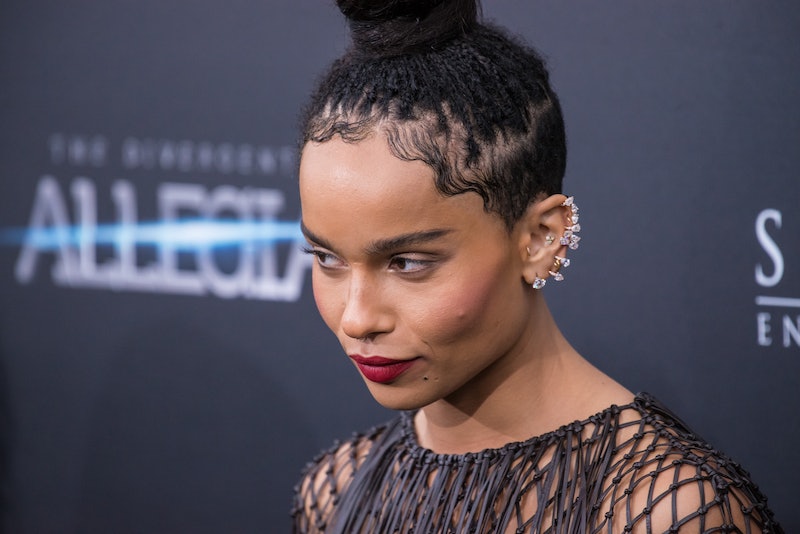 With its November 18 release date looming large, I bet you thought there were no more Fantastic Beasts and Where To Find Them casting alerts in the future — but you were wrong, guys. The Hollywood Reporter revealed Zoe Kravitz has joined Fantastic Beasts in a small, mysterious role, despite the film currently being in post-production. Kravitz joins an all-star cast that already includes Eddie Redmayne, Ezra Miller, Colin Farrell, Katherine Waterston, and Ron Perlman.

Fantastic Beasts follows magizoologist Newt Scamander's research in the field of magical creatures. Set 70 years prior to the events of the Harry Potter series, Newt's journey takes him deep into New York and the magical society that resides there. Even more than that, the movie is a mystery in itself: Based on a Hogwarts text book (which J.K. Rowling was kind enough to publish for muggles to read), much of the story is being kept under wraps. One big thing fans do know is a sequel is already in the works, and while Kravitz's role in Fantastic Beasts may be small it could grow in future installments.

Having Kravitz join the film is an exciting development. The daughter of rock legend Lenny Kravitz, Zoe Kravitz has been busy carving out an impressive film career for herself in recent years. She has appeared in Mad Max: Fury Road, X:Men: First Class, and the Divergent series. Kravitz is only becoming more in demand making her the perfect actress to add to the latest extension of the Harry Potter franchise.

Aside from Newt, most of the characters in Fantastic Beasts are completely new characters. Rowling, who wrote the screenplay, has built quite an extension to her existing universe. That means Kravitz could be playing a character the audience will have never heard of, but who Rowling may have big plans for. Fantastic Beasts is in need of amazing female characters like Hermione, Luna, and Professor McGonagall to round out its story, and Kravitz's previous roles have showcased her talents for playing take no prisoners characters.

Newt needs someone at his side tracking down magical creatures, and wouldn't it be amazing if Kravitz shows up at the end of the movie as a fellow Magizoologist sent by the Ministry to join Newt on his next mission? Of course there is always a small chance Kravitz will play either an ancestor to an existing Harry Potter character or a younger version of a character fans know. It would be amazing if Kravitz was related to the infinitely cool Kingsley Schacklebolt — in fact, if Kravitz's character is a relative of Kingsley it could explain where Kingsley got his cool from.

Whether her character is brand new or connected to a pre-existing character, Kravitz's last minute addition is a curious, but welcome development. Having Kravitz join the cast at the last minute to take on a small role speaks volumes about the progress of the sequel. Unless Kravitz is meant to have a one off cameo appearance — which would be way too cruel given her awesomeness — her casting indicates a story for the next chapter of Fantastic Beasts is already coming together.

Here is hoping Kravitz's mystery character becomes a mainstay in the franchise and fans get the pleasure of seeing Kravitz rock out as a witch for years to come.