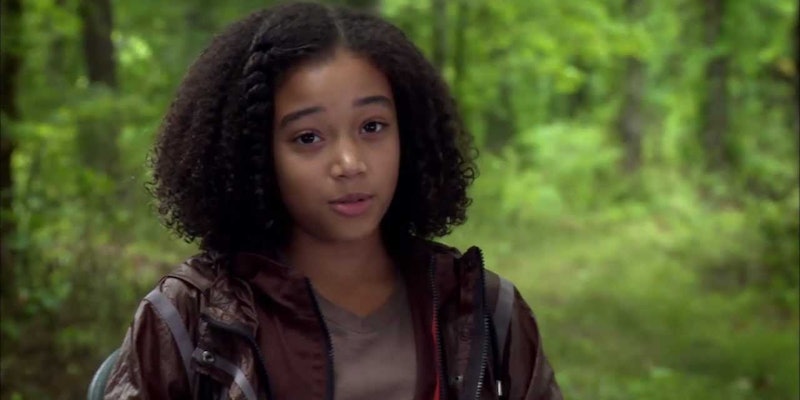 There's nothing like a literary baby name to class up an otherwise average infant. But everyone and their mom is already naming babies things like Emma and Eloise and Khaleesi. Some of the very best names from literature have been used and reused, until they lose that unique, bookish feel. So why not venture into a more specific genre of literature? Science fiction has brought us some of the most inventive stories ever written, so here are a few baby names from sci-fi, for the baby who's ahead of their time.

I mean, sure, there are some sci-fi names that you probably want to stay away from. I don't think anyone is arguing that you should name a baby Uranus or Spock. Even Zaphod is pushing it a little. But there's a lot more to science fiction than space lasers—not every sci-fi hero is named Flash or Bucky, and not every sci-fi story is pure fluff. Science fiction characters can be strong, intelligent, gifted in the art of human-alien diplomacy, etc. And the names that sci-fi writers come up with range from the ordinary to the utterly (and beautifully) bizarre.

So here are some unique baby names from the far-off worlds of science fiction:

"Alia" is the perfect name for a telepathic, assassin baby. At least, in Frank Herbert's Dune, little Alia is kind of a magical space baby who kills her own evil grandfather when she's only four (he deserved it). But "Alia" works well if you're looking for a pretty, spacey name with an edge.

"Ender" is actually a nickname for Andrew in Ender's Game, but it's still a very cute name for a little boy or girl destined to be a brilliant military tactician (why are so many sci-fi babies allowed on the battlefield?). Ender is forced to start training for war at age six, so emulating his life is probably not such a great idea... but it's a cute name, right?

3. Rue from The Hunger Games

Every kid on the block in named Katniss. But the name "Rue" is just as good (and significantly more tragic). Here's yet another sci-fi baby forced into violence with the whole Hunger Games thing, but Rue herself is sweet and caring. She's not interested in murdering other children, and her death sparks a worldwide revolution. "Rue" is also the name of a flower, so it's not a strictly sci-fi name, either.

The biblical Lilith gets a bit of a bad rap. But Octavia Butler's Lilith Iyapo is the savior of mankind. Well, sort of... she's one of the last surviving humans on Earth, and she must either merge her genetics with aliens to create a new breed of humanity, or let the human race die off altogether. No pressure. As the mother of a new, post-apocalyptic world, though, she's definitely a deserving namesake.

This one might be better as a nickname. Young Tan-Tan lives on the Carribean-colonized planet of Toussaint, until she and her father are exiled to a far-off and far more dangerous world. Tan-Tan's story is a classic coming-of-age tale, complete with strange and mysterious new powers, and her name is the perfect blend of adorable and tough.

6. Lyra from The Golden Compass

Who doesn't love a pathological liar? Lyra "Silvertongue" Belacqua is a talented liar, as well as an inter-dimensional traveler and a scrappy little girl. The Golden Compass is far on the fantasy end of sci-fi, but Lyra is named after a constellation, so her name works well for any kid destined to be a stargazer.

7. Ford from The Hitchhiker's Guide to the Galaxy

There are so many great names in The Hitchhiker's Guide to the Galaxy: Zaphod, Trillion, Marvin. Even Arthur is a pretty solid name. But if you're looking for a space-friendly name that's not too out there, consider Ford Prefect (just the Ford part, you don't have to name anyone "Prefect"). Ford is a goofy character, but he has a quick wit and his heart is (mostly) in the right place.

8. Valentine from Stranger in a Strange Land

Heinlein didn't invent the name Valentine, of course, but he may have been the first person to use it for a human boy raised by Martians. Stranger in a Strange Land is a little outdated nowadays, but when it first came out it was a wildly progressive love letter to the free love movement. Valentine is a human with Martian values, and he preaches love, tolerance, and grokking.

9. Nemo from Twenty Thousand Leagues Under the Sea

Jules Verne was one of the first hard-sci-fi writers—almost all of his gadgets were scientifically sound. But that doesn't mean he ignored the character side of science fiction: Captain Nemo is by far the grumpiest sci-fi characters in history. He's not exactly a cuddly guy, but the name "Nemo" (Latin for "nobody") has a certain charm to it.

If you are interested in the softer, pulpier side of sci-fi, why not go with a name from a classic like sci-fi comic like Flash Gordon? You don't have to pick the name "Flash," either. Flash's longtime love interest Dale Arden has a unique name that doesn't sound too much like a comic book heroine.

11. Dejah from A Princess of Mars

Speaking of pulpy sci-fi, there's Dejah Thoris from A Princess of Mars. She's a bit of a damsel in distress, sure, but she's also portrayed as competent in her own right, and capable of defending herself in the Martian wastelands. And, of course, she's the princess of a bunch of bug monsters, so you can't go wrong there.

12. Oryx from Oryx and Crake

Margaret Atwood's Oryx and Crake is equal parts love story and terrifying vision of the future. And sure, Oryx is named after a type of antelope, but it still has a nice ring to it. Oryx is the long lost love of our narrator, cloaked in mystery, and treated terribly by the men in her life. But still... nice name.