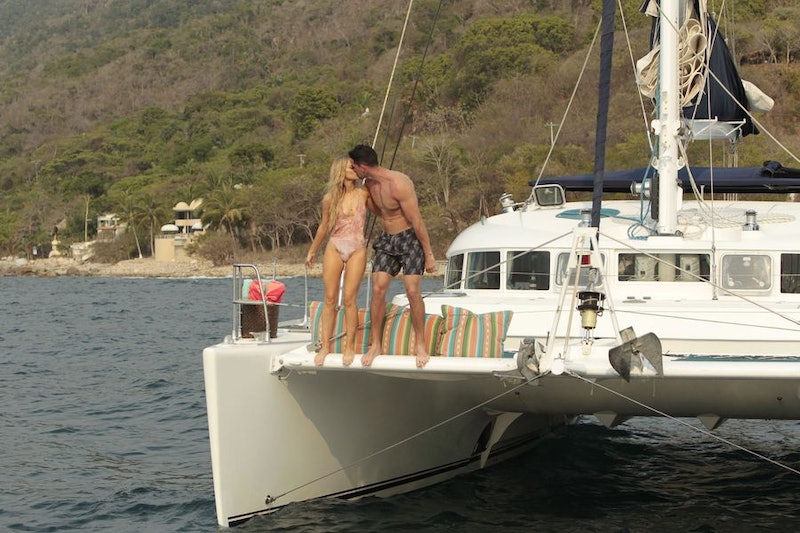 Bachelor In Paradise is only a month-long stint in Mexico, so you better believe that the couples are joining together faster than Jorge can shake a margarita. One of those couples is Amanda Stanton (of Ben Higgins’ season of The Bachelor) and Josh Murray (winner of Andi Dorfman’s season of The Bachelorette). They went on one date, and now they can’t stop making out — I can’t imagine how chafed Amanda’s face is from Josh’s beard. I have to admit, though, that they seem to be a weird pairing to me. Why does Amanda like Josh during Bachelor In Paradise ? Luckily, the hosts of Bustle's Bachelorette podcast, Will You Accept This Podcast? tackled this tough topic this week.

Josh came into Bachelor In Paradise like a well-chiseled hurricane, which was definitely a problem for Nick Viall, who has already fought over the same girl with Josh and lost (spoiler alert: it seems like he lost again). Amanda and Josh had one date and are glued together now. What is it about Josh that makes him so attractive? Romper TV Editor Allison Piwowarski has a theory that it has to do with Amanda’s role in a relationship — she seems to be the more submissive member of the pairing — and Josh’s commanding role and overt confidence are probably attractive to her, albeit maybe not necessarily for the right reasons.

In my own experience, it’s hard for a relationship to work with two dominant personalities — you just tend to clash heads more than anything else. But, there also can’t be one person who is just a doormat — that’s not a way to go through life, either. There needs to be some degree of give and take when it comes to who is ruling the roost. What concerns me are the rumors about just how domineering Josh can be. In her tell-all book, It’s Not Okay, Andi Dorfman made claims that Josh was emotionally abusive during their relationship, even allegedly calling her a whore after he found out that she also had sex with Nick Viall during her season of The Bachelorette. Josh refuted those claims on Bachelor In Paradise, telling Amanda, “[Andi] has not-so-kind things to say, and it's very unfortunate that she would depict me in such a false way.” He later denied the claims at length in his talking head. "I can't comment on specific things in any kind of book that my ex has written, because it's a fictional story," he said. "There's stuff that's so ludicrous; how do you comment on stuff like that?"

Obviously, no one knows what happened between Andi and Josh except for Andi and Josh, and it seems like Amanda was happy with Josh's explanation of the book. So, what will make Amanda and Josh stay together? On this episode of Will You Accept This Podcast?, Romper TV Editor Allison Piwowarski and Bustle Entertainment Editor Kelsea Stahler chat about just why Amanda and Josh clicked so fast and whether or not they'll make it down the aisle.

Amanda is quiet and Josh is loud and perhaps that’s the yin and yang deal they need to make their pairing work. We’ll see if these two stick together long-term...