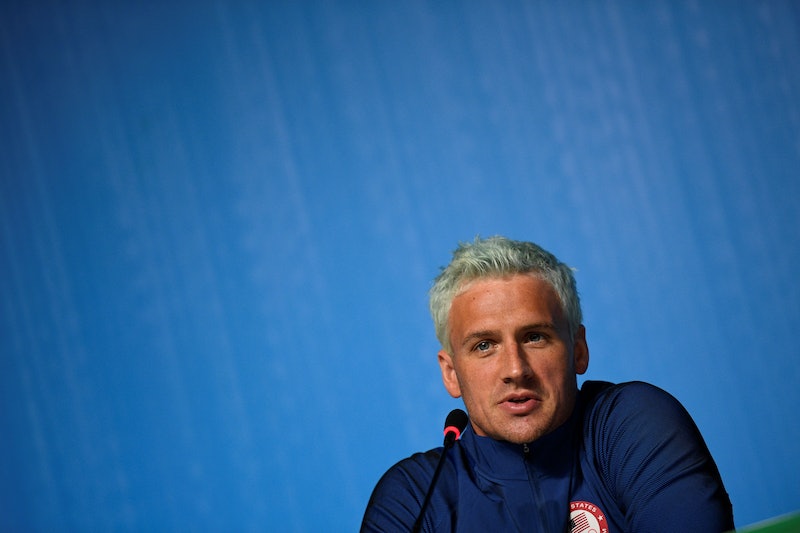 I'll be the first to admit that when Ryan Lochte debuted his ice blue hair on Instagram, all of my plans for thirsting hard on the six-time gold medalist in Rio were immediately ground to a halt. I waited four long years to shamelessly ogle you on TV, Lochte, and you're going to go ahead and ruin it all by dying your hair a Sisqo-esque silvery gray right before the Olympics?! The anger was just as irrational as it was real, and I was far from the only one: Echoes of "Oh, Ryan Lochte, what did you do to your hair?" reverberated everywhere from Esquire to Twitter; the whole "silver fox" thing just getting even more ridiculous now that his hair has faded to a blue-green thanks to the chlorine in the water.

But then: Then came the 4x200M relay on Tuesday night, the first time I saw Lochte's hair in real-time and off of social media. And I was pleasantly surprised to discover that the Olympic swimmer still looked hot AF, the grayish, slightly blue-green mess only serving to deepen his tan and set off his light eyes. I mean, I was cheering loudly when the Olympics swimmers got their gold medal in the race, but part of that cheer was for the fact that Lochte looked damn good doing it, with the silvery hair accentuating all of his best features. To quote Homer Simpson drooling over a donut: "Mmmm."

It seems like Lochte has his "thing" every Olympic games: In London it was that embarrassing blinged-out grill. It was also "jeah." In Rio, it's his silver mane. It's also the fact that that mane is now mermaid-esque, which definitely serves as fuel for the Internet to once again poke fun at his "frat bro" persona and the whole "dumb jock" stereotype — after all, being an Olympic swimmer, you'd think you'd be aware of the effect that chlorine has on bleached hair. (I personally find the whole thing oddly endearing, but then again I've already revealed my apparently unrelenting Lochte obsession.)

So here I am, here to tell you that worshipping Lochte's good looks, grayish blue hair and all, is not only socially acceptable this Olympics, it's encouraged. I get the mixed feelings — and most of all, I get the wistful reminiscing of a time when he rocked his beautiful, natural brown hair — but right now, we're dealing with Silver Fox Lochte, and I am most certainly on board. And in the meantime, may we always remember this...