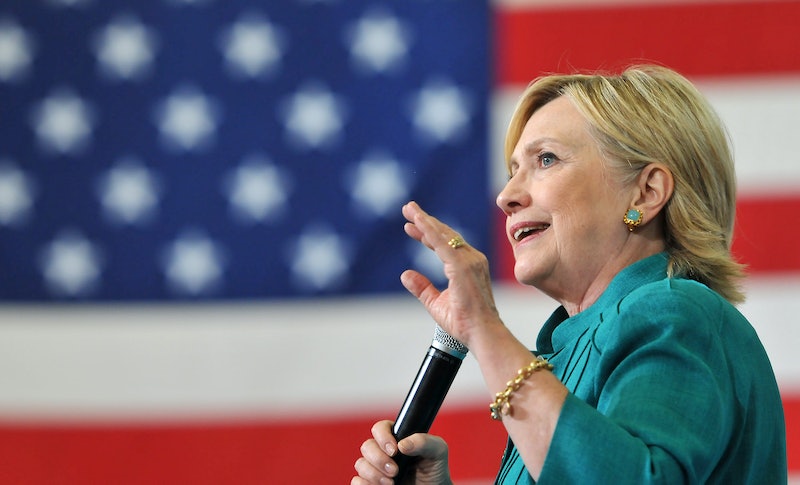 Only a week and a half into August, and it already seems like Donald Trump couldn't possibly say anything else to make his campaign implode any further. Just one day after seemingly suggesting that his supporters assassinate Hillary Clinton, he goes and does it again. Trump claimed that President Obama and Clinton are the cofounders of ISIS. No, he did not misspeak. Trump's latest remarks are the first to also tie in President Obama to the theory; previously, he had only saved that special designation for the former secretary of state.

Despite being a theory shared by the likes of dictators, Clinton's campaign issued a response to the ISIS claim because, well, it's the 2016 election and I guess anything goes. The Clinton campaign called the remarks "a false claim." Clinton's senior policy advisor Jake Sullivan went on to state:

This is another example of Donald Trump trash-talking the United States. What's remarkable about Trump's comments is that once again, he's echoing the talking points of [Russian President Vladimir] Putin and our adversaries to attack American leaders and American interests, while failing to offer any serious plans to confront terrorism or make this country more secure.

Though Trump is known to walk back his statements, he hasn't done the same with this one. During conservative talk show host Hugh Hewitt's radio program on Thursday, Hewitt attempted to get Trump to clarify his statement, suggesting that the nominee's position was a hyperbolic one. But Trump wasn't skirting around the issue. He emphatically told the radio host, "No, I meant he's the founder of ISIS. I do. He was the most valuable player. I give him the most valuable player award. I give her, too, by the way, Hillary Clinton." The exasperated, inner sigh surely coming from Hewitt was practically palpable.

Tune in next week (or later today, most likely) to find out what ridiculous claim Trump will make next. Trump will surely leave no stone unturned.