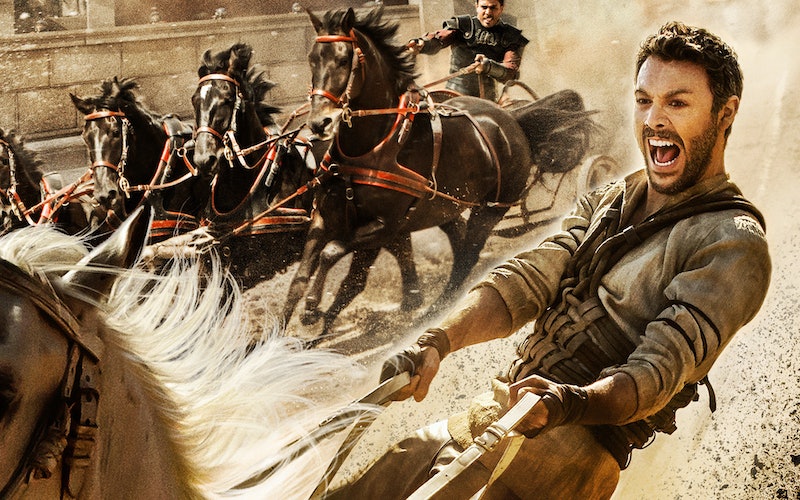 Jack Huston stars as the titular character in the new action film Ben-Hur , in theaters Aug. 19. The film finds Huston as a nobleman in Jerusalem at the beginning of the first century who is made a slave to the Romans after being falsely accused of assassination. Ben-Hur seeks revenge on the friend-turned-foe responsible for his imprisonment, challenging him to a chariot race to the death. But as these events unfold, Ben-Hur's story intertwines with that of an unlikely character: Jesus of Nazareth. This aspect of the plot totally changes the story and blurs the lines around the boundaries of fiction and reality, and while Ben-Hur was not a real person, his tale is as fascinating as if it were true.

The character may not have been a historical figure, but he was the product of the imagination of American author Lew Wallace. Wallace's book Ben-Hur: A Tale of the Christ was first published in 1880 and quickly gained worldwide renown. Through the experiences of its main character, Ben-Hur explored themes of vengeance, forgiveness, redemption, and spiritual growth. Ben-Hur thus was a fictional character who served as a channel through which Wallace could ponder real-life questions about the human experience.

In addition to being a famous figure in literature, the character Ben-Hur has been portrayed in many theatre, film, and TV adaptations. Here are a few of the most well-known.

The character first appeared onscreen in a short film in 1907, in which he was portrayed by Herman Rottger.

Although it was a financial failure at the time, this silent film starring Ramon Novarro was highly praised and helped put MGM (which was a new studio at the time) on the map.

This adaptation was the most expensive film ever made at the time, but it then became the second-highest grossing film of all time (and the highest-grossing of 1959). It also won an astounding 11 Academy Awards, including one for Charlton Heston for Best Actor.

Heston reprised his role of Ben-Hur in a unique way for this project: as a voice actor for a cartoon version of the character. This direct-to-video release was produced by Heston's own production company.

So although Ben Hur was not a real person, he has been a major figure in American culture for over a century. With any luck, Huston's portrayal in the new movie will do justice to the character and his rich past.