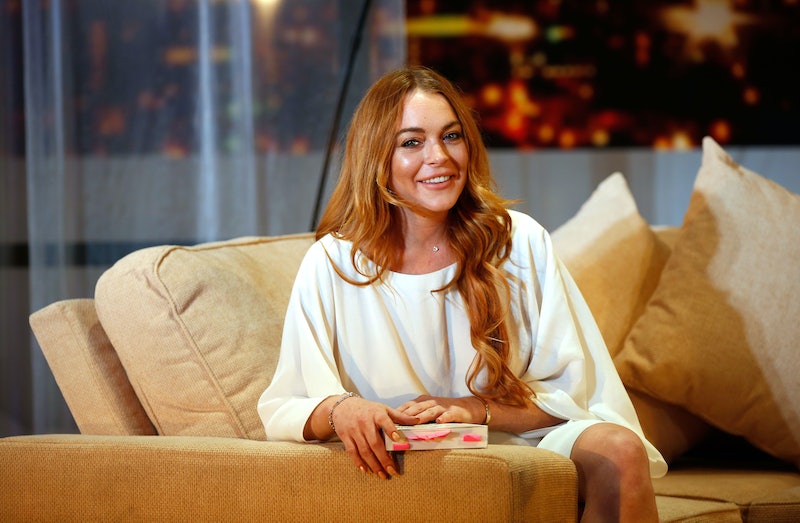 As much as the idea of a Lindsay Lohan comeback thrills me as a '90s kid/'00s teen to no end, I have to be honest: I'm not sure what a comeback will mean for Lohan and her career considering her turbulent relationship with Hollywood the last time she was active in the 'biz. If the rumors of this potential Lohan comeback are true, I'm just hopeful Lohan won't fall down the same rabbit hole.

So, where to these reports come from? Page Six reports that Lohan was doing her thing at fancy birthday party in Sardinia, Italy (you know, as you do) where she was allegedly “telling people she is going to spend more time in Hollywood and on her comeback.” This news comes after her alleged split with Egor Tarabasov. Could they be connected? Because, LiLo, I know breakups are hard, but usually the best way to deal with them isn't to subject yourself to the harsh light of celebrity.

There are a few theories when it comes to this news. Complex, for instance, theorizes that if Lohan does get back into "the biz," it will be via her music career. They cite a live chat with her Mean Girls costar Rajiv Surendra (aka Kevin Gnapoor) where the actress turned pop singer, turned person-taking-time-for-herself, turned maybe pop singer again said that she “[has to] record another album for Universal Motown. And I will." Complex also brings up a screenshot of the former child star listening to her album, A Little More Personal, which she shared on her personal Instagram. Both of these things definitely seem like hints towards a new album.

While I am certain nothing would be more fetch than a reboot of my favorite redhead's career, I really hope Lohan returns to Hollywood on her own terms and in the healthiest way possible. Her happiness is the most important — because as much as I love to be entertained by LiLo, I also want her to be OK. Hopping right back into celebrity right after an (alleged!) breakup might not be super healthy, so I'm only OK with this as long as she is.

Of course, despite my fears, Lindsay Lohan is 30 now, and in an interview with Vanity Fair she shared that she has grown much wiser since her youth. She gave her younger self the advice, "Put yourself first, and just breathe. Be happy and always be grateful for the moment you have in front of you. Be here, now." Maybe g has made her more aware of herself and her needs — which means going back into an industry that seemed to almost tear her apart might be A-OK.

I am ever-so-hopeful that 30-year-old zen Lindsay Lohan will be able to make a comeback that isn't detrimental to her well-being. She's been through a lot and has come out the wiser for it, so hopefully she'll be able to come back on top. Best of luck, LiLo, it will be grool to (maybe) see you again!