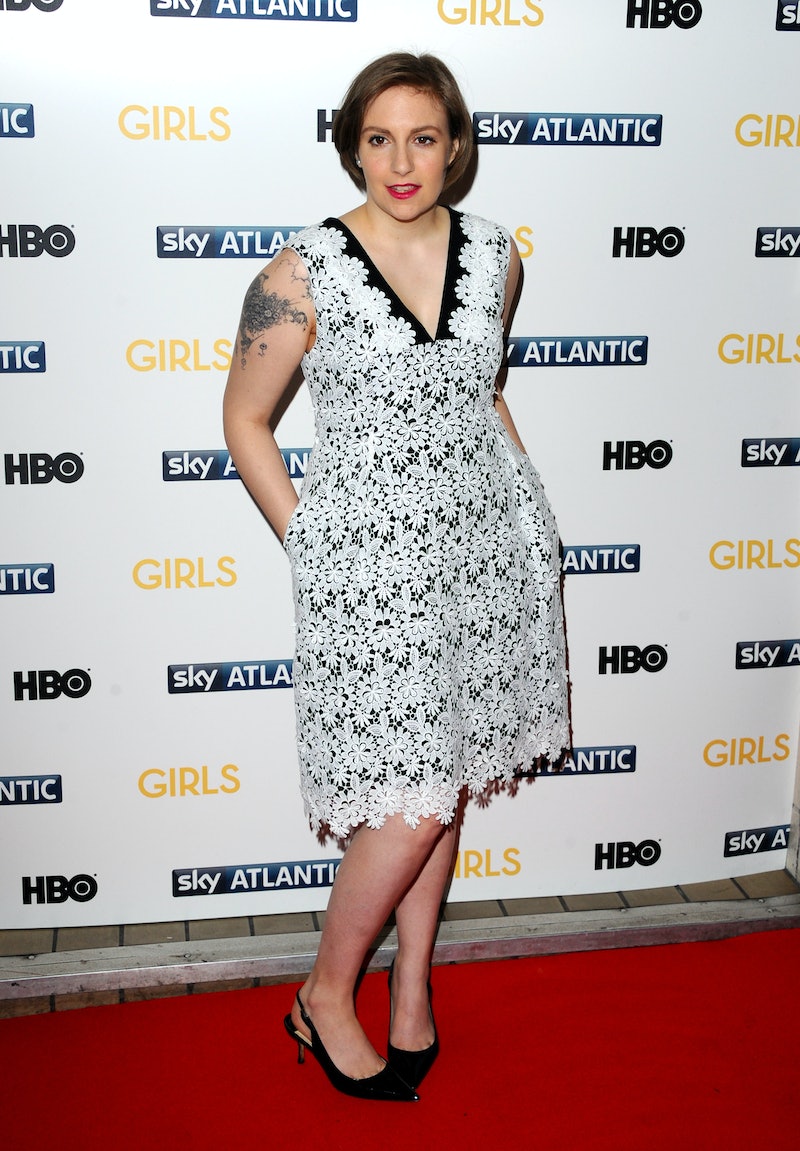 Love her or hate her, one thing is clear: Lena Dunham is no Hannah Horvath. She has risen to the top of a male-dominated field and is now taking over newsstands as well with an impressive line-up of fashion covers. The latest is the Dunham's three Glamour covers, which feature the Girls star differently than most other fashion magazines have.

For the main April cover image, Dunham sports a Rag & Bone dress, a perfectly executed cat-eye, and a cheeky facial expression. The text advertising Dunham's editorial inside the issue announces "Girls' Lena Dunham: Why she's OVER talking about her body." On the second cover, she sports an asymmetrical Narciso Rodriguez number in bright yellow with a single pearl earring hanging down past her shoulder and the third image features her in a red, jewel-encrusted Prada dress with a stomach cut-out.

This all might sound like standard fashion mag fare, but the Glamour covers are unique for several reasons. We'll start with the most obvious reason: these outfits are cute! I literally want to wear all of them. Seriously, I am so impressed with the styling of this shoot that I have now decided the cat-eye and a single pearl earring should be my signature look. Thanks Glamour!

Clothing aside, these covers are special because they are not afraid to show off Dunham's body. Her previous covers for Vogue and Marie Claire focused on her head and face, as did her cover for Rolling Stone, albeit in a more revealing outfit. The Glamour images, by contrast feature full-body images of Dunham in sleeveless, form-fitting outfits — again, I direct you to the cut-out on the Prada dress. Dunham's body is not being hidden here. And this is a big deal, if not for Dunham, than for the rest of us.

Vogue's February cover, while awesome, showed Dunham only above the shoulders, while Marie Claire and Rolling Stone focused on above-the-ribcage shots. Just one instance of this wouldn't mean anything. After all, as Bustle's own Mackenzie Brewster pointed out, the Vogue cover recalls the magazine's famous image of '60s supermodel Twiggy, and we all know how thin she was. But the fact that it has happened not once but three times shows that this is a pattern.

While Dunham might be over talking about her body, the media is clearly not. Hopefully the Glamour covers will send a message about featuring celebrities of varying body types in the pages of magazines. Photographers don't need to take strategic images of Dunham simply because she looks like a normal woman instead of a supermodel. She is hot in these covers. And while she has most certainly been Photoshopped, like all women featured in high fashion magazines, she is far from unrecognizable.

Speaking of Photoshop, Glamour must also be commended for leaving Dunham's tattoos in the images. Fashion magazines often shy away from featuring models' and actors' tattoos, especially in the cover images, for fear of isolating readers who are against getting inked. But this practice sends a harmful message about homogeny, one that I'd argue is nearly as dangerous as perpetuating unhealthy body image. All of Dunham's previous magazine covers have made an effort to downplay, if not completely hide her tattoos. (We're only talking cover images here, not the editorial photos.) Glamour features them front and center in the main image, and they are somewhat prominent in both the other covers. Leaving tattoos in cover images seems like a growing trend; Brides magazine's April/May cover features Hayden Panettiere sporting a back tattoo and a strapless wedding dress.

All of these details add up to three lovely and interesting covers that faithfully represent Lena Dunham as an exciting, intelligent, tattooed woman worthy of reading about (and photographing). Magazines hoping to have her on their cover in the future, take note of what Glamour has done.