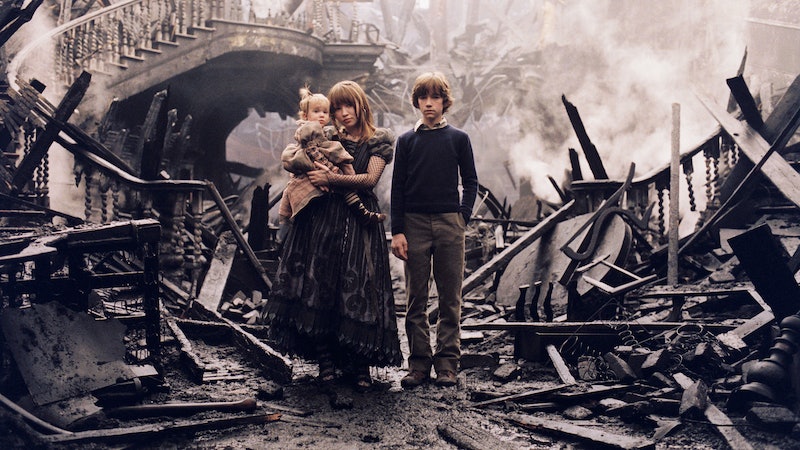 Because I was a neurotic, macabre little kid, I was a huge fan of the A Series of Unfortunate Events books by Lemony Snicket (pen name of Daniel Handler). In a world full of children's books that promised happy endings, the series delighted in throwing its young characters in dangerous and depressing situations, cheerfully providing readers with unhappy endings where the bad guys regularly won. Though it may not sound like it, it was also hilarious series that still cracks me up.

To give you a brief recap, the series followed the sorrows of the Baudelaire children, whose parents died in a fire and left them a massive fortune. They fall into the care of the wicked Count Olaf, who's determined to steal their inheritance at any cost. Throughout the series the orphans are shuttled between multiple guardians, all of whom fail to keep them safe from Count Olaf. The Baudelaires are determined to stay out of his clutches while also investigating the mystery surrounding their parents' deaths.

The series ran 13 books, and each book was more horrifying than the one that preceded it. If one book features a kidnapping, another will raise the stakes by killing someone, typically in a gruesome fashion. Arson is a reoccurring plot point. I repeat: these were very, very dark children's books. But for a subset of young readers, this series also helped us realize and cultivate a morbid sense of humor, which I treasure to this day.

As dark as all of the books are, some are more unfortunate than others. Below I've ranked the series from least to most unfortunate, though of course this is rather subjective. If you think someone being eaten alive by leeches should claim the top spot, I can't really argue with you.

13. The End: Book the Thirteenth

In comparison to the rest of the novels in the series, The End is practically cheery. Not only does the adorable Incredibly Deadly Viper make an appearance (and potentially saves an entire group of dying people), but we see kind-of sort-of redemption for Count Olaf. And because the ending is left somewhat up to the readers, we can imagine that the Baudelaires are finally able to get a potentially happy ending.

12. The Grim Grotto: Book the Eleventh

Besides The End, this is the only other novel that gives us a hopeful ending. Sure, Sunny almost dies after being poisoned, but it's not like the siblings haven't been in sticky situations before. By the end, they're given two potential hopes of salvation: the kind but useless Mr. Poe wants to take them to the police for help, and the mysterious Kit Snicket shows up to whisk them away. These kids rarely find one person willing to help them, let alone two.

11. The Bad Beginning: Book the First

No one dies in this one, which makes it practically lighthearted. Yes, Sunny gets locked in a birdcage and Violet is nearly forced to marry the disgusting Count Olaf, but we also meet Justice Strauss, who's one of the few sincerely good characters in the series. Even though Count Olaf escapes, at least the novel ends with everyone realizing that he's a horrible person and demanding justice, which doesn't happen much in the later novels.

10. The Wide Window: Book the Third

I know that Aunt Josephine dies a pretty terrible death (eaten alive by bloodthirsty leeches), but was I the only one who didn't care that much? Sorry to sound cruel, but Aunt Josephine was pretty annoying and the Baudelaires weren't particularly happy in her care. I didn't necessarily want her to die, but I wasn't exactly rooting for the orphans to stay with her.

9. The Miserable Mill: Book the Fourth

The Baudelaires escape their time at a terrible lumbermill relatively unscathed, except for Klaus's unexamined psychological damage. I mean, the kid did crush the leg of a coworker and almost killed that same coworker with a buzz saw. Sure, he was under the influence of hypnosis at the time, but that still has to be pretty scarring.

8. The Ersatz Elevator: Book the Sixth

This novel gives us Esmé, Count Olaf's new horrible girlfriend, who will become a constant annoyance in the novels to come. What's really sad about this novel, however, is that the Baudelaires finally have a guardian who honestly cares for them and wants to protect them from Count Olaf. Unfortunately, the Baudelaires still need to rescue the Quagmires, and Jerome is too much of a coward to help them, so they part ways. Sad face.

7. The Austere Academy: Book the Fifth

The biggest "pro" of this book is the introduction of the Quagmire orphans, who prove to be wonderful friends to the Baudelaires and are a welcomed relief from the many false-friends they meet along the way. The "cons", of course, are that those friends are promptly kidnapped, the Baudelaires are treated unfairly by their cruel principal, and we're introduced to the horrible Carmelita Spats.

6. The Slippery Slope: Book the Tenth

A couple of joyful notes in this book: Klaus and Violet don't die in a car crash, the three Baudelaires are reunited, and Violet finds a potential love interest in the third Quagmire sibling, Quigley. The negatives are the reappearance of the dreadful Carmelita Spats, who is seriously the worst, and Quigley's untimely disappearance after being separated from the Baudelaires in a flood of icy water.

5. The Reptile Room: Book the Second

Dr. Montgomery Montgomery was my favorite guardian, which is why this novel was so upsetting to me. Not only was he a kind man who obviously cared about the orphans, but he wanted to build an exciting life with them that allowed them to follow their passions! The Baudelaires could have lived happily ever after with Mr. Montgomery and the Incredibly Deadly Viper. Alas, it wasn't meant to be.

4. The Vile Village: Book the Seventh

While the Baudelaires do manage to rescue the kidnapped Quagmire siblings (yay!), they are also framed for the murder of an innocent man named Jacques Snicket and are sentenced to be burned at the stake. Though they manage to avoid this fate, the novel still ends with them on the run from a bloodthirsty mob who are convinced the orphans killed Count Olaf, leaving him free to commit wicked deeds without worrying about being caught.

3. The Hostile Hospital: Book the Eighth

Any book that includes an unwanted craniectomy performed by evil henchmen probably isn't going to end well. Although Klaus and Sunny manage to save Violet from this gruesome fate, the trio still finds themselves trapped in the trunk of Count Olaf's car, speeding away towards whatever dastardly plan he has next. Not exactly an encouraging ending.

2. The Penultimate Peril: Book the Twelfth

This book is really only terrible depending on how you interpret the ending, which means it could fall anywhere on this list. If you recall, the book ends with the Baudelaires heading out to sea, watching as the Hotel Denouement burns behind them. It's possible that everyone in the hotel escaped the flames, but it's equally possible that the Baudelaires just killed a ton of people. And that's not including the guy they shot with the harpoon earlier.

1. The Carnivorous Carnival: Book the Ninth

I already hated carnivals, and this book didn't help the matter. Besides having one of the more gruesome deaths in the series (let's just say a pack of lions is involved), the novel ends with Sunny in the clutches of Count Olaf and Violet and Klaus trapped in a car rolling perilously down a mountain. Though obviously the two oldest Baudelaires don't meet their doom, it seemed like a definite possibility at the time.