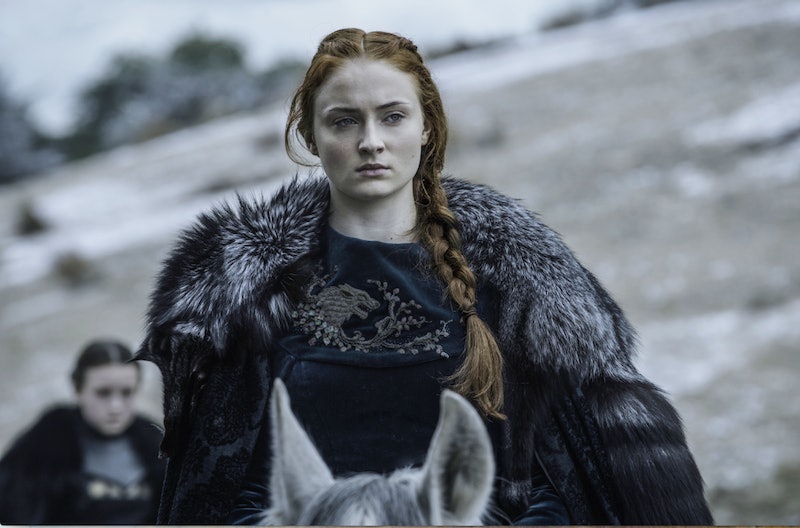 We're getting towards the end of the one of the most intense television series the world has ever seen. Sorry guys, I know it's tough to admit, but there are only 13 episodes of Game of Thrones left — which means very shortly we're going to have someone chilling on the Iron Throne, ruling over all of Westeros. Unless the White Walkers murder everyone, of course. But, until then, of all the candidates, I'm reasonably convinced Sansa Stark would make the best ruler of Westeros.

Every single one of the characters in GoT has gone through some pretty serious character development. Jon Snow straight up died and then came back, Arya figured out how to put other people's faces on like they were Halloween masks, Jaime Lannister started dabbling in being just a hint less evil, the list goes on and on. But Sansa's character development — from whiney teen to princess consort to Lannister wife to runaway to imprisoned lady of Winterfell to escapee to actual lady of Winterfell — makes her hands down the best option for leader of Westeros. And not just because she's the one with the most courtly experience.

I'm all for Daenerys and Jon Snow leading the attack and taking down Cersei. If they did it together and became the Targaryen dream team we've all been dreaming of, all the better. But neither have what it takes to be a ruler of Westeros. Jon Snow's been kicking it north of the Wall so long, he doesn't know how to play the game. And, while Dany gets the game, she is a conqueror. When it comes to actual ruling, she tends to not really understand how to people (see Meereen).

Sansa understands people. She's been struggling to survive and been doing it by silently observing other humans, using their moments of weakness to her advantage. She has seen people treated unfairly, has herself been treated badly, and won't stand by it. She's learned from characters like Margaery Tyrell that the poor need just as much love as the rest of the Kingdom. She's also learned that being royal doesn't really mean much in the grand schemes of things, because dead is dead no matter who you once were. She is humbled and would be kind and fair while still being manipulative enough to handle the dragon-crap of other leaders.

Not only does Sansa understand people, she understands the game. Littlefinger may not be the best role model, but he has certainly taught her how to stay afloat and get on top. While Dany does claim she's going to "break the wheel," if GoT has taught us anything, it's that main characters' plans don't always go as expected. Meanwhile, Sansa has spent the most time in King's Landing, so she understands how that whole leadership of the Seven Kingdoms thing actually works. She knows what a good ruler does (exactly the opposite of everyone else who's she's seen rule) and what a bad ruler does (see Joffrey).

It seems Littlefinger has plans to turn Sansa against Jon Snow, but I'm not banking on that going down. Littlefinger forgets that Sansa is a Stark, and Starks pride loyalty and justice above all. I have a feeling Sansa won't need to fight against Snow and Daenerys in order to take control of the Iron Throne. Both seem to be on a path of destruction; the chants of "King in the North" with regards to Jon were ominous enough, but any mentions of the Mad King in conjunction with the Mother of Dragons are just as terrifying. If they destroy themselves, Sansa will be the only one left. From there, it's just a hop, skip and a jump to the throne.

My theory is that Team Daenerys and Jon + the North will take down Cersei, which, let's be real, is much needed. But then the Targaryen Dream Team will either completely mess up and self-destruct or will both realize they have a higher purpose. A guy who came back from the dead and a girl who brought about the rebirth of dragons must have far more interesting fates than sitting on a pointy throne. While they're off continuing to save the world, they'll need somebody to proceed with their mission of world peace — and who better than Sansa Stark?

Sansa started as the character we all loved to hate, but now she's the one we love to love. We hope for good things to come her way. Ruling Westeros isn't necessarily that great of a thing — for example, the past four kings met pretty gruesome fates — but Sansa's ability to survive and her life experience make her the perfect candidate. I am so hopeful for the coronation of Sansa Stark, Lady of the Seven Kingdoms, Queen of the Andals and the First Men, Protector of the Realm. If only the next two seasons were here already, because this suspense is killing me.