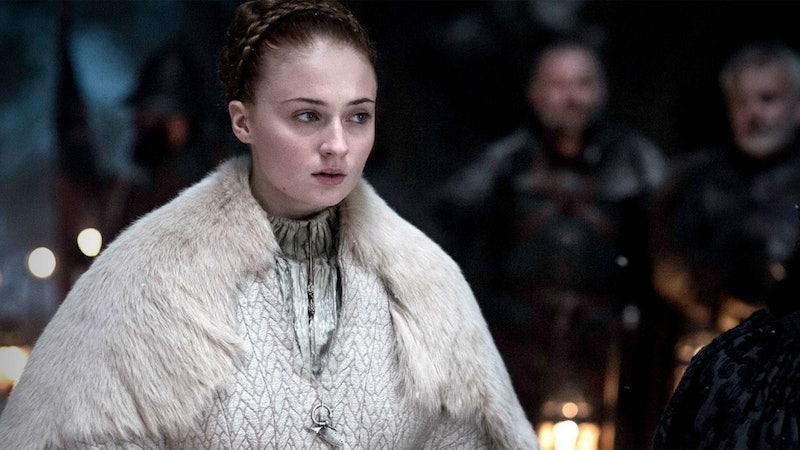 When Game of Thrones first premiered, teenage Stark daughter Sansa (Sophie Turner) probably wasn't anyone's favorite character. She was a whiny teenager, whose sole life goals seemed to include looking pretty and winning the heart of the would-be king, Joffrey Lannister. Yet as the series unfolded, awful things began to happen to Sansa. Her father was beheaded before her eyes, she was imprisoned and tormented by her psychotic fiancé, her mother and brother were slaughtered, and she was raped on the night of her wedding — the second marriage to have been forced upon her.

But through all of that, Sansa has not only endured, but grown smarter, stronger, and learned how to play the game. And now, with Season 6 approaching fast, the idea that she'll be last remaining Stark survivor on Game of Thrones is more and more likely. It's a possibility that may be upsetting to some, but it has a silver lining; I'm starting to think that the series might be setting up Sansa as its ultimate victor.

It wasn't always likely — or even thought possible — that this would be the case. Sansa started the show as an unlikable character, and on the always-dark Game of Thrones, it is essential that fans have characters that they root for. But over the course of the series, Sansa has earned her place as a true fan-favorite, someone viewers can cheer for and want to see succeed. It started after the stunning loss of her father; when Ned died, Sansa's character truly began to develop. And, though she may not have known it herself, the possibility of her eventually becoming the show's strongest, most successful survivor began to take shape.

In Season 4, the most changes to her character happened. That year saw Sansa unknowingly participate in the death of King Joffrey, and although she had been used as a pawn by Littlefinger and Olenna Tyrell, the fact that she was still involved in the death of her tormentor was a major deal. Then, near the end of Season 4, after Littlefinger had killed Sansa's abusive Aunt Lysa, viewers finally saw Sansa free of the chains that had bound her for four seasons. She showed her strength and intelligence in ways rarely seen before, as she used Littlefinger's love for her mother to manipulate him into protecting her, thus keeping herself alive. Thus gave rise to "Darth Sansa" — a raven-haired, fully-grown woman who took her place in the game and decided not to let her fear control her any longer.

But then came Season 5. When Littlefinger orchestrated Sansa's marriage to Ramsey Bolton, it seems like all that Sansa had become, and all of her powerful growth, were taken away in an instant. The addition of a rape that did not take place in George R.R. Martin's original text (in the books, Ramsey weds/rapes Sansa's friend Jeyne Poole, not her) threw fans into an uproar. To many, it seemed like the show was simply throwing Sansa into these dark storylines to create salaciousness. But what if that wasn't the case? What if Sansa's rape was an intentional maneuver on the part of the show? What if it was a major instigator in the show's long-con to see Sansa enact revenge? One young man who tortured her, Joffrey, is already dead, due in part to her hand. Is Ramsey going to be next?

Which leads me to the trailer for Thrones Season 6. The clip shows Sansa say, "It's all I think about, what was taken from me," while a shot of Walder Frey, the man who betrayed and murdered her mother and brother, flashes across the screen. Then there's the character of Davos Seaworth — the trailer shows Davos first at Castle Black, defending the body of Jon Snow, and later standing on a battlefield in front of a Stark banner. This could be the very same battlefield in which we see Sansa, sporting her natural auburn hair color, fur cloaks of the north, and Stark direwolf embellishment, across her chest, with soldiers behind her. She's no longer hiding who she is, and she looks furious. The Darth Sansa we saw at the end of Season 4 might have been a smart, cunning version of her, but the real Sansa exists in these furs, a direwolf across her chest. The real Sansa is a Stark, and Starks want justice.

So is Sansa going to be Thrones' ultimate victor? It's possible, especially because of one other major character: Jon Snow. Though fans may mourn his (possible) death, his absence as Thrones' go-to hero might just mean that such a label is prime for the taking by Sansa. Why shouldn't a woman rise in his place? With Ned, Robb, and Jon dead, Sansa is the eldest inheritor of the Stark line. Bran and Arya both seem involved in magical conflict external to the very worldly battles that Sansa may face, and Rickon is still quite young to be our Stark savior. This leaves Sansa to take it all, and enact her vengeance.

Besides, Sansa actor Sophie Turner has not only pretty much confirmed that Sansa will survive in Season 6, but that the character will go through big changes. At a SAG awards party in January, Turner told Time , "I mean this season is a really, really big one for Sansa. It’s her really coming into her own. She, this season, really commands the respect that she deserves and she grabs hold of it and she runs with it and it’s really good.” Sounds like a Queen in the North is emerging, and, if Jon Snow is really, truly dead while Sansa survives, I see no reason why she won't be the show's ultimate Stark hero. If all goes as planned, Sansa Stark could very well win the Game of Thrones.

More like this
Viserys’ Fate On 'House Of The Dragon' Could Differ From The Book In This Surprising Way
By Grace Wehniainen
You’ll Definitely Recognise Both Of Ty Tennant’s Parents
By Maxine Harrison
'House Of The Dragon’s Theo Nate Is A “Massive” 'GoT' Fan
By Maxine Harrison
'The Lord of the Rings: The Rings of Power' Revisits Iconic Spots From 'The Hobbit'
By Darshita Goyal
Get Even More From Bustle — Sign Up For The Newsletter