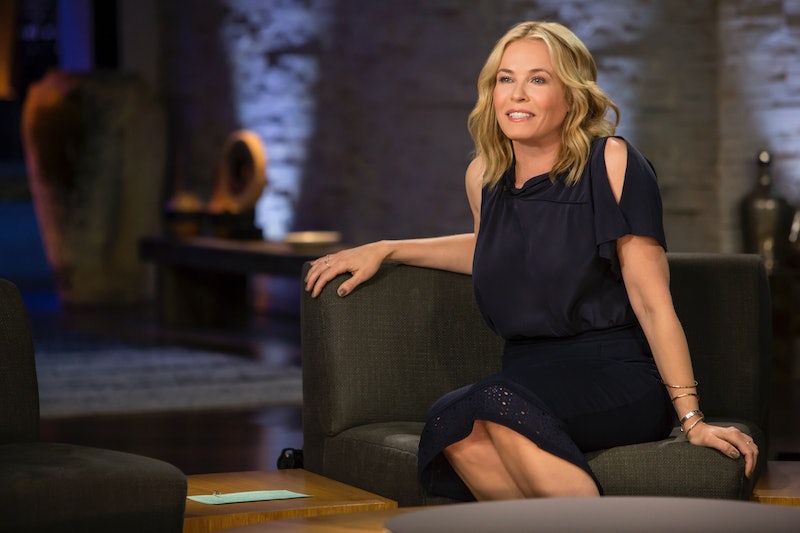 Chelsea Handler has made clear on multiple occasions that she enjoys the single life and is totally content without kids — but not having a child certainly doesn't mean she's not an important role model to young girls and women. Case in point — on the Aug. 10 episode of Chelsea , Handler's niece Charley joined her aunt on set to co-host the episode. It was predictably adorable, as Handler kicked off the show by gifting the 11-year-old with a golden retriever puppy because as she's always eager to remind us, "you have to have a dog to have a talk show." (I couldn't agree more.)

Charley is definitely as candid as her aunt, explaining to the audience that, "I love [Handler] because she's my aunt, but I don't always approve of her lifestyle." But, Handler's definitely not a regular aunt — she's a cool aunt. Not only did she give Charley a puppy, but she took her to a comedy class at the studio where she got her start many years ago. Charley tried her hand at standup and she definitely has a bright future in comedy, just like her aunt. She concluded her routine by talking about some girls in her grade who didn't invite her to a sleepover: "I was like that's okay; I'm out filming a Netflix show with my Aunt Chelsea." When the teacher asked her what she got out of the routine she answered, "confidence!"

Back on set, Handler explained to Charley that her show covers a wide range of topics — one of the most important of which is politics. Since the show's premiere, Handler has placed the 2016 election front and center in nearly every episode — and it's typically not because she wants to use it as fodder for her jokes (although she gets in plenty of jabs). Her main priority has been to emphasize the importance of voting, and she consistently provides an easy link for viewers to register to vote. She asked Charley if she's registered and the answer was "not yet," because she's only 11. But, we can be sure Handler will make sure her niece is registered by the day she turns 18.

As Charley co-hosted, one of the guests was Bill Clinton's former advisor James Carville. Although both Handler and Carville poked fun at Trump (because, how can you not?), the main focus of the interview was how to defeat him on Nov. 8 and what strategies should be used by the Democrats. Throughout the season, Handler has set a great example for her niece (and young girls everywhere) that we can't simply laugh off the Trump campaign because it's a very real threat to our country and our values.

Handler is also very thoughtful in how she chooses her celebrity guests. Although the show consistently features actors, they're not usually there to focus on their latest projects. For example, Tony Hale discussed Veep for a hot second before getting into the serious topic of human trafficking and what we can do to prevent it. Similarly, Wanda Sykes and Robbie Rogers emphasized the importance of LGBTQ rights and Pitbull appeared to talk about his charter schools and our education system rather than his music. So, although she does frequently feature celebrities, they usually spend a great deal of time discussing important topics and providing links and tips for what viewers at home can do to help.

Chelsea is a feminist show on many levels and she sets a great example for young women who are shamed for not going the "traditional route" because we don't want to get married or have children. Furthermore, she consistently drives home the point that women should support other women — and she's doing just that by being an amazing mentor to Charley. The episode illustrated the important point that we don't need to be mothers in order to have a major impact on the young girls in our lives. As a new aunt, I sadly won't be able to bring my niece onto a comedy show anytime soon — but I hope I can be a great role model for her just like Handler is for Charley.

Personally, I can't wait until Charley gets her own show. I bet she'll give her aunt a run for her money — and Handler will be her biggest fan.