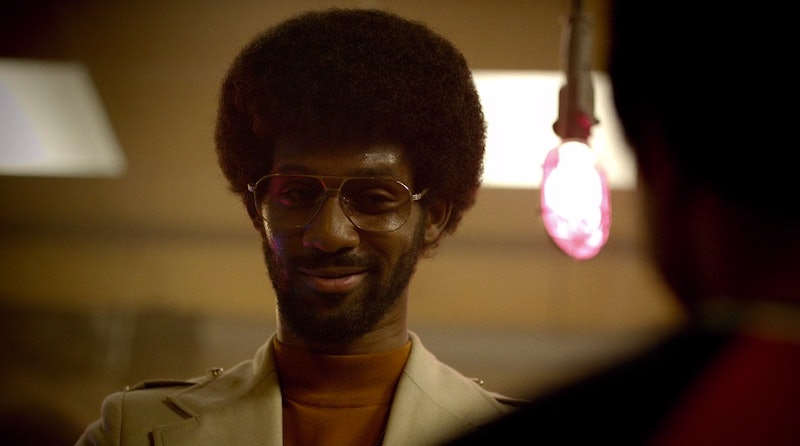 Netflix's The Get Down is a fictional tale taking place in the real history of The Bronx during the birth of hip-hop. As such, the fictional characters that anchor the story often cross paths with major figures from New York in the late'70s. With no clear distinction, it's difficult to determine what is fiction and what is truth. One of The Get Down's recurring characters, Grandmaster Flash, is, in fact, a very real and influential DJ who helped create and popularize hip-hop and happens to serve as a creative consultant to the show, but what about some of his contemporaries? In the show, viewers are introduced to a rival of Grandmaster Flash's, and it turns out that DJ Kool Herc is a real person.

Early in the series, Shaolin Fantastic speaks on the three kings of early New York hip-hop in the late 1970s — Grandmaster Flash, DJ Kool Herc, and Afrika Bambaataa. DJ Kool Herc himself shows up at the end of Episode 4 when Shaolin's attempt to catch a bootlegger lands him crashing one of the DJ's parties. And, DJ Kool Herc is, indeed, a real figure in hip-hop history, but it would be more accurate to call him Grandmaster Flash's mentor than his contemporary.

The DJ technique that Grandmaster Flash teaches Shaolin Fantastic — playing the same record on two turntables simultaneously and syncing them up to create an extended version of the song's "get down" — was actually a technique invented by Kool Herc, which you can hear him explain in the above video. While DJs like Grandmaster Flash and Afrika Bambaataa expanded on the development that Kool Herc made, Herc himself was the revolutionary mind that helped start the hip-hop movement.

DJ Kool Herc, real name Clive Campbell, is portrayed in The Get Down as a peaceful spirit who loves throwing parties with his family and intends to provide music as an alternative to the drugs and violence that littered the streets of the Bronx. Kool Herc himself, although one of the most important figures in music of all time, barely has any releases to his name. Unlike modern hip-hop music makers like DJ Khaled, Kool Herc seemed content to stay out of the studio system and just make music for those around him. Still, the invention of the isolated get down or, as they were more often called, "breaks" of a song is a key moment in the legacy of hip-hop music. So, even though DJ Kool Herc doesn't have many studio releases to his name like his contemporaries Grandmaster Flash and Afrika Bambaataa, it's impossible to talk about the early days of hip-hop without mentioning him.

DJ Kool Herc's appearance in The Get Down was brief but memorable. It didn't delve very deeply into his personal life, but his mark is all over the music and culture represented in the show. The show was so dedicated to capturing the real Bronx in the '70s that director Baz Luhrmann brought in Kool Herc, along with other New York hip-hop legends like Grandmaster Flash and Nas, as producers for The Get Down, according to Vanity Fair. Without DJ Kool Herc, there would be no such thing as modern hip-hop or rap, meaning there would be no Drake, Nicki Minaj, Desiigner, or countless other artists influenced by the genre. And, without Kool Herc, there would be no The Get Down, either. His involvement in the series shows its dedication to accurately portraying the early days of hip-hop. That's why it all feels so real, even when not all of the characters are.