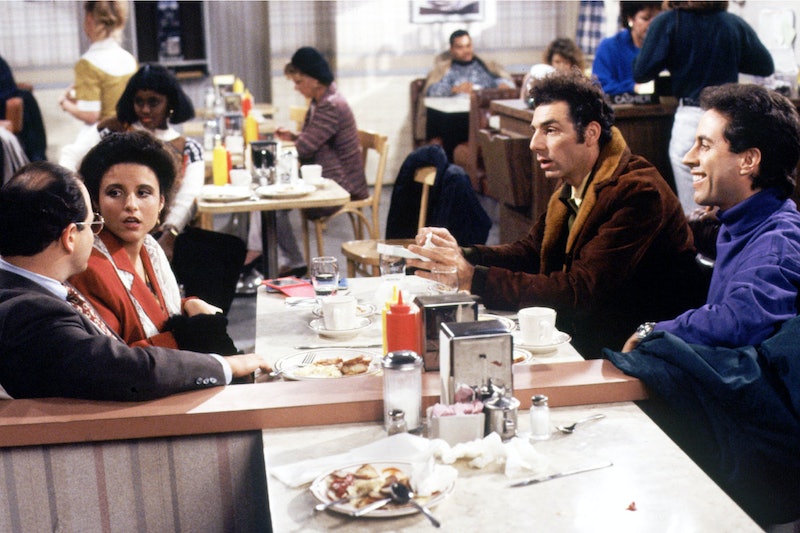 The '90s revivals just keep rolling in with everything from Full House to Rocko's Modern Life making a comeback. It is no surprise at all that at least one enterprising network tried to convince Jerry Seinfeld to bring back Seinfeld for a series of special live reunion episodes. Thankfully, according to The Hollywood Reporter, Jerry said no to a Seinfeld reunion immediately, and, yes, that is a good thing.

Seinfeld is an iconic show, and easily one of the best American sitcoms ever. I completely understand the thinking behind wanting to bring it back. People would tune in, and, if the episodes were live, it would be a major event. Let's face it, there are not many of those happening on network TV these days. However, Seinfeld is also perhaps the most uniquely '90s show ever made. It was a product of its decade from the look to the commentary on the frustrations of day to day life.

Being so grounded in the era that it was made does not make Seinfeld any less enjoyable today. The show is an excellent example of how specificity can work in a show's favor. Just mentioning Jerry's puffy shirt, Elaine's sponge worthiness scale, and George turning Jerry's home phone into Vandelay Industries headquarters conjure up images of laugh out loud scenes from the show's history. Seinfeld is so embedded in the American psyche many people still celebrate Festivus every year — there is no risk of the show being forgotten anytime soon.

If memories of the show make you grin, think about a modern Seinfeld. Imagine Jerry complaining about how comedians just throw together YouTube videos and call it a day now, or George being in a constant state of rage over his casual sexism actually getting him into trouble. In so many ways, the world has left Seinfeld's era behind, and it is better off for it.

As much as the '90s are greeted by nostalgia by those who grew up during the decade, being an adult in the '90s was in no way the same as being a kid. Revisit Seinfeld now, and you see the stirrings of social consciousness rubbing up against the established norm. One of the most glaring examples is "The Outing," the episode where George and Jerry's anxieties over being perceived as being gay clash with their anxieties over being perceived as being homophobic. It is hard to imagine the episode making sense in a modern setting where no one would ever need to anxiously say "not that there is anything wrong with that" while vehemently denying they are gay. It is 2016, and, while things are not perfect, most of us have progressed past such nonsense — and past being willing to stand for it in our media.

Happily, Jerry has always looked after Seinfeld's legacy, and he is an amazing caretaker. He did give the world an extremely meta reunion in Curb Your Enthusiasm, and it was a perfect compromise. Shows end, it is the natural order of things. Some shows can come back and adapt to the landscape around them as if they never left, but Seinfeld is not one of those shows. Seinfeld is the '90s, and no one should ask Jerry, Elaine, George, and Kramer to navigate yet another strange new land when they already wrote the guidebook for one decade.