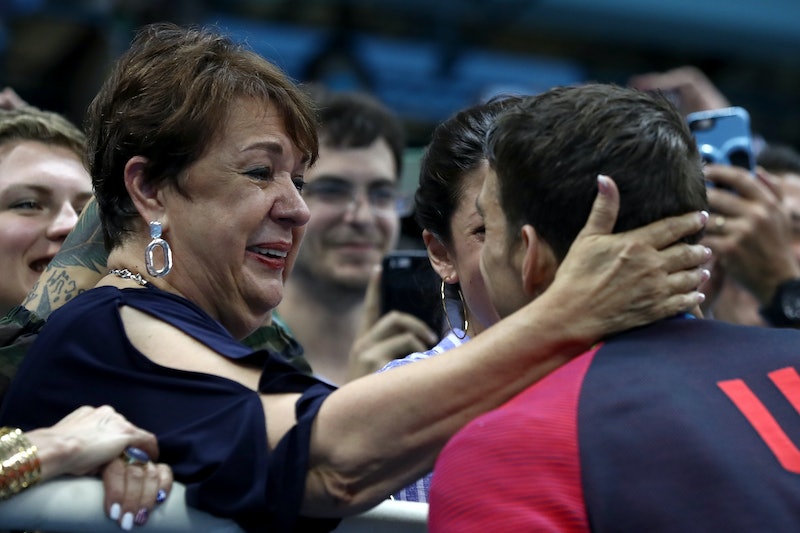 When an Olympic victory cannot be put into words, there are often tears of joy instead. Tears from the victors, tears from the coaches, and tears from the Olympic athletes' families, whose reactions to seeing their loved one win an Olympic medal are unparalleled. To know how hard your child, your sibling, your significant other worked to get where they are today — the years upon years of training, the relentless dedication, the rearranging of their entire life to revolve around their sport — to be there in the moment when all of the sacrifice and all of that effort pays off... the pride just bursts, and often into tears.

There are Aly Raisman's parents, of course, whose reactions to watching their daughter in every gymnastics event are so nerve-wrackingly relatable that they consistently make headlines. There are also Olympic mainstays like Michael Phelps' mom, who is so expressive when cheering on her son, the greatest swimmer of all time, that I'm frequently surprised that we can't hear her yells of pride all the way from Brazil. And then there are the other countless Olympic relatives out there watching their loved ones bring home a medal, a moment filled with such pride that they can hardly contain themselves — and most of the time, they don't.

Check out Olympic athletes' families reacting to their loved one's wins in Rio.

Michael Phelps' mom and sisters are fixtures at every Olympics the swimmer has ever competed in, always there to cheer on their son and brother and sob from happiness as he inevitably sweeps the gold. This time in Rio was made even sweeter, however, by Phelps' fiancée Nicole Johnson and son Boomer being in the audience — an enormously emotional moment for everyone involved, particularly when Phelps held his baby son in his arms after clinching his 21st Olympic gold.

Simone Biles' parents and sister absolutely dissolved into tears after the floor routine that scored her the individual all-around gold medal.

While Raisman herself broke down in tears after the floor routine, knowing she dominated the mat and had clinched the silver medal in the individual all-around, her ever-expressive family was equally as reactive. Her dad cheered loudly, her mom looked like she was going to pass out from relief, and her brother yelling in victory at the top of his lungs.

Ryan Held famously broke down in tears on the medal stand while receiving the gold medal for the 4x100 men's freestyle relay. And while his parents ~held~ it together while cheering him on, they were absolutely beaming with pride. Just look at his mom's smile when posing with her son (and some his new bling).

Truth be told, this video was taken before Lochte medaled in Rio — but this clip of his 95-year-old grandmother wheeling the Olympic torch around her nursing home is almost too heartwarming to handle. How proud she must be of her grandson!

After British diver Tom Daley scored the bronze for synchronized diving, his fiancé Dustin Lance Black DLB and Daley's mom also got pretty emotional in the stands too, embracing in a giant hug as soon as they found out that Daley and his diving partner medaled.

With her parents in attendance (see above), her cousins watching at home, her grandma proudly rocking an Olympic flag at her house, and her grandfather watching from above, gold medal swimmer Katie Ledecky knows a thing or two about family having her back.

Here's to you, Olympic families — for the gold medal in unconditional love and endless support.