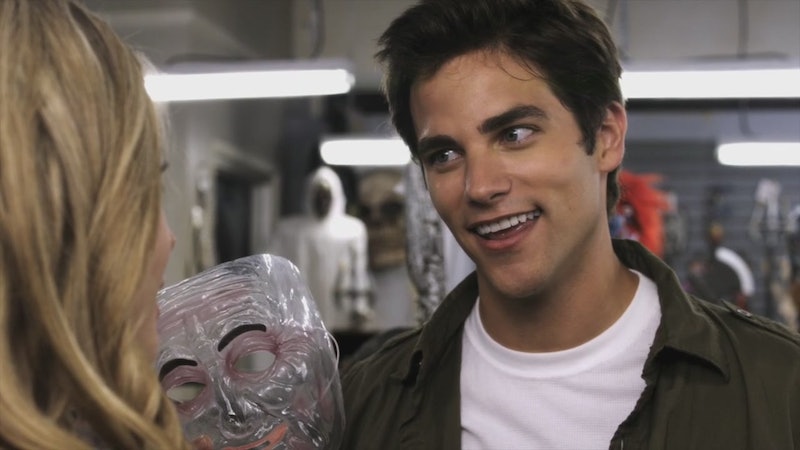 We're getting down to the final stretch on Pretty Little Liars, and in doing so we're getting closer and closer to the final A reveal. Of course, that doesn't mean that learning Uber A real identity is going to be a breeze. In fact, there are a whole slew of new suspects that we have to contend with. Season 7 has brought back some familiar faces, most of whom remain shady as ever. One person who definitely falls under the seriously shady checklist on Pretty Little Liars is Noel Kahn, an early A suspect who's back and more suspicious than ever. Noel went MIA for Season 6, but returned in the July 19 episode, "Along Comes Mary," for... something. His unexplained presence alone seems like proof that Noel Kahn is A.D., but it's definitely not the only evidence.

Though we don't know why Noel made his triumphant return to Rosewood, we know that he was meeting up with Sara and Jenna, and possibly staying at the Radley with the latter. We also know that Noel was calling a mysterious Dr. Cochran in the Aug. 9 episode, who BuddyTV reports was the very same doctor listed as delivering Mary's second child. That was enough to get the Liars on the Noel-is-A.D. train, because if he has a connection to Mary's second child — or perhaps is that second child — he would have plenty of motive to find Charlotte's killer.

However, this is hardly the first clue that Noel has been the big bad we're looking for all along. Here are four more big pieces of evidence that prove we should be very nervous about the beginning of the Kahn game.

1. He's One Of The Few People In Town Who Actually Knew Charlotte

A.D. wants to avenge Charlotte's death, and while it's possible that the person was merely a relative who didn't actually know Charlotte, it's far more likely that A.D. had a legitimate relationship with her. Noel knew Charlotte (under the alias CeCe Drake) for a while, seemingly because she was longtime friends with his brother, Eric. Later, when Charlotte had to escape police custody in New York, it was Noel who made sure she got everything that she needed to leave the country. Was he really doing Alison a favor, or was he secretly helping out someone he deeply cared for — perhaps his biological sister?

2. Noel Has Secrets Too

Ah, yes — what are those secrets? Alison revealed to the other Liars that Noel was helping her stay out of Rosewood because he, too, had some skeletons in his closet. According to Noel, Alison was blackmailing him with these secrets — so could this secret be that his mother was in a mental institution and that he was really adopted? If that's the case, who knows what other Drake family secrets Noel could have been hiding this whole time.

We saw A.D. destroy Noel's file but keep Aria's, and while it definitely made Aria look awfully suspicious, it also could be a clue that connects her to Noel. Perhaps A.D. (Noel) wanted to get back at his ex-girlfriend for both A-related and personal reasons, hence taking her file.

4. He Knew Alison Was Alive

Alison left Rosewood for years, and only a handful of people knew that she wasn't the person buried in the ground. Noel was one of them... and so was Charlotte. Could that really be a coincidence, or could Noel have tipped Charlotte off to Alison's whereabouts? Perhaps Noel didn't pick up the A game after Charlotte died — maybe they were working together this whole time.

Whether Noel is A.D. or not, he's uber shady. Secrets don't stay buried in Rosewood for long, so it's only a matter of time before Noel's are exposed.