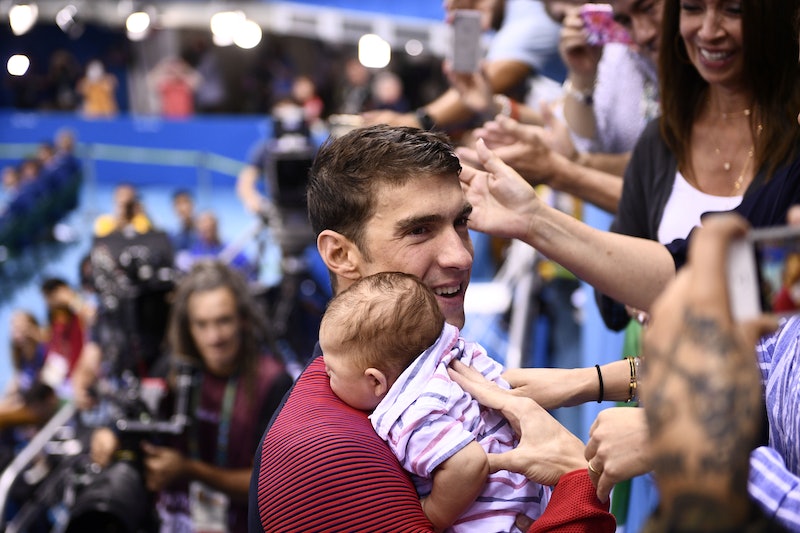 I am about to pose an important question, and I hope you take said question as seriously as I do: Who made the best face at the 2016 Summer Olympics? Obviously, it's far too early to hand out the crown, but it never hurts to begin thinking about it. I, for one, believe 22-time gold medalist Michael Phelps and son Boomer Phelps will land in the top 10. Now, anyone who has even glanced in the direction of Olympics news knows about The Michael Phelps Face. The face that Michael made before Monday night’s 200-meter butterfly semifinals as he watched opponent Chad le Clos dance around with the jubilation of 200 butterflies. The face that became the Michael Phelps angry face meme. And a tattoo. And a legend.

Which brings us to a very adorable picture of Michael’s precious infant son at the Olympics. In the photo, we see Nicole Johnson, Michael's fiancée, holding young Boomer in the stands during one of the five-time Olympian's bajillion races. Boomer, sporting an exquisite pair of patriotic noise-canceling earmuffs (gotta protect those li'l ears!), furrows his brow. A "don't mess with me" furrow if I ever saw one. The furrow is subtle, but it’s there.

Is Boomer making an intimidating face, à la one Michael Phelps? Yes. Yes, he is.

Boomer obviously learned from the best.