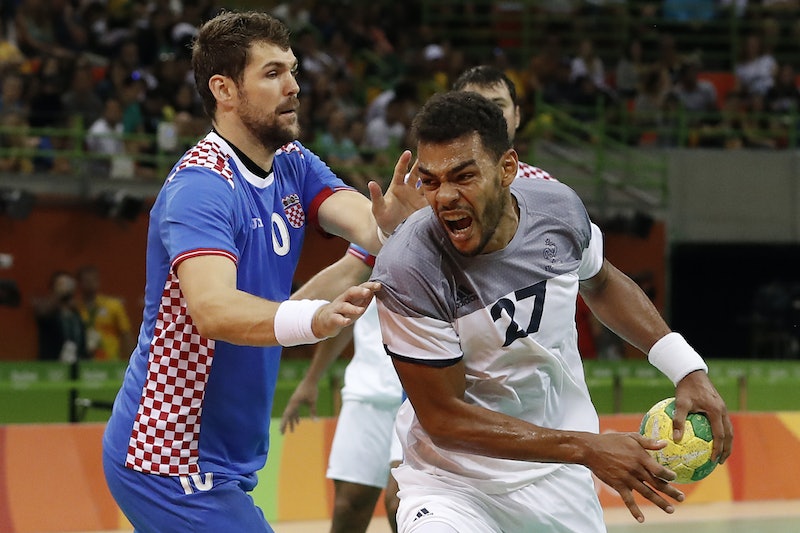 The United States is not known for its Olympic Handball Team. In fact, if you asked a random person on the street to explain the rules of handball to you they would probably search their memory banks and either confuse the game with dodgeball or vaguely recall playing it on the playground. Handball is a nice game, they would say, you just try not to hold the ball for too long and then throw it past the goalie the first chance you get. Easy, right? Wrong, so, so very wrong as the many astonished tweets from confused Olympic viewers watching Saturday's super intense handball matches can attest.

Handball is brutal. It is like dodgeball, soccer, and hockey got together and had a super aggressive baby. While watching it you will likely be in a constant state of anxiety over whether or not the goalies will survive the match. The palm-sized ball flies around like an errant weapon of mass destruction while the players practically pummel each other as they zip towards the goal. If a foul is actually called, someone is probably bleeding. Olympic handball is the stuff of nightmares for gym class hating kids everywhere.

Thankfully, you don't have to play (or understand) the sport to appreciate the Internet's hilarious response to it. These 13 tweets from people who just realized Olympic Handball is a thing will make your day.

1. This Person Who Is Desperately Trying To Make It All Make Sense

Handball is a game unto itself, so confusing it is compared to literally every other sport on the planet.

2. This Person Who Figured Out How To Make Handball Relatable

For the sake of the other team, I hope there's no relation.

3. This Person Who Is Onto Something

This is an accurate statement.

4. When The Violence Got Too Real

Handball: the sport where there is an excellent possibility someone will step on your head.

5. This Person Who Is Definitely Glad Her Gym Teacher Didn't Watch Olympic Handball

There was a time when handball was so young and innocent. Where did it all go wrong?

6. When This Guy Made A Flawless Joke

Poor handball, it's like you when your parents won't stop comparing you to your overachieving cousin at Thanksgiving.

7. This Guy Who Has A New Life Goal

8. This Person Who Has A Brand New Addiction

Make handball happen in America should be a trending hashtag. Get on that, interwebs people.

9. This Woman Who Exposes Handball For What It Is

Olympic Handball teams are where all the scariest kids from gym class ended up.

10. This Person Who Gave Up On Handball & Started Playing Where's Waldo Instead

To be fair, you have a better chance of finding Santa Claus in the crowd than understanding the rules.

11. This Person Who Appreciates Just How Serious This Game Is

Suck it, water polo — sorry, I didn't mean that, you are lovely, water polo, I've just been watching too much handball.

Describing handball should be its own Olympic sport.

He totally has a gold in handball, I mean, how could he not?

Stay safe out there, handball noobs.