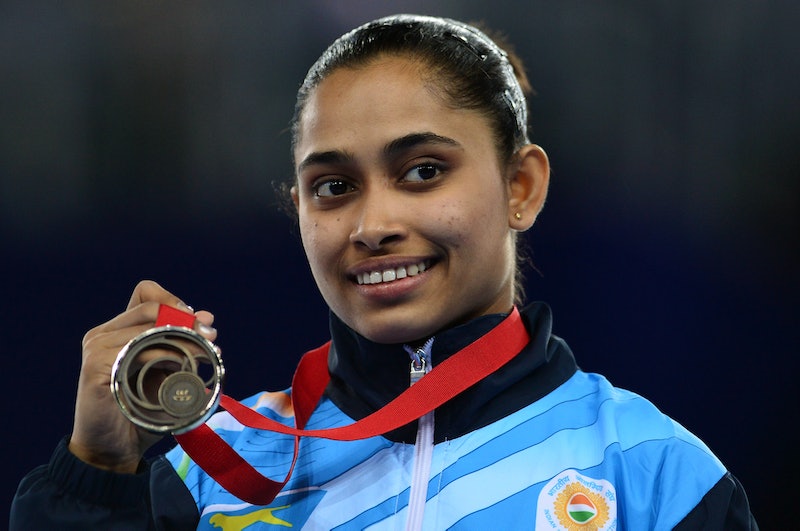 The Olympics are full of inspiring stories about athletes who defied the odds to represent their country at the most prestigious sporting event there is — but even amongst a sea of talented Olympians, Dipa Karmakar stands out. Karmakar is the first female Indian gymnast to qualify for the Olympics, and, as a result, she is breaking ground for Indian girls who dream of going to the Olympics. That said, nothing about Karmakar's journey has been easy.

In the small northeastern state of Tripura where Karmaker grew up, sports were not a priority, and there was nowhere for the budding gymnast to practice. The only facilities in place were in a state of disrepair, but thanks to her father and with the help of her coach Biswaswar Nandi, Karmakar found ways to practice every day. In an interview with NBC, Karmakar explained, "We just don't have any infrastructure over there, especially when I started off during my childhood. All the equipment we had then was (made in) India ... not good for learning any jumps which had a great difficulty. I was lucky I had a great coach, who helped me learn all the basics that one needed about vaults ... he prepared me so well."

It wasn't just a lack of equipment Karmakar had to overcome. According to NBC, she also had to deal with having flat feet which makes gymnastic routines difficult. Nandi began creating exercises to help with her feet and teach Karmakar new ways to pursue her goal of becoming a gymnast. Her hard work paid off in 2014 when she took home the bronze medal at the Commonwealth Games. No Indian woman had ever won a gymnastics medal before Karmaker vaulted her way into history.

The moment Karmakar qualified for the 2016 Olympics, she became a national hero in India. Whether she takes home any medals or not she has broken down a barrier just by being in Rio, and she's proof that if young women have drive and passion, they can overcome any obstacle put in front of them.

Of course, Karmakar is not content with simply being at the Olympics. She is a consummate athlete who is always pushing herself to perfect her routines and try new things. Karmakar's specialty is the vault, where she made another kind of history in the 2015 Asian Championships: She became the third woman in history to land the dangerous and highly difficult Produnova vault.

Named for Russian gymnast Yelena Produnova, who became the first gymnast to stick the landing for the controversial move in 1999, the Produnova vault consists of a front handspring and two and half somersaults before landing. The move is extremely dangerous, and few gymnasts will even attempt it for fear of injury. According to her NBC interview, Karmakar practices the Produnova vault every single day.

Karmakar will attempt the Produnova vault again in Rio. She is one of only two gymnasts attempting the move during the 2016 Olympics (the other being Oksana Chusovitina of Uzbekistan). If she sticks the landing, Karmakar is almost guaranteed a medal thanks to the degree of difficulty attached.

No matter what happens, Karmakar has already made India proud. The gymnast is an inspiration not only to her country, but to any aspiring athlete who has the odds stacked against them.

More like this
Ryan Reynolds Brought Some Famous Friends To Wrexham A.F.C's Last Game Of The Season
By El Hunt
Jake Daniels Just Became The UK’s First Active Football Player To Come Out As Gay Since 1990
By Sam Ramsden
What Is Jeanie Buss' Net Worth? The Lakers President Is Uber Rich
By Hugh McIntyre
Sandra Bullock, Girlboss Extraordinaire
By Matt Harkins & Viviana Olen
Get Even More From Bustle — Sign Up For The Newsletter