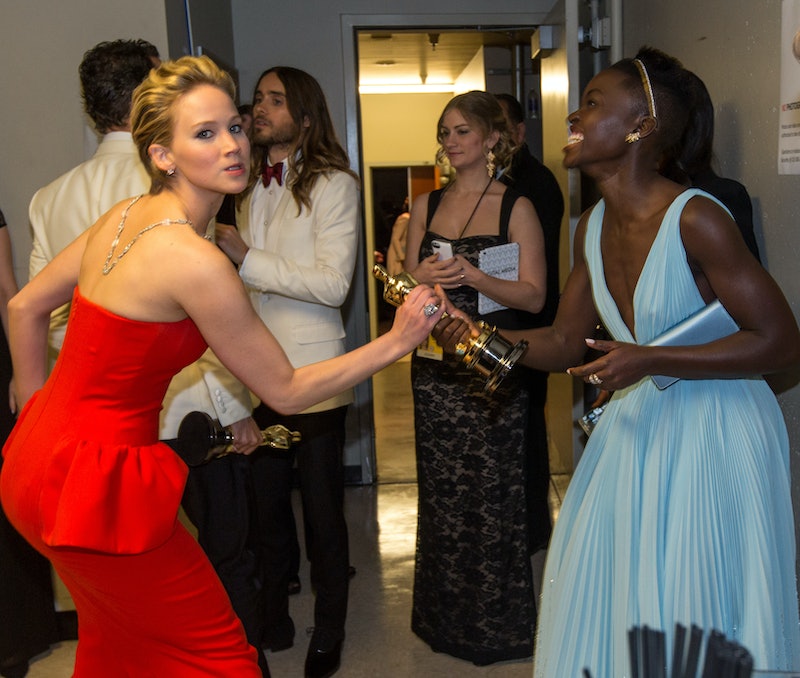 On the surface, 2013 appeared a tremendous year for women in film. We had Frozen, the Oscar-winning animated feature that taught young girls the importance of sisterhood over romance. Gravity was another Oscar-winning feature that boasted a female lead, and of course there was the second Hunger Games installment, Catching Fire. These three films encompass half of the six highest grossing films of the year. But let's dig a little deeper: Not only were all of these leading ladies caucasian (even the animated ones), but both Sandra Bullock and Jennifer Lawrence are two of the most bankable and beautiful women in Hollywood. Of course they're going to bring in the bucks.

Cate Blanchett won an Oscar for her knockout role in Blue Jasmine, but the film was pathetically only the 86th highest grossing film of the year, and Blanchett her self was amazed the film even did that well. During her acceptance speech, the actress thanked Sony Pictures, the studio behind the Streetcar Named Desire remake for "so bravely and intelligently distributing the film and to the audiences who went to see it and perhaps those of us in the industry who are still foolishly clinging to the idea that female films with women at the center are niche experiences. They are not. Audiences want to see them and, in fact, they earn money. The world is round, people."

Her speech was flawless, inspired, optimistic. While we words like Blanchett's, the facts remain black and white: Females comprised only 15 percent of protagonists in films in 2013. They made up 29 percent of major characters, and only 30 percent of all speaking characters. A study by Martha M. Lauzen states: "Female characters were younger than their male counterparts and were more likely than males to have an identifiable marital status. Further, female characters were less likely than males to have clearly identifiable goals or be portrayed as leaders of any kind."

So with such a sad, bleak and stereotyped representation of women in film, we would hope that film critics, those that drive the public opinion and help spike or lower the box office sales with their educated word, would be primarily female. If we can't be accurately represented in film, at least we should be the ones pointing out the inconsistencies and misrepresentations (or lack of representation) of women, right?

According to the same study, 18 percent of Rotten Tomatoes reviews were written by top female critics in the spring of 2013. What's even more shocking is that this percentage has fallen significantly. In 2007, 30 percent of critics on the site were women.

At a panel at NYU, notably held on International Women's Day, Slate critic Dana Stevens noted that journalism jobs in general are in danger. "But I also think the web, and social media opened up other avenues for criticism, making it a more democratic endeavor, and less of an elite point." She's right, but is this a good thing? Surely a democratic scale of criticism is favored, but how do we separate the professionals from the amateurs? The photographers from the filter-happy Instagrammers?

Another woman on the panel, New York Times critic Miriam Bale, offered a morbid opinion: "Can women save film criticism as an occupation? No, it's beyond hope," she said. "It's the only place I've seen that the rates get lower as you get more experience. But do I think women can save the culture of criticism? Maybe."

The Los Angeles Times' Inkoo Kang noted: "Having more women talk about what's in the film is very important in terms of countering the naturalization of male hegemony within the film culture." And I don't think many women would disagree. But these opinions sadly cannot change the fact that the number of women who are being paid to have their good opinion elevated is shrinking rapidly. Film is about culture and life, and what is culture without women?

There is no happy ending to this Hollywood tale, only an inkling of hope that the industry will see beyond the needs of fanboys and an nth superhero sequel. For now, as Self-Styled Siren blogger Farran Nehme says, our only hope for female criticism is bonding together: "What we can do as women in terms of making more voices heard is something as simple as linking, which is the lifeblood of the net. It's the easiest weapon we have at our disposal."

More like this
14 Women To Watch This Oscar Season
By Marina Watts
Is 'The Woman King' Based On A True Story? The Female Agojie Warriors Did Exist
By Radhika Menon
UK Viewers Will Have To Wait To Watch The Handmaid’s Tale S5
By Maxine Harrison
After 'Hocus Pocus 2', The Sanderson Sisters Are Coming to Broadway
By Radhika Menon
Get Even More From Bustle — Sign Up For The Newsletter