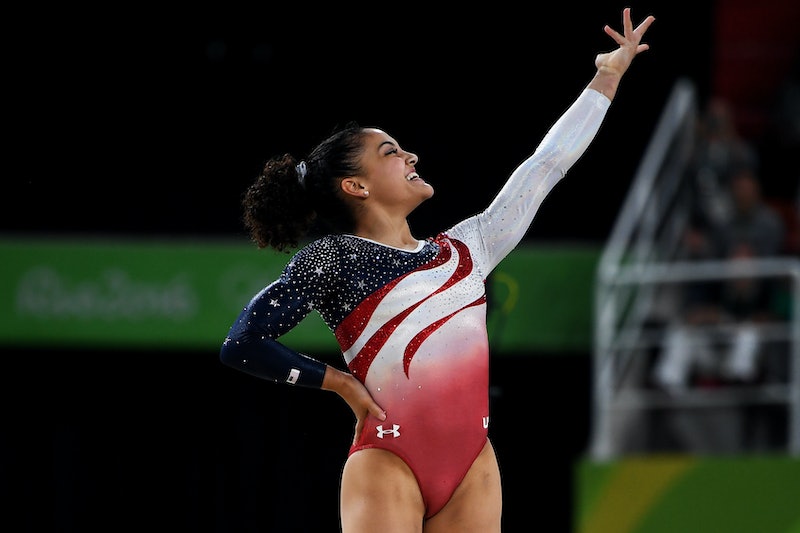 The highlight of Olympic gymnastics may be the floor routine. During the team final, Laurie Hernandez set the bar with her enjoyable and sassy performance, all of which was set to music. "Da Bop" by WTF! blared from the speakers in Rio and out of your speakers at home. It's not just flips and somersaults that hold your attention, but the catchy beat that infuses the whole routine with energy. But when the U.K.'s Max Whitlock won the gold on Sunday, Aug. 15, there was no music. So, why don't the men have music on floor routines?

The answer stems from Olympic history, and there may be a bit of sexism involved, too. When the modern Olympics began in 1896, only men competed. The Athens games did feature gymnastics, but the focus was on strength, not performance. However, that was not the case when women were given the opportunity to compete. A women's team competition was introduced in 1928 in Amsterdam but didn't reappear until Berlin in 1936. At that time, the event was very much in flux. Only in 1952 did women's gymnastics take on the form it has now, and one of the ways they feminized it was adding music to the floor exercise.

The differences between the men's and women's competition is even more striking when you look at the apparatuses that they use. The vault is truly the only one they have in common. The floor exercise would be the other similarity, except that the music and moves they practice are totally different. Aimee Lewis for BBC Sport explained the difference between men's and women's gymnastics as "an opportunity for the flexible and graceful sequined-wearing female to sparkle and the biceps-bulging male to test his strength and power."

But given that gender norms have changed outside of gymnastics since 1952, there may be room for this to change — if not yet at the Olympic level where the International Federation of Gymnastics would have to approve of the changes. One Ohio State college gymnast, junior Paris McGee Jr., performed Hernandez's floor routine with music at a summer camp at the university, thus proving men can execute a killer routine with music, too.

There are plenty in the sport, though, who would have to be convinced to introduce music. American Gymnast, a website that sells gymnastics equipment, even produced a YouTube video explaining the "Six Reasons Why Guys Don't Have Floor Exercise Music." Their reasoning doesn't hold up, though. It's six clips of uncoordinated men embarrassing themselves on reality TV auditions and home videos. About half end up face-planting and the remainder are far from natural dancers.

But just like Simone Biles can shine in the more technical aspects of her floor competition, there's no doubt there are enough men out there who could try and move to the beat, especially if a gold medal were at stake.