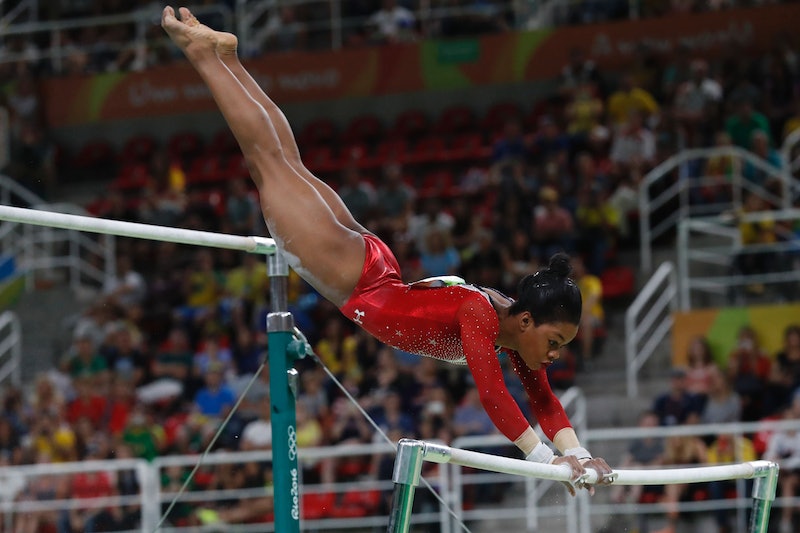 This is so not okay. According to USA Today, social media critics ruined Gabby Douglas' Rio Olympics experience. Douglas, a three-time Olympic gold medalist, has received so much social media hate over the last week in Rio that she's had to speak openly of its effects. Douglas told reporters on Sunday, "I've been through a lot. But I still love them. I still love the people who love me, still love them who hate me, and I'm just going to stand on that," USA Today reported.

Douglas has received social media criticism for practically everything she's done since arriving in Rio. Her every move has been analyzed (even though the focus should be on the fact that Douglas is the first all-around gold medalist to return to the Olympics since Nadia Comăneci did so in 1980). Much of the criticism began after Douglas didn't place her hand over her heart during the National Anthem, played in honor of the U.S. women's gymnastics team winning gold in the all-around finals. Of course, critics saw this as unpatriotic and heavily criticized the gymnast on social media — so much so that Douglas' mother, Natalie Hawkins, appeared on CNN to defend Douglas' patriotism. (In case any of the social media haters are wondering, Douglas comes from a military family. So it's not only rude that people are questioning the gymnasts' patriotism, but they're also clearly misinformed.)

When Douglas won the individual all-around gold at the 2012 London Olympics, she became the first African American woman to do so. Sadly, albeit unsurprisingly, social media critics made fun of Douglas' hair back in 2012, and USA Today reported that Douglas has received similar criticism during the Rio games. It's absolutely ridiculous that Douglas is a three-time Olympic gold medalist and people focus on her hair.

It's understandable why Douglas may be disappointed by her time in Rio. Although she came in third in qualifications, Douglas did not get to compete in the individual all-around competition because each country can only send two athletes to the event. (Simone Biles and Aly Raisman came in first and second in qualifications, therefore edging Douglas out of a spot). However, what social media did next was not OK, even if it wasn't surprising. During the individual competition, they criticized Douglas for not smiling enough as her teammates competed, and claimed she must be jealous of Biles and Raisman. First of all, it's time to stop telling women (athletes or otherwise) to smile more. Second, pitting women against each other is sexist, and it needs to stop, too.

On Sunday, Douglas apologized for not seeming supportive enough while her teammates competed, USA Today reported: "I apologize if what may have ... seemed to be me really mad in the stands [on Thursday]. I wasn't. I was supporting Aly, and I always will support them and respect them and everything that they do. So I never want anyone to take it as I was jealous, or I wanted attention. Never."

Needless to say, it's been a rough week in Rio for Douglas, but the saddest part is that it didn't have to be. Social media critics ruined the gymnasts' last Olympics. It would be entirely understandable if Douglas is avoiding the Internet right about now, but if she does venture on to social media today, Douglas will be met with a whole lot of love thanks to #LOVE4GABBYUSA, the hashtag created in backlash to Douglas' haters — love that the tremendously accomplished athlete more than deserves.