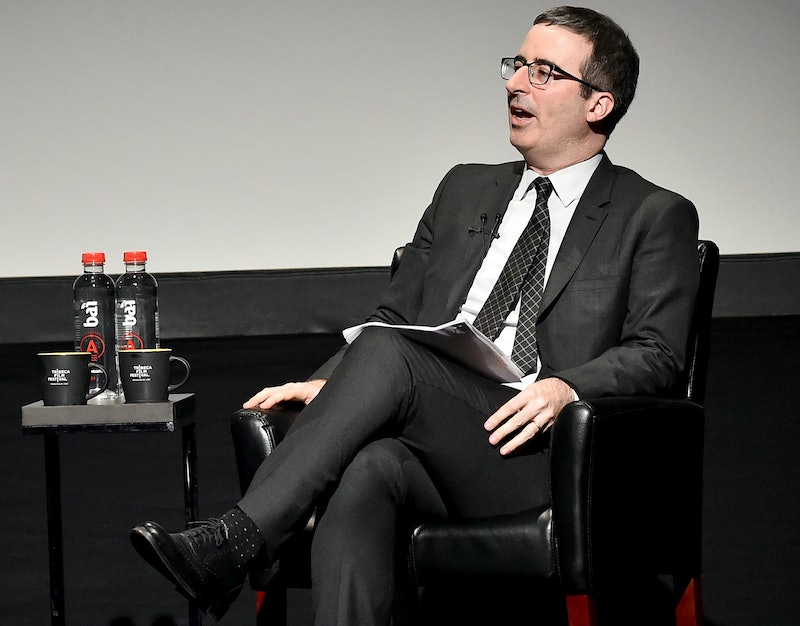 John Oliver is not impressed with Donald Trump's week. Sure, it's no secret that it's been a week full of gaffes for Trump, but in an Aug. 14 episode, the Last Week Tonight host pointed out that this was hardly The Donald's first bad week. In fact, Oliver is over Trump's failed campaign rebranding strategies, and he can't believe Trump is having another bad week.

According to the comedian, this wasn't just another rough week for Trump — "This was the 53rd consecutive week [Trump] was going to put his campaign back on track." That sounds about right to me. Yet in his Sunday night episode, Oliver did not focus on how wrong it is that Trump incited violence and suggested that "Second Amendment people" could do something about Hillary Clinton, which just proved (yet again) that he would be a dangerous president. Oliver didn't focus on Trump's next horrific statement of the week — that President Obama founded ISIS along with Clinton — either.

Instead, Oliver focused on Trump's response to the reaction he received from his absurd statement, because it couldn't have been a more ridiculous series of events. First, Trump stood by his statement about the president founding ISIS, saying, "No, I meant he’s the founder of ISIS. I don’t care, he was the founder." To which Oliver joked, "He’s so insistent! He’s like the guy drowning, but waving off a lifeboat, saying, ‘Get out of here, I’m very buoyant. I’m the most buoyant. Everybody talks about my buoyancy. I’m a tremendous floater!'"

But then Trump tweeted, "Ratings challenged @CNN reports so seriously that I call President Obama (and Clinton) 'the founder' of ISIS, & MVP. THEY DON'T GET SARCASM?" Of course, there was even more from Trump in a later speech: "So I said ‘the founder of ISIS.’ Obviously I’m being sarcastic…but not that sarcastic, to be honest with you."

Oliver wasn't going to miss an opportunity to respond to this: "He [Trump] walked his walkback back!" It's as if Trump created this week for Oliver's commentary. Oliver continued by directing questions to Trump: "What are you doing? You know that riddle where there are two people, one who always lies, and one who always tells the truth? Donald Trump is both those people at once."

Unsurprisingly, Trump's bad week gave Oliver more comic gold. After Trump claimed that Obama co-founded ISIS with Clinton, the Last Week Tonight host joked, "I will give Trump this: at least he made sure to include Hillary as co-founder — hashtag feminism, hashtag ISIS With Her."

Oliver also referred to Trump as "the owner of what you might describe as 'resting rich face.'" There was also the moment Oliver referred to the election as the "Lady Liberty convenience store robbery gone wrong descending into a hostage situation and now she's demanding a chopper 2016." Not totally sure what that was all about, but at least it made more sense than Trump's campaign.

This was another disastrous week for The Donald (once again showcasing how horrible the GOP candidate really is), but at least we have Oliver to get us through by showing Trump just how ridiculous it is that his weeks consist of one gaffe after another. At this point, it's as if Trump is running his campaign specifically as comedic fodder.