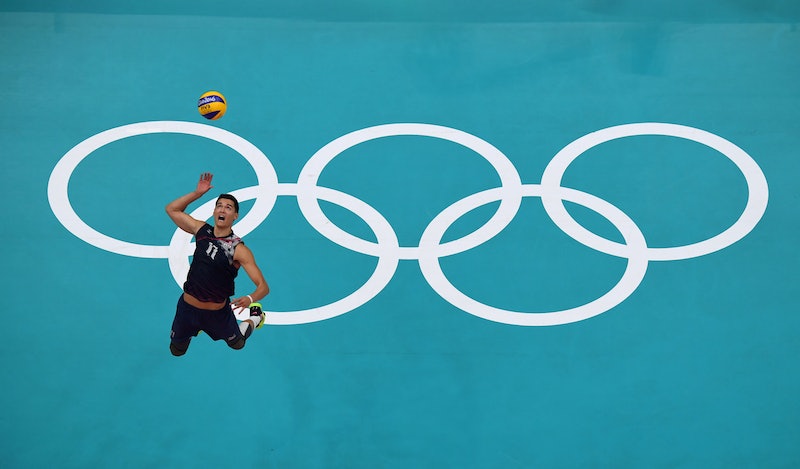 The Olympics are filled with stories of athletes who have dedicated their entire lives to a sport, who have sacrificed everything, and who have truly pushed the limits of what humans can do. Honestly, I spend most of the Games crying because I am so in awe of these extraordinary people — but for the more practical-minded, the question of how much Olympic athletes make has surely arisen at some point. It's absolutely a fair question: If these folks live a life dedicated to, say, volleyball, how are they paying the bills? They don't live on a cloud of hopes and dreams and their nations' flags, despite how we like to portray them in the media.

As it turns out, most Olympians live relatively frugal lives, while some may actually seriously struggle financially. In 2012, for example, a study of the top U.S. track athletes found that the average competitor made less than $15,000 a year from their sport. You know who can live on less than $15,000 a year in the United States? Barely anyone. You know who can hold down a full-time job while training five to six hours a day? Barely anyone.

There are several income sources when it comes to representing your country on a global scale at the Olympic Games: The medals themselves, making the podium, and endorsements. Endorsements, in theory, are an athlete's golden ticket — and they're just as rare as the ones in Willy Wonka. So if you're interested in how Olympic athletes actually, um, afford to be Olympic athletes, read on.

The medals themselves are worth money, but the price they can fetch is honestly a drop in the ocean compared to other forms of income that arise for many Olympians. If we're going by purely the worth of materials, a gold medal is worth about $600, a silver medal around $300, and a bronze medal less than $3. But obviously, the winning of the medals (and who does the winning) imbues them with additional value, so if it helps to think of them more as memorabilia or items of cultural significance than about their strict dollar amount.

Oh, and fun fact: American Olympians now have to pay taxes on their medal's actual worth. I bet the bronze medal winners are feeling pretty smug right now.

While athletes are not actually paid by the International Olympics Committee (IOC), each country's National Olympic federation offers up monetary rewards for medal winners. The purse differs pretty dramatically and tends to reflect the number of winners a country generates per Olympic cycle, the cultural value of winning, and potential outside opportunities an Olympian has for revenue.

For example, in the United States, a gold medal winner makes $25,000, while a silver medalist makes $15,000 and a bronze medalist $10,000. Which, yes, seems like a lot — but in comparison to, say, Singapore, whose gold medalists each make 1 million SGD (roughly equivalent to $600,000), it's a bit paltry. (Also, that is literally the first and last time I will ever say that thousands of dollars is unimpressive. If anyone wants to send me a few thousand dollars, I will obviously not object.)

Particularly for American athletes, endorsements from major companies can mean serious money. Get one, increase your "household name" standing, and you'll continue to land more. Land a bunch, and you won't have to actually pay for competition gear. It's a sweet gig. It's how athletes can actually afford to compete.

But, unsurprisingly, who actually lands endorsements is dictated by the cultural value of a sport, the likeability of an athlete, oh, and the underlying racism and sexism prevalent in the American media. Claressa Shields, for example, has spoken out about the fact that, as a Black woman from Flint, MI who is unabashedly confident, it's been difficult to land major endorsement deals, despite her 74-1 professional boxing record and her role as the first American woman to win a boxing gold medal.

Of the 16 highest-earning Olympic athletes descending upon Rio this year, Serena Williams is the only woman to make the list.

What an Olympian earns in the off-season (and keep in mind, the majority of their lives are spent in the off-season) is heavily dictated by what sport they compete in. Sports with professional, high-profile leagues, like basketball, tennis, hockey, and, to a lesser extent, soccer, have a number of athletes who can afford to exclusively Be An Athlete. That's their career. They're living the dream.

In addition, sports that require year-round conditioning and super long gym hours (I'm looking at you, gymnastics and swimming) have national organizations who have monetary support built into their infrastructure. USA Swimming, for example, provides the equivalent to a teacher's salary ($30,000 a year) to the top 12 athletes in each event.

And finally, there are the rare athletes who are able to represent Team USA in one sport, and compete in another, better-paying one for the remainder of their lives. Nate Ebner, for example, a rugby sevens player, is also, casually, a player for the New England Patriots.

So, the answer to the question, "how much does an Olympian make?" is actually a little complicated — but what it ultimately comes down to is that it's probably not as much as you think.

Then again, that feeling as you literally rest on your laurels at the top of the podium after taking the gold medal in your event? That's probably hard to put a price on.