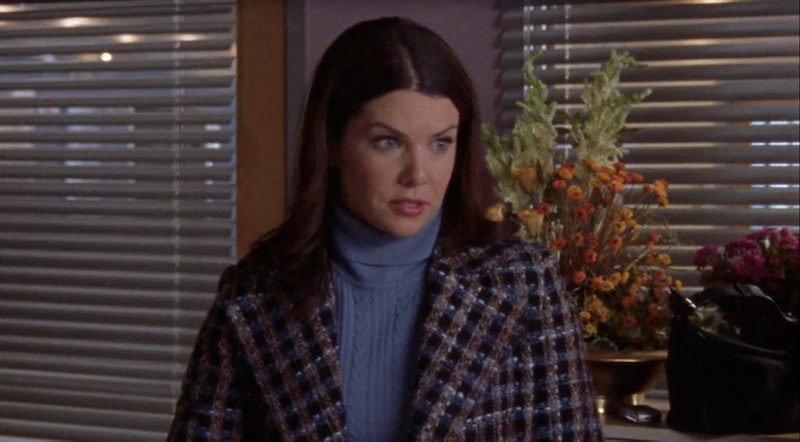 I spend a lot of my time recently doing one of two things: marathon watching Gilmore Girls in preparation of the four episode Netflix revival and being amazed about everyone’s journey throughout the series, from Kirk to Lane and back again. I have to say, though, I’m really excited to see how Lorelai changed since the pilot episode of Gilmore Girls . Because, although it feels like young Rory was on the precipice of starting her life, Lorelai was at a fascinating crossroads of sorts, too. See, as her family dynamics changed, so did she.

Now I’ll be honest with you: Lorelai didn’t do a full personality revamp over the course of Gilmore Girls. She remained vivacious, fast-talking, over-caffeinated, and somewhat selfish throughout the series run. Consistency is what makes Gilmore Girls great (and lack of consistency is what makes season seven a hot mess). However, there are subtle shifts in Lorelai’s relationships and accomplishments that show she’s not quite the same woman we see in the pilot, and it's amazing to watch.

And just in case you need a refresher course (read: somehow don’t have time to marathon watch the series before November 25), here are just a few ways that Lorelai changed over the course of the series.

1. She Realized When To Suck Up Her Pride

When Sookie broaches the possibility of Lorelai borrowing money from her parents, Lorelai tries to shut that conversation down — she's worked too hard and ran too far from the Gilmores to draw from that (incredibly deep) well. However, she eventually caves and asks for their help in funding Rory's tuition (with an emphatic promise to pay them back). It's an important move because it serves as the catalyst for Friday Night dinners, but it also shows how Lorelai is willing to sell her soul a little for the benefit of her daughter. Likewise, when Christopher gets his inheritance a few seasons later Lorelai has no qualms about him picking up the tab for Yale.

In short, Lorelai is able to realize that accepting help does not undermine her position as a (mostly) self-made woman (that is, a single mom, high school drop up who worked her way up the ranks in hospitality).

2. She Reconciled With Richard And Emily

Listen, I'll be confused if Lorelai and Emily are mainlining lo mein from Al's Pancake World and having Donna Reed nights in the revival. The nature of their relationship will always be combative and a little tense in order to contrast with the Lorelei-Rory dynamic. However, once Lorelai agrees to Friday Night dinners, she gradually starts to repair the relationship with her parents, eventually finding a place for them in her heart and home. While Lorelai laments the deal of Friday Night dinners in the pilot, she's able to pencil them into her schedule by the end of the finale, without the obligation.

3. And Was Able To Merge Their World With Her World, Albeit With Biting Commentary Along The Way

One thing that we'll fully delve into a little bit later is that, while Lorelai is completely resistant to the high-class ways of her family, Rory is not. In fact, the Yale-centric years show Rory leaning into that blue blood life. This provides some occasional troubles between the mother-daughter combo, but it also means that Lorelai gets roped into plenty of Richard and Emily hijinks along the way. This can be seen as early as the upper-crust Sweet Sixteen they throw for their granddaughter, and how they come to the jamboree that Lorelai throws for Rory the next day. Here, worlds are still colliding, but with time Lorelai learns how to mediate both backgrounds.

4. She Learned To Negotiate Being A Best Friend And Being A Mom

Even though the premise of Gilmore Girls is that Rory and Lorelai have a relationship closer to that of friends or sisters, there's actually a seismic shift in their relationship that occurs with the series opener. Once Rory shows a tangible interest in Dean, one nearly strong enough to throw off Chilton, Lorelai has to step up into mom mode:

"Don't get me wrong. Guys are great. I am a huge fan of guys. You don't get knocked up at sixteen being indifferent to guys. But, babe, guys are always going to be there. This school isn't. It's more important. It has to be more important."

Pre-Dean, it can be assumed Lorelai didn't have to have these kind of heart-to-hearts. Season 1 has Lorelai constantly freaking out because there isn't secrecy between the two of them, or lapses in judgement because of some boy (who doesn't even have a motorcycle). Rory is, as it's asserted a thousand times, a good kid. As Rory grows and starts acting on poor adolescent impulses (sleeping with married men, et al), though, Lorelai is forced to be the grown-up... as unnatural as that feels.

5. She Achieved Her Dream Of Owning An Inn

This is established as early as Episode 1, when Rory mentions that Chilton tuition might throw off Lorelai's desire to own a place of her own. It's a false concern, mind you (see: wants to stay in school because of motorcycle-less Dean), but it shows that Lorelai has true, respectable ambitions. Not only has she worked her way up from a maid to an executive manager by the time we leave her, but she's taking business courses to further her career. It's a sad day when the Independence Inn burns down in a fire, but a joyous day when Lorelai takes the Dragonfly Inn from the Weston family (um, R.I.P., Fran).

6. She Broke Down Her Romantic Barriers

Max Medina is the person who starts to crack this shell, but, lest we forget, Lorelai was very guarded when it comes to men in the early episodes of Gilmore Girls. She didn't let them into her sanctuary, she didn't really let them into her life for fear of them leaving and disappointing her daughter... I mean, you can see these immediately from the way she shuts down Joey-on-his-way-to-Hartford (although that guy was seriously Creep City). The Lorelai of later seasons has a larger romantic resume. So, to tap into that.

7. She Finally Followed Through On Getting Married

In terms of general achievements ("achievements"), it's something really worth noting. Not only because Lorelai endures two broken engagements over the course of this series, but because marriage is one of the things Lorelai runs away from... from age 16 onwards.

8. But She Knew When To Let Go Of Her Past... Specifically, Christopher

Ugh, Christopher. The two dance around each other for seven seasons because he's Lorelai's first love, and Rory's father, whatever. We get it. But it becomes clear, culminating with their ill-fated marriage, that's he's just not the one for Lor. Inheritance or not, there's such an unavoidable, noncommittal, deadbeat quality to Christopher that makes him a terrible fit in this family. Let him continue to send the checks, but, honestly, I'm so glad Lorelai finally cut this off.

9. She Saw The True Value In Luke Beyond Being A Coffee-Provider

The early aughts of Gilmore Girls saw Lorelai and Luke bantering at each other over a counter, the whole town watching sparks fly between them. Granted, Lorelai couldn't see him as a viable prospect in that first episode, when she demands a cup of coffee from the disgruntled diner owner. But, by the end of the series, the care Luke shows towards Lorelai (and Rory) solidifies him as The One. Lorelai can't avoid it: she will always love Luke. The karaoke proves it.

10. She Was Able To Put Distance Between Her And Rory

Now, mainly this was during dark times of conflict (post yacht-stealing, et al); the Lorelai we first meet is BFFs with her perfect little daughter, and I'm sure that she couldn't imagine they'd one day be living separately after a yacht-stealing incident. All that aside, in different ways, it's healthy that Lorelai and Rory got some time away from each other, with the series closing with Rory traveling cross-country sans her mother.

11. She Was Able To Care For Another Not-Rory Living Creature

Rory and Lorelai have passed pet adoption fairs in the past, and Rory constantly insisted that Lorelai isn't capable of owning a pet. When Paul Anka makes his debut in Season 6, it almost feels like an act of spite. But consider this, too: while Lorelai chose to have Rory, she didn't choose to be pregnant. Adopting Paul Anka, especially during her separation from her daughter, really shows what a different place she's in, how she's really choosing to be a mother all over again to fill that void.

12. She Could Distinguish Between Herself And Her Daughter

When Lorelai first hears about Rory's crush, she laments their similarities: "God, I'm so dense. That should have been my first thought. After all, you're me." But that's just... not true, or, as we've established earlier, Lorelai and Rory become more diverging personalities from this point forward. True, Lorelai has tremendous influence of her daughter; Rory's valedictorian speech more than validated that. However, the Gilmores have different goals, make different mistakes, and work to lead different lives. Lorelai and Rory have a bond stronger than ever when they part in series finale, but it's unavoidable that those Gilmore girls have grown... and I'm excited to see more of that growth in the revival.